The Martinique Surf Pro started today in shifting two-to-three foot surf at the iconic Basse-Pointe point break. Le Chaudron as the locals call it (the cauldron) didn't exactly cook the perfect waves we were all hoping for, but it still served pretty fun sets for some of the world's top QS athletes to shred.

In the men's opening round, scores stayed relatively low, but a few surfers managed to get close to the excellent range, Lucas Vicente was first with a 7.83 on a single attempt. He's young, he's light and on his backhand he lit up the rights for the day's best single-wave score. Lucas connects with the lip for a good score and his spot into Round Two. - WSL / Damien Poullenot

"I had been checking out the waves for a while before my heat and I realized the third wave of the set was the best," he said. "So I sat patiently and waited to select the right one. That wave was a little bit hollower with two or three bowling sections to get vertical. I love surfing backhand so I was stoked to be here on this fun right. After a month freezing in California that's a nice change of scenery."

A long-time threat on the European scene, Tristan Guilbaud brought his signature forehand carves and power turns to Basse-Pointe as well. The Frenchman dominated his first heat and advanced along with Canarian ripper Luis Diaz. Open-face snap 1.0.1. That should be a class, Tristan should be the teacher. - WSL / Damien Poullenot

"I'm stoked to be back in Martinique," he said. "The previous heats were pretty stacked with waves so I expected it to get quieter for ours, but it was fun we did get a few waves each. Luis and I battled for first but there wasn't any hassling so it was a really good heat to start things off in this event."

The current QS No. 8 Matthew McGillivray and former semifinalist here Luke Hynd were just two other qualifiers with decent scores out of the opening round of the men's event.

The women entered their first-ever round of competition in Martinique as well. Granted, waves weren't perfect, but three foot slightly onshore Basse-Pointe still beats a lot of the beach breaks on tour, both on power and fun factor.

After a low action Heat 1, things clicked into gear quickly in the following matchup. Meah Collins looked unstoppable, surfing faster than her opponents and pushing more spray out of each turn she performed. She posted an impressive 14.30 heat total, the biggest so far, out of both the men and women. 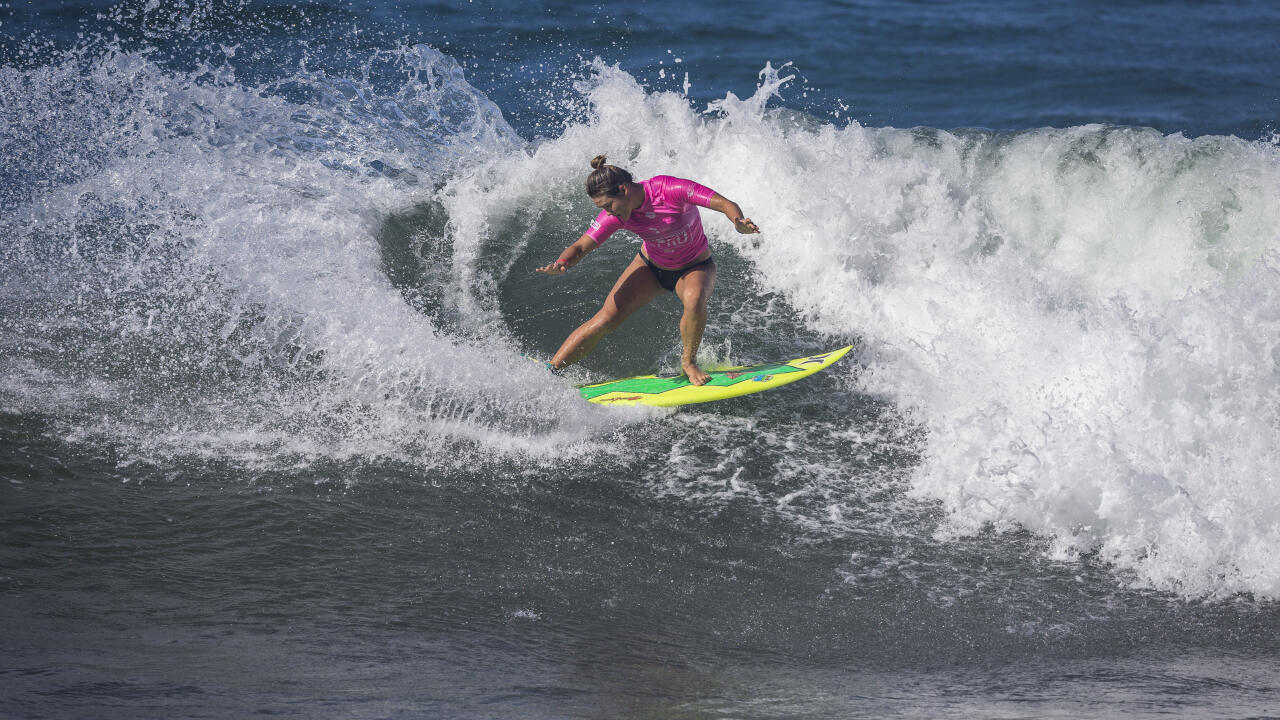 Tight turns in the pocket, and the repetition a bunch of times, Meah's recipe for an easy Round One win. - WSL / Damien Poullenot

"I felt lucky to have these waves and I'm really happy with that heat win," she said. "I have really good boards and I know that speed is a big factor so that's something I try to work on when I'm at home. My local break is not a point break but I do have access to waves similar to this around so I feel comfortable here. I might not have come to just Barbados, but with two events back-to-back in the same zone I didn't even think twice, this is a great opportunity to rack up points and confidence before the next big events."

Camilla Kemp and Samantha Sibley took out the following two heats without fireworks but Aussie rookie Sophie McCulloch got everyone a little excited again with a similar approach, destroying the long rights with good carves. Daylight became an issue towards the end of the afternoon and officials had to call the event off after Heat 6, leaving two more when we come back Sunday morning. The first call will be at 7:30 a.m local for a probably 8 a.m start.