The 2018 WSL Qualifying Series Rip Curl Pro Argentina was completed on Saturday and saw Wesley Santos (BRA) defeat hometown surfer Facundo Arreyes (ARG) at the QS 1,500 in Mar del Plata. Earlier in the day, Dominic Barona (ECU) had a thrilling victory to win the QS 1,000 over Josefina Ane (ARG), another local surfer in the Finals. Both Santos and Barona now lead the 2018 WSL South America rankings. Conditions were definitely a challenge today as waves in the 2-foot range (0.5 meter) and moderate sideshore winds made things difficult for the athletes at the Biologia jetty at Playa Grande. It seemed like in addition to talent, the competitors needed a bit of luck to be on the best waves during each heat.

After starting the morning by eliminating the talented up-and-comer Samuel Pupo (BRA) in the Quarterfinals, Santos followed by defeating Mateus Herdy, another Brazilian wunderkind in the Semifinals before taking down local hero Facundo Arreyes in the Final. Herdy and Sammy Pupo had been destroying the field of competition with their powerful rail-game and modern aerial maneuvers, but Santos had an unmatched rhythm on the final day of competition and seemed destined to reach the winner's podium.

"Wow, what an incredible feeling!" exclaimed Santos. "I've just felt great since early this morning. I woke up super happy, everything just seemed to click and I feel blessed to have won my first event on the QS. I mean, it was a hard road getting here. Nothing in life comes easy, but I've been committed and training hard and I feel like this is a result of all that hard work. I just want to thank everybody that's been supporting me, especially my family that never gave up on me." There was little doubt that the entire crowd at Mar del Plata would have been elated had Facundo Arreyes won the Final. Anticipation grew after he defeated an inspired Jihad Khodr (BRA) in the Semifinals. Khodr won the Rip Curl Pro Argentina in 2013 and looked like the man to beat throughout the competition. 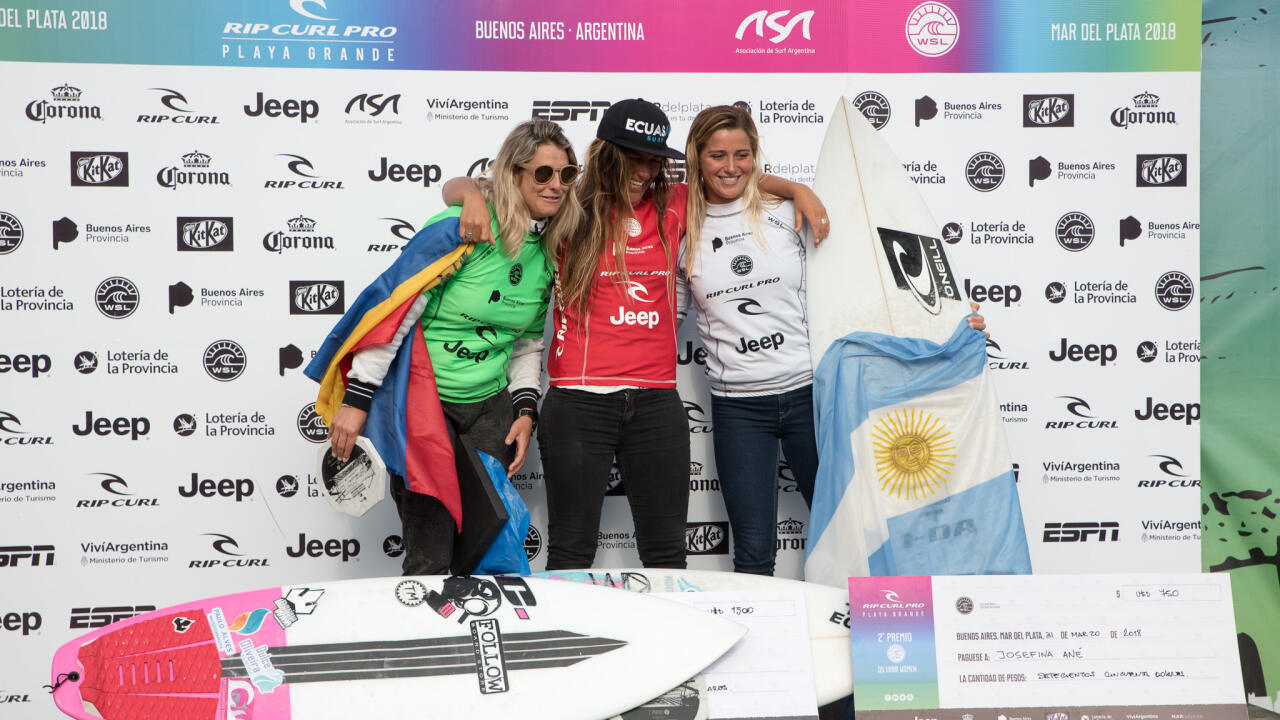 "I felt such amazing support from the crowd here in Argentina, but it's a little disappointing to come so close and not win the Final," said Arreyes. "But to be from Argentina and be a full-time competitor on the QS isn't easy. If someone does well in a competition, they receive attention. But I feel like you need to invest early, invest in the future to have a return. You can't expect a country to grow champions if you only invest in someone after they win a contest. But it feels amazing to do well here and a special thank you to my grandmother, who has shown me so much support over the years," Arreyes finished off.

The Women's QS 1,000 event actually began last year with Dominic Barona (ECU) winning her first title at the Rip Curl Pro Argentina over Melanie Giunta (PER). Once again Barona reached the Finals, this time over local surfer Josefina Ane (ARG). Barona won the first 2018 Qualifying Series event Peru and now has a commanding lead in the WSL South America rankings after her second victory of the year. "I feel so happy! I just feel lucky to have so much support from so many people. For everyone that's watching, this one's for you" Barona declared after becoming the first two-time event winner at the Rip Curl Pro Argentina. "And to be in the Final against Josefina (Ane) this year was amazing. She was injured last year and couldn't compete. She's like a sister to me and it was special to be in the Final with her."