Zoe McDougall's getting all-to-used to the feeling of a chair-up, but none have mounted to the prestige of a US Open win. - WSL / Sean Rowland

The Women's Pro Junior Final was a fast-paced, sprint to the finish as Californians Samantha Sibley and Kayla Coscino took on Hawaii's Zoe McDougall and Summer Macedo for a shot at returning the US Open title on home soil. McDougall and Macedo took control of the heat, trading the lead multiple times until McDougall's last effort in the dying minutes one aggressive, forehand maneuver that earned her a 6.83 (out of a possible 10) to emerge victorious over her compatriot. 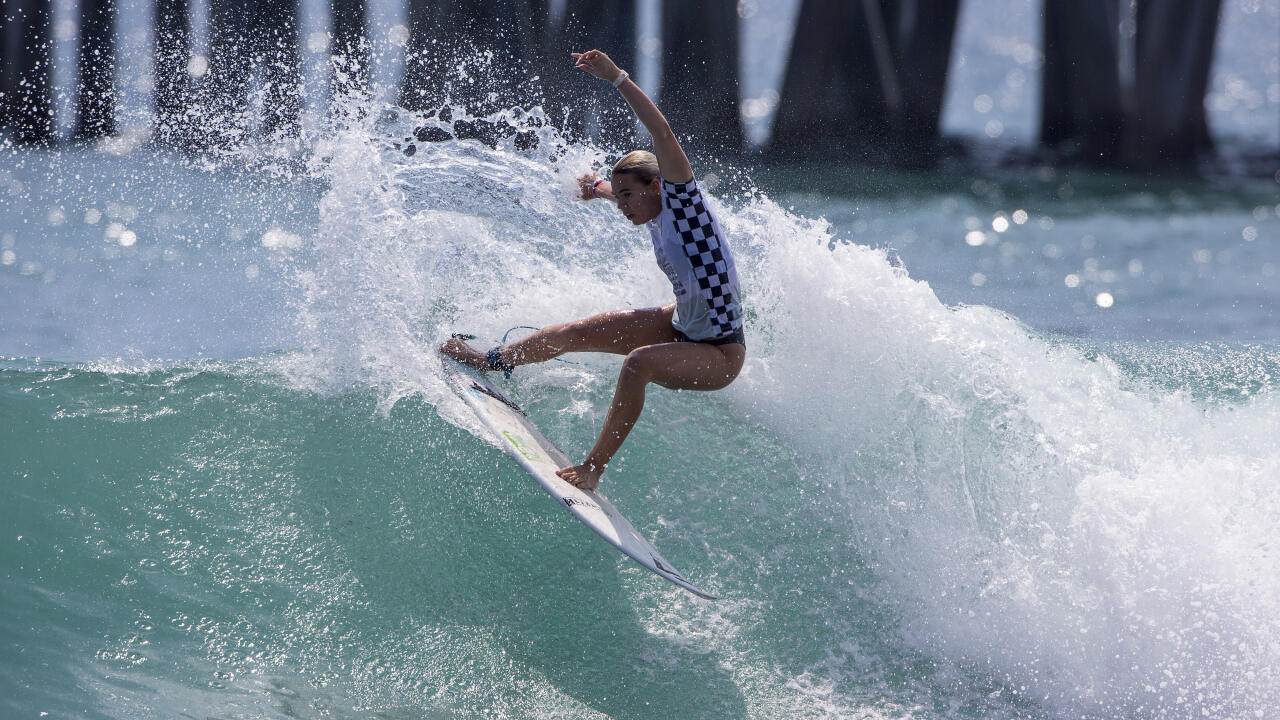 McDougall's forehand attack was lethal throughout the event and culminated in huge part to her victory. - WSL / Sean Rowland

"The atmosphere here is incredible and I couldn't imagine a better place to take a win," McDougall said. "The plan all along was to be standing here and I'm just so happy right now. I didn't know I had that heat until the horn blew. All those girls were ripping and just have Summer (Macedo) alongside me and to battle with her for the win, that was so fun. I just can't wait to build off this, it'll definitely be a highlight for me and hopefully someday I'll be on the stage for the Women's Championship Tour." Mamiya made it two in a row, not only today, but back-to-back men's titles as well for Hawaii. - WSL / Kenneth Morris

Mamiya's opening wave fell just short of eventual runner-up Cole Houshmand7.00 (out of a possible 10) opener, but just over the halfway mark the Oahu, Hawaii competitor launched out of the Huntington Beach shorebreak and earned a 7.73 to jump into first -- a position he would not let go of despite valiant efforts from Kade Matson and Alan Cleland. Houshmand's last-ditch effort in the final thirty-seconds fell short of the 7.40 requirement, earning a 6.67, and solidified Mamiya's victory for Hawaii's second-straight US Open Men's Pro Junior win. From jaw-dropping clips on his native island, and around the world, Mamiya's air-game continues to stun. - WSL / Sean Rowland

"I'm super amped to keep this event title in Hawaii after coming into it getting prepared for the QS, but to win is pretty special," Mamiya said. "There wasn't a lot of focus in the junior event since it's the first year I'm really going for the QS and now I'll take this confidence moving forward. I got a good result at the beginning of this year, but I've just been putting too much pressure on myself thinking I have to do well that I lost sight on enjoying it. Once I lost the QS, all the pressure was off and I just put everything into my surfing so I think that shows.The CT is my dream and I want to get there." Wrapping up an incredible first dose of Finals Day, reigning WSL Longboard Champion Blomfield continues to display her dominance across all forms of the sport with an inaugural Women's Duct Tape Invitational victory. It was all good vibes in the water as Blomfield shared the podium with runner-up, fellow Oahu competitor, Kelis Kaleopaa, third-place, two-time WSL Longboard Champion Jennifer Smith, and Longboard CT competitor Kaitlin Maguire. Blomfields 8.00, showcasing her style and noseriding ability before a final turn on the inside cemented her win before sharing a special moment with Kaleoppa.

"That was so fun and such an honor to be a part of," said Blomfield. "To win it is just that much more amazing,"Sharing a Final with a women like Jennifer (Smith), who's been such an impact on the sport, Kaitlin (Maguire) that I get to surf against on the Tour, and Kelis (Kaleoppa) is one my best friends, so it couldn't have been better. The fact that Kelis and I got to ride a wave in together was what that event represented for us -- just having a blast doing what we love. I can't thank Joel (Tudor) and Vans enough for that amazing opportunity."