The women's Qualifying Series (QS) is officially off and running in 2019 at the Florida Pro QS 3,000. International competitors in attendance at Sebastian Inlet, Florida, took over with dominant performances as swell began to fill in throughout the day.

The early goings are wrapped and a few things are certain -- no one is safe and it's anyone's game when a new year gets underway. The international contingent looked poised to takeover and they delivered some of the opening round action's finest surfing, looking to dismantle the locals in attendance.

Round 1's top performance belonged to Biarritz, France, native Neis Lartigue with a massive 15.26 (out of a possible 20) heat total. Lartigue locked in one of the highest single-wave scores with a 7.93 (out of a possible 10) en route to her debut win and had fellow competitors in a combination situation -- meaning they needed two new scores to total Lartigue's. Now that the nerves are out of the way, the Frenchwoman will be up first when Round 2 resumes.

"It was tricky at the beginning of the heat and I wasn't stressed, but I felt weird on my first few waves," Lartigue said. "I told myself to calm down and just surf my way. I prefer to go right, but my scores came on my lefts so I was just trying to stay busy. It's always a little nerve-racking to get the season started but I can relax today after getting a good heat total like that." However, Cannelle Bulard wasn't to be outdone by her fellow compatriot. - WSL / John Ferguson

But, it was her French compatriot Cannelle Bulard of Reunion Island that topped Lartigue in her Round 2 debut with an excellent 8.33 after freefalling from attacking the wave's lip. Bulard went on to earn the day's highest heat total of a 15.66. Though, the 25-year-old knows it's just the beginning and there's plenty of work to be done.

"It's really good to get off to a start like that in the first event of the year," Bulard said. "I would love to continue this kind of momentum. I watched the contest last year and it looked so cold, I was debating on coming but my friends talked me into it and I'm glad I did. It's great traveling with friends I've known for a very long time - to have that comfort and I think it showed in my heat." McCulloch started the day's competition in-form with a solid 12.67 heat total in Round 1 Heat 1 and carried that fire into Round 2 for a second victory. The Queensland native drew from her Florida Pro experience last year started building momentum early on. McCulloch's terrific Pro Junior career, earning multiple wins around the world, is behind her and now the 19-year-old only has one goal in mind this season.

"I was super keen on coming back after last year and I don't think the cold gave it the best impression, but I'm loving it this time," McCulloch said. "It was pretty important to get busy and settle the nerves right away. I got my groove and started finding those better scores, but it looked completely different even this afternoon [for my second heat]. My goal this year is to qualify. I think rather than focus on looking at the end result I'm just going to try and surf how I freesurf. Nerves got the better of me last year so my coach this year just said to me go out and just surf how you know how."

First Big Upset of 2019 Already in the Books Zoe Benedetto threw caution to the wind and it paid off. - WSL / John Ferguson

But, the day did not belong entirely to the foreign talent on hand as some of Florida's own made a case for themselves to hold the event title on home soil.

Early shock waves were sent through the event as local wildcard Zoe Benedetto helped eliminate former Championship Tour (CT) competitor Pauline Ado in Round 2 Heat 5. The 13-year-old smashed a closeout section and rode out clean to earn a near-excellent 7.67, catapulting her from fourth to first place. Benedetto had her expectations set coming into this event, but now boasts a win over one of the sport's elite.

"First event of the year and I beat a real professional surfer, I can't believe that," Benedetto said. "I wasn't really nervous about the people in my heat, but more so the waves because they were breaking ten feet from the shoreline at times. It feels good to win with my family and everyone here, and especially with me and my friends just wanting to beat each other all the time. I don't want to lose here or have a bad performance being the wildcard after losing first round getting it from WSL last year -- you want to earn that and prove yourself."

The Champ is Here: Caroline Marks Fires Out of the Gates 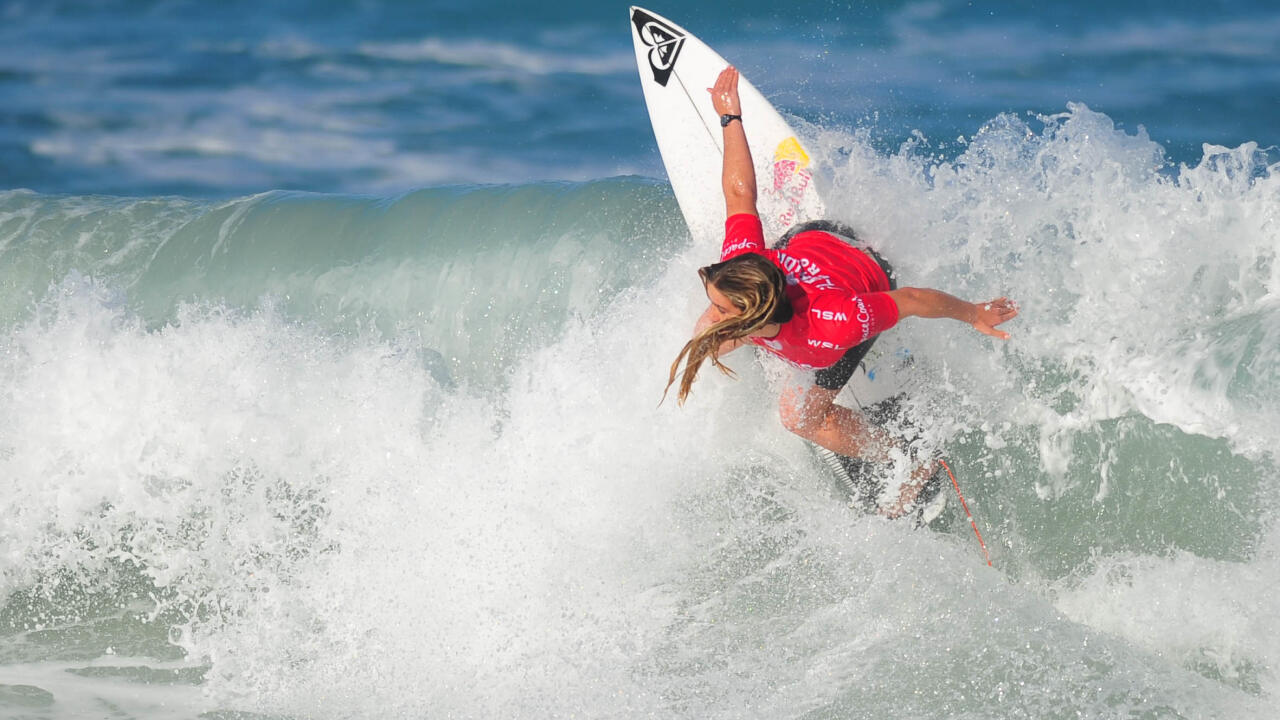 Marks picked up right where she left off last year in Florida with a pair of 7s to get started. - WSL / John Ferguson

The day concluded with defending event champion Marks returning to her native home state victorious in Round 2 Heat 8. The 16-year-old looked sharp in her debut and came out of the water wanting more despite garnering a 14.90 heat total. Marks is eager to defend her title among the talented field on hand and will look to improve moving forward.

"It's awesome to start the year off at home and I felt really good in the water, I just wanted to catch more waves," Marks said. "I'm such a frother and just want more and more every time, but I think that was a good first heat to start with. There's a lot left in the tank which is good and I felt like that was just a warm-up. It's so fun to surf heats again. I love competing and I'm really excited about the points on offer, as well as a lot of talented girls here so it's not going to be easy." It was redemption time for local Floridian Coral Schuster, who experienced one of last year's worst wipeouts, and she flourished in Round 1 with a heat win. - WSL / John Ferguson

Also advancing, Coral Schuster won her Round 1 Heat 11 bout and Rachel Presti buzzer-beater earned her a spot into Round 3 to represent for their hometown support groups.

Event organizers will convene tomorrow morning and make a 7:30 a.m. EST call for a possible 8:00 a.m. EST start to finish Round 2 of the women before moving into men's Round 1 action.