The Florida Pro Men and Women's Qualifying Series (QS) titles remain safe in Florida for another year after Caroline Marks and Noah Schweizer took home commanding wins over heavily stacked finals day fields. Marks, Melbourne Beach born-and-raised is off and running in 2019 with 3,000 points to her name along with 1,500 points for New Smyrna Beach's Schweizer to claim his maiden QS victory. Most of the day's affairs took place at the iconic First Peak wedge of Sebastian Inlet and provided moments of pure brilliance. The stars aligned for Marks once again with another dominant performance that culminated in back-to-back Florida Pro victories. The 16-year-old phenom took over the Final against 2018 World Junior Champion Kirra Pinkerton with brilliant wave choice in the wave-starved heat and still managed to post an excellent 8.83 (out of a possible 10) -- the women's top single-wave score. Marks had her eyes on the win all week and made that a reality to continue her reign over the QS rankings. "It's pretty crazy having the whole town rooting for you and they're so supportive that they would've been there for me win or lose," Marks said. "I've just been so happy and confident all week that it just felt right. I'm just stoked I got to surf First Peak, it's one of the best waves there is so that was a great feeling. Every heat I was starting with a solid wave and that put me into a good rhythm until the slow start in that Final. But, Kirra surfs so amazing she could get into a bomb and drop an 8 on me at any point." The whole town behind her along with those who matter most, brother Luke and father Darren - just a few of the Mark clan on hand. - WSL / John Ferguson

Marks began her day against one of the event threats, Australian Sophie McCulloch, and shut any hopes of an upset down right away with an excellent 8.50 to set momentum in motion. The Floridian-turned-California transplant now has three QS titles to her name after posting the event's highest heat total, a 16.10 (out of a possible 20), in her Semifinal bout as she prepares for her second year among the world's best at the Championship Tour (CT) level beginning in April.

"I think it's going to be a really fun year and wish this one was another big event, but I'm so happy they were able to bring it back for the opportunity," Marks said. "Before coming here I had a lot of fun sessions at Rincon and Ventura so I was in a really good head space. This was the same board I rode at the Surf Ranch and it's magic, I may take it to Snapper. But, it's going to be exciting year and I've been working on so many things like airs and different maneuvers." Immediately following Marks' chair-up the beach to begin the season, an all-New Smyrna Beach, Florida, Final got underway. Schweizer unleashed his aerial assault at the first peak wedge and stomped an excellent 8.50 to start. The wave consistency slowed down with the rising tide and opportunities became scarce, but the 22-year-old was able to back it up with a 6.30 to all but seal his maiden QS win over defending champion Evan Geiselman.

"If I was ever going to win a contest this is how I would have wanted to win my first, right at home," Schweizer said. "I don't even know what to feel, it's just amazing. That was the longest ten minutes ever at the end because Evan can get an eight at any moment, he's gotten one in almost every heat, but the tide just got on it too much.To see everyone here that I looked up to growing up and taking it out in front of them is pretty nice." Schweizer's air-game was par-none on finals day and had a field day on the iconic First Peak. - WSL / John Ferguson

Schweizer faced off against fellow New Smyrna Beach native Daniel Glenn in his Quarterfinal, but brought the fireworks to a much-anticipated Semifinal against an in-form Michael Dunphy. The 22-year-old posted back-to-back, near-perfect scores with two of the event's most spectacular air-rotations to garner a 19.30 heat total.

"I knew I was going to have hard heats all day and just knew I'd have to do my thing which is big airs," Schweizer added. "It helps just surfing here since the NSSA days and I love this wave, it's so fun. I just did this one since it was close to home and see how I go. Now that I've done well and got some money I might try to do some more competitions if I can get into them -- whatever I can get into I'll do." 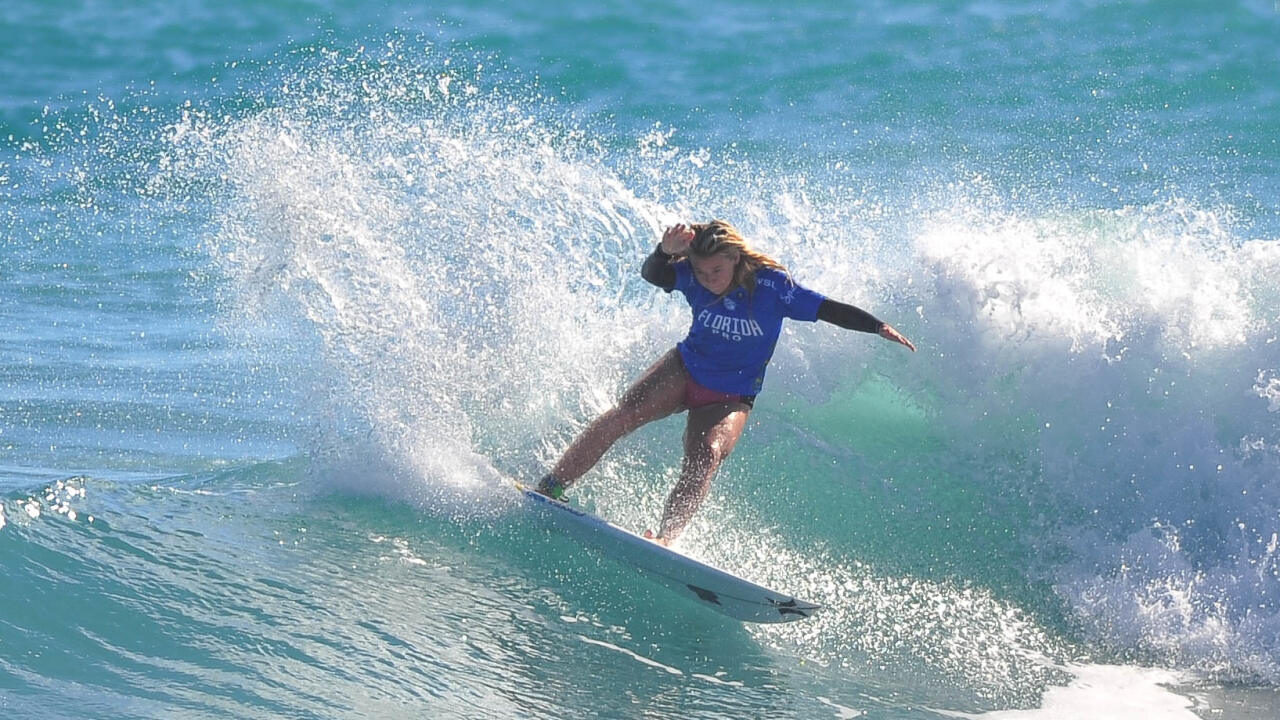 It's only just begun for Pinkerton and moves on with knowledge gained. - WSL / John Ferguson

Reigning World Junior Champion Kirra Pinkerton starts her 2019 QS campaign off in great fashion with a runner-up and 2,250 points after taking down Summer Macedo during their anticipated Semifinal bout. The tricky lineup of Sebastian Inlet's first peak took the 16-year-old out of her game plan and couldn't find the waves she needed after a brilliant run through the week. But, Pinkerton still was able to cross off one of her key goals along the way and has many more in mind to get done this season.

"Coming into this event I didn't know how it was going to go with Florida being so unpredictable and getting those points is such a good way to start," Pinkerton said. "That's one of the higher results, points-wise I've had even after winning Pismo last year. Even against Caroline I knew I had a chance to win after Worlds gave me so much confidence and I wasn't almost carefree here. Before the event I said I really wanted a heat with Caroline and the only way I could've was a Final so I'm stoked to get that heat. I want to prepare for the big events now and see myself in the Top 6 by the end of this season - one of my goals is to get a win in a QS 6,000 so we'll see how it goes."

The King Dethroned, But Eyes On The Horizon Geiselman started his day with a nail-biter against upcoming talent John Mel that went down to the final minutes. But, Geiselman wasn't leaving his Semifinal to chance and came out of the gates firing with a 16.23 heat total to start over fellow Floridian threat Chauncey Robinson. The inconsistent Final didn't give Geiselman the opportunities he needed to keep his Florida Pro crown, but gladly handed the title down to long-time friend Schweizer.

"Noah kept it New Smyrna and I'm so happy for him to win it, someone needs to sponsor this kid," Geiselman said. "He's one of my best friends for a long time and couldn't be more excited to see him get it. I was really happy with how I surfed this event and I just wished the waves stayed a little more consistent. First Peak is a quick, one section kind of wave when it's like this which made it hard on my backhand. There wasn't much more I could've done and I feel like my surfing came a long way last year so I'll just look to continue that, keep making heats, and put myself in a great position before the end of the year."