The World Surf League (WSL) is pleased to announce the return of the Rip Curl Pro Argentina to Mar del Plata. During Easter Weekend, the Men's QS 1500 and Women's QS 1000 will bring together some of the best regional athletes in South America to Playa Grande. Being the only Qualifying Series (QS) event held in Argentina, the Rip Curl Pro is a magnet for up-and-coming surfers looking to make a name for themselves during the 2019 season. 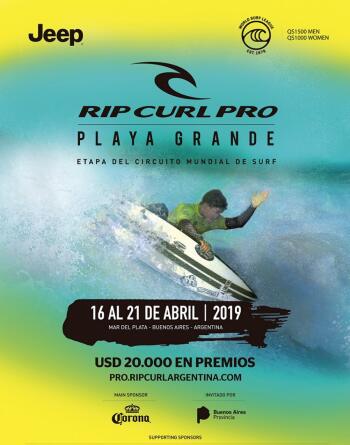 Hungry for her third consecutive victory in Mar del Plata is the two-time WSL South America Champion, Dominic Barona (ECU). The Ecuadorian was unstoppable in the past two editions of the Rip Curl Pro Argentina and looks forward to delivering another memorable performance.

The crowd at Playa Grande is always supportive of their local hero, Leandro Usuna (ARG), who earned his maiden WSL South America Champion title in 2016 and is a leading candidate to take out the event in his hometown.

Sebastian Loustau, President of the Biologia Surf Club commented on the seventh edition of the Rip Curl Pro Argentina.

"We've been working hard to put together another fantastic event here in Mar del Plata," said Loustau. "The talent-level of the athletes that have entered the event has us stoked and we're hoping the forecast blesses us with amazing waves during the Easter Holiday. It would make it extra special if one of our local athletes could reach the winner's podium this year," concluded Loustau.

The main site for the event will be along the jetty-lined coast of Mar del Plata at the break known as Biologia on Playa Grande. However, if an epic swell should roll through, the backup site at El Yacht can come into play which provides a hi-performance righthander down the extensive pier. Wesley Santos (BRA) is back to defend his event victory in 2018 as is Thiago Camarão (BRA), who won the event in 2017. Camarão, who also became WSL South America Champion in 2017, is always a threat to win an event with his mix of powerful and progressive surfing. Representatives from 12 countries will be looking to add QS points to their rankings including athletes from Peru, Chile, Mexico, Costa Rica, Brazil and Argentina.