Despite the onshore breeze, the waves at Pollock Beach were surprisingly contestable, bowling on the inside with the spring high tide. The junior surfers were unbridled out there throughout the day, going for big moves, airs and combos.

In the Women's JQS first semifinal, it was a close tussle at first between Rachel Presti from Germany and Ceara Knight from South Africa, with both surfers showing power and commitment, until Shino Matsuda from Japan picked up a last-minute counter to sneak ahead of Knight, eliminating her and S'Nenhlanhla Makhubu from the event. Rachel Presti surfed an excellent heat to advance through to the final of the Volkswagen SA Open of Surfing pres. by Hurley. - WSL / Thurtell

The second semifinal was a low scoring affair, with challenging conditions and not many running waves. Kayla Nogueira racked up the most points to win the heat from Australian powerhouse surfer Piper Harrison. Much-vaunted Japanese surfer Julie Nishimoto was eliminated along with Zoë Steyn in a surprising turn of events.

The light onshore actually helped the surfers in many respects in the Men's JQS semifinals, with the surfers taking to the air many times, impressing the judges with their high performance antics. In the first semifinal Lenni Jensen continued his winning ways, beating Luke Slijpen into second. Slijpen did well, progressing even with an interference call, and Tide-Lee Ireland and Bryce Du Preez were eliminated from the event.

In the second semifinal Eli Beukes and Luke Thompson were in control from the start, with Brad Scott and Mitch Du Preez being eliminated in the process. 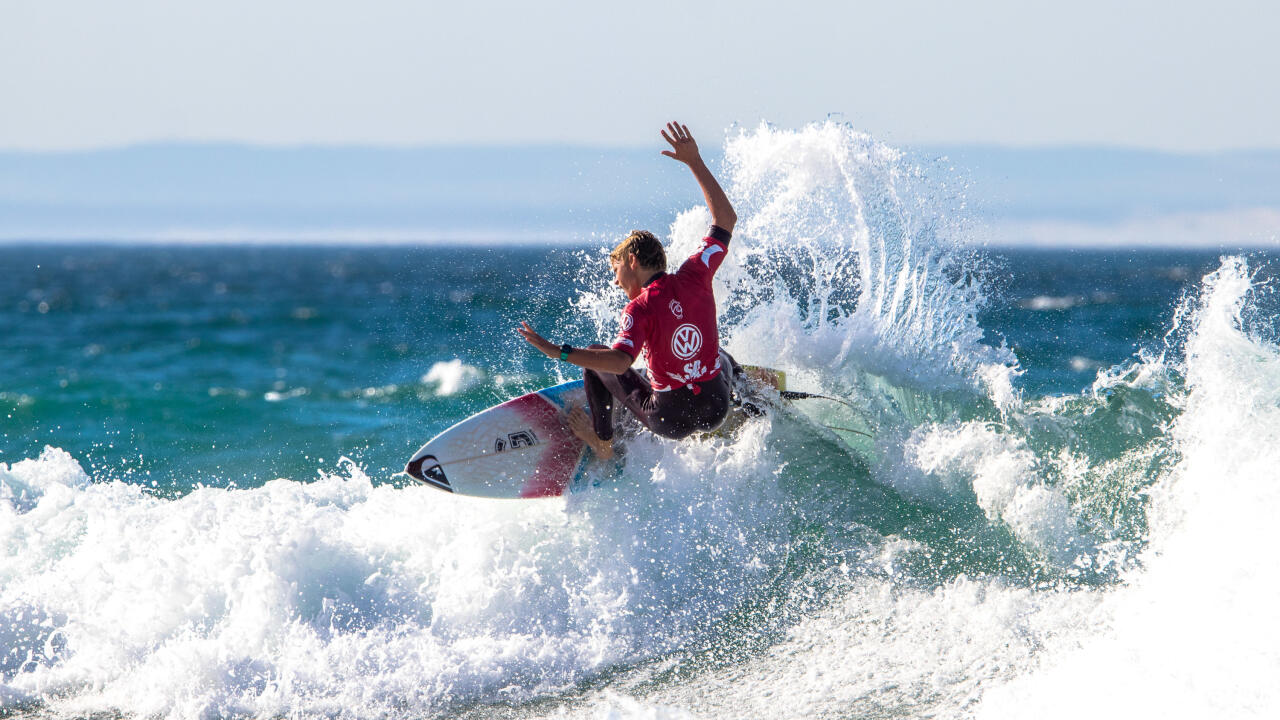 Luke Thompson had a great event at the Volkswagen SA Open of Surfing pres. by Hurley, and his potential for the future is clear. - WSL / Thurtell

The JQS Women's final was a nail-biter. Rachel Presti from Germany looked like a winner from the outset, and sat comfortably out front for most of the heat. Powerful natural-footer Piper Harrison from Australia was also in the game, as was Shino Matsuda from Japan, with Kayla Nogueira from South Africa trailing. Towards the end of the heat Harrison picked up the best wave of the final to lock in a score of 7.17, the highest score of the final, and despite a last minute flurry of waves from all of the competitors, remained there until the final siren for the win, with Matsudo in second. Piper Harrison picked up the one bomb that came through during the final, and executed four powerful moves to slip into the lead and stay there until the final siren. - WSL / Thurtell

Eli Beukes looked focused and determined from the outset of the the JQS Men's final, going to the air and looking for innovation in his repertoire. After banking a 7.67 he picked up a second runner and went to town on his backhand with a couple of big turns and combinations for a 5.5 and a clear lead. He followed it up with a 6.83 and there was nothing in it for the rest of the three surfers. Luke Slijpen came back strong, but young Luke Thompson picked up a great insider and executed a series of backhand snaps to slip into second, with Slijpen in third and German surfer Lenni Jensenin fourth.

"I'm really happy," said a stoked Beukes. "It has been such a fun trip and I'm just super happy to come away with the win. I've been working really hard and it finally paid off." In a massive upset in the Women's QS 3000 event all the Japanese surfers were eliminated from the event. Team Japan has been a force to be reckoned with this year on the City Surf Series and on the World Surf League Africa Qualifying Series. They were edged out of the competition by Australians Isabella Nichols, Holly Wawn and Sophie McCulloch.

Current world junior champion American Kirra Pinkerton managed to hold on to a second place in her heat behind Vahine Fierro from France, eliminating Japanese duo Emily Nishimoto and the talented Minami Nonaka in the process.

In a stacked all-South African heat in the Mens QS 1000, Dylan Lightfoot continued his winning ways to take the heat for a two-wave total of 12.50 with Jake Elkington in second, with Koby Oberholzer and Matthew McGillivray finding themselves out of the game.

The finals are scheduled to start mid-morning on Monday, 17 June 2019.

Surfers up the ante at Pollock Beach.