Day 4 Post Show: Momentum in Surf City
15:25
Women's Round 2 action wraps with big names in the mix, and Juniors gear up for the Semifinal's at the Vans US Open.

The men and women Pro Junior contingent returned to Huntington Beach arena to vie for finals day spots in their respective Vans US Open of Surfing presented by Swatch events. Both fields are down to their Semifinalists after heated battles and impressive showings from the women who made their US Open debut.

A few shakeups await the men's regional rankings following a few key eliminations, but the top-tier women continued to showcase their dominance over fellow contingent as they try to bring the event title back to home soil. In a flurry of last-minute action on the men's side of things, Jett Schilling and Taj Lindblad made it through the first Quarterfinal and took out event favorite Crosby Colapintoalong the way. While Schilling was safe in first with a strong 12.23 points lead, Lindblad surfed for his life on his final wave in the final seconds of the heat and earned the score he needed to move into second advancing position, also knocking out Alan Cleland.

"It's super special, to have a heat with all my friends at the US Open and make it is amazing, I'm stoked," said Schilling. "I just was on the right waves and made it through and was patient. It's super hard to stay patient when other people already caught a wave, but lucky I got two waves. Great experience, I'm stoked. Lucky I got a wildcard into the QS as well and had some experience, it was fun. Kade Matson found his first WSL victory earlier this year and is en route to a second. - WSL / Jenny Herron

Current North America No. 1 Kade Matson scored the highest wave of Quarterfinal 4 for beautiful on-rail surfing despite rehabilitating a torn foot ligament. His 8.67 featured explosive maneuvers on a peaky right-handed wave that came right to him away from the pack. Matson's third-place finish last year was enough to help push him toward his first World Junior Championships appearance and is well on track to finding a spot there once more if he can keep the momentum going in Huntington Beach.

"I had a blast and it was pretty trippy because I didn't have priority almost the entire heat," Matson said. "A week before this event I wasn't even sure I was going to compete after tearing that ligament in my foot but today I woke up and it felt amazing. I'm super fortunate to be able to surf in this one and hopefully I can make it to another Final." Fellow No. 1 Caitlin Simmers also made her move to begin her first-ever Vans US Open event as she looks to keep her momentum alive heading into the back-half of 2019.

Other notable wins included Australian Caleb Tancred and Japenese contender Joh Azuchi as they look to spoil another year for the Americans by keeping the US Open title abroad.

Surfing both the Women's QS and Pro Junior events at the Vans US Open, Alyssa Spencerearned Round 1 and Quarterfinal success today with heat wins in the Pro Junior division. Earning the highest heat total of the competition, Spencer's 16.00 was a notch above the rest as she used her dominant backhand to stomp out a two-turn combination for an excellent 8.67.

"It ended up being really fun out there actually even being a little slow but with the tide coming in which helped the sets pick up," Spencer said. "I've been looking for those pier bowl rights and I knew if I got a hold of one I could get a couple turns off. It's been absolutely amazing working with Brett (Simpson) and I'm so grateful to have him in my corner. Hopefully we can do this together." 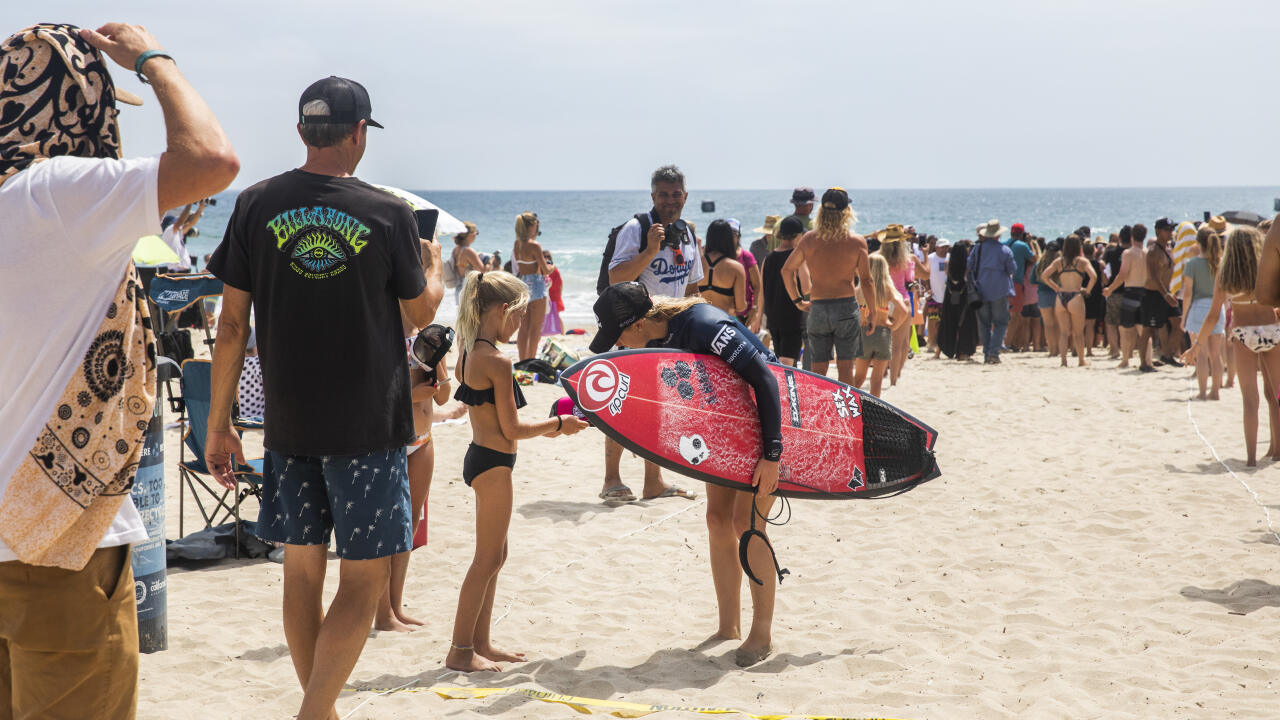 Spencer is already living full circle as she now signs the autographs to help inspire the next generation. - WSL / Jenny Herron

Reigning World Junior Champion Kirra Pinkerton opened up the Women's Pro Junior Round 1 with an excellent 8.00 and carried that fire into her Quarterfinals with the day's best single-wave score of an 8.83 to keep her momentum alive in both the Pro Junior and QS 10,000. Currently No. 3 on the Women's QS, Pinkerton is still maintaining focus on the Pro Juniors as she hopes to defend her World Title, but has the majority of her attention toward the QS.

"The QS right now for me is a little bit more important so I'm really focused on those," said Pinkerton. "Just focusing in on that, kind of have Juniors in the back of my head. Getting to surf in the Juniors is just getting more time in the water, heats, maybe as an advantage for the QS, so yeah, just trying to surf and find out what's best. I think any event win at the Vans US Open is special and a lot of the girls from Worlds are here so it's almost like World Juniors 2.0 (laughs). But winning the Pro Junior would give me a ton of confidence toward the 10,000." The runner-up to the World Junior Championships is into the Semifinals for a chance at getting an edge on Pinkerton at home. - WSL / Jenny Herron

Another notable Round 1 opener was World Junior runner-up Keala Tomoda-Bannert with a 14.97 heat total to overtake Peruvian surfer Sol Aguirre. Tomoda-Bannert also charged her Quarterfinal heat as waves seemed to come right to her throughout the 20-minute heat. The fight for second place continued on the sand as the remaining three girls waited for scores as Samantha Sibley ended with a berth into the Semifinals.

"I'm just happy to be in the contest. There's waves, our heat was kind of slow but I managed to get through them. It was hard to get away from the reef breaks (on Kauai) and go surf sandbars like this."

Bree Smith made an impression to wrap up Round 1 with a win over Sibley and pushed that performance into solidifying a Semifinal spot.Smith, along with Simmers, join fellow Vans US Open rookie Sawyer Lindblad after watching her brother clinch the same spot just hours prior.

The Pro Juniors will return to the water Saturday, July 5, to crown their event victors.

The San Clemente, California, native brings the title home for the first time since 2015 over a stacked Final heat.

Women's Round 2 action wraps with big names in the mix, and Juniors gear up for the Semifinal's at the Vans US Open.

Some of the world's best begin to gather at Huntington Beach, California, in preparation for the next major Qualifying Series event.