A place at the top of the North America Qualifying Series (QS) rankings has its stage set at the Thomo QS 1,000 in Memory of Bill Thomson beginning November 7 -10 at the world-renowned Soup Bowl, Bathsheba, Barbados. Coinciding for a third-straight year with the Live Like Zander Junior Pro, the Thomo QS 1,000 honors the "Father of Barbados Competitive Surfing." Thomson helped pave the way for competitive surfing on the island and the event that now pays homage to him provides the men's QS contingent a shot at valuable points to end their respective campaigns.

Honoring Bill "Thomo" Thomson
3:27
Known as the "Father of Barbados Competitive Surfing," Bill Thomson helped pave the way for the likes of Alan Burke and beyond of making professional surfing a career path on the island.

Ann Thomson, widow to Thomo, continues to come down each year and watch the competition along with many of the Thomson family and the Bill Thomson Charity.

"(Bill's) impact is tremendous and humbling," said Ann. "He worked tirelessly in the Barbados Surfing Association (BSA) growing competitive surfing, traveling with national teams and the youth to advance the sport here in Barbados. It is truly fitting that we have a 'surftastic' WSL event in his honor which also helps our family to keep his memory alive." 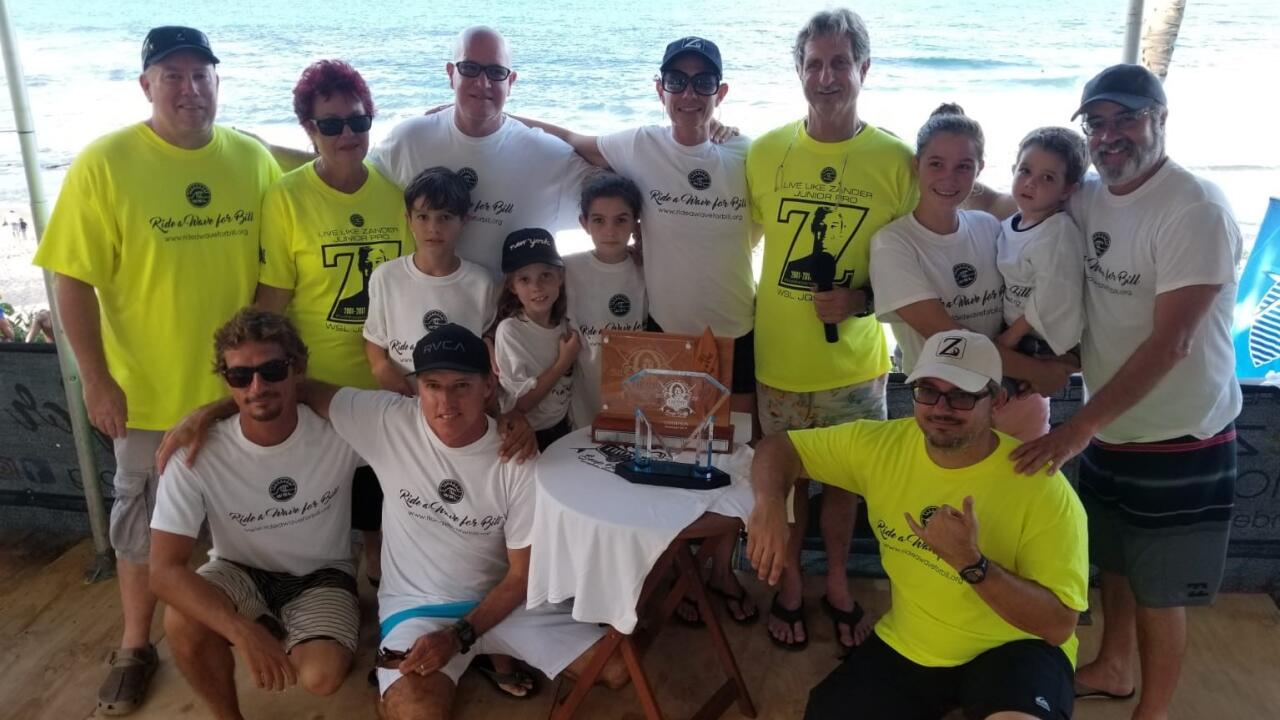 Members of the Bill Thomson Charity along with family and friends. - WSL

Sam Mahon, cousin to Ann and Executive Trustee of the charity, has learned more about Thomo in the past three years then his lifetime and is now recognizing that legacy.

"We saw lot of Bill at family gatherings but I did not realize the impact he had on the youth he taught and mentored," said Mahon. "I always admired him for his commitment to the BSA and to his kids. Bill and Annie also developed the surfing industry by making it a popular sport for all the kids through their surf shop 'Lazy Days and Island Waves.' I now realize how much he was the father of competitive surfing in Barbados in more ways than one."

Current No. 1 Noah Schweizer is on pace to take down his first-ever Regional QS Title after a stunning season that includes two victories - his maiden win coming in Florida to start the year. The 24-year-old only has to deal with recent Oaxaca Pro QS 1,000 winner John Mel, also his maiden QS victory, as only 100 point separate the pair after dropping their lowest result. Both have solidified their place in the Top 2 with the opportunity to contest in the highest-rated events for the first half of 2020 and now comes down to who can take the No. 1 finish.

"I love coming back to Soup Bowl," said Schweizer. "It's such a good wave and I feel like it really suits my surfing and its epic that the last event of the season is here. My mindset is pretty similar to how I feel being at the other East Coast events. I've been here quite a few times and and feel pretty comfortable but I'm just here to surf my best every heat. I'm here with my older brother, surfing every day and just stoked to be back here."

Taste of Soup Bowl
0:44
Jordan Heaselgrave, Jacob and Josh Burke all enjoying a bit of home before the Thomo QS 1,000 In Memory of Bill Thomson.

But, the two will have to fend off a hefty field if they're to increase their lowest result including the island's, and QS, standout Josh Burke along with former event winners Chauncey Robinson and Che Allan among many more searching for their first QS victory at the iconic break.

"Im always so grateful to return back to Barbados," Robinson said. "Soup Bowl is easily one of the top 5 best waves on the QS, and we're so fortunate to have it on the schedule again this year. Winning last year was absolutely amazing and to defend that win would be awesome. I'm really just looking forward to sharing waves with everyone on the island that has become family to me over the years."

Tune in LIVE at www.WorldSurfLeague.com for all the action unfolding throughout the event.