The World Surf League (WSL) Ron Jon Quiksilver Pro QS 1,500, Junior Pro and Roxy Junior Pro crowned Kei Kobayashi, Caitlin Simmers and Jabe Swierkocki its respective winners on the shores of Cocoa Beach in two foot, occasional three, swell that each of the competitors thrived in throughout finals day. This marked a big day for all three competitors as Kobayashi became the first to win the QS and Junior event, Simmers claimed back-to-back wins of the event and Swierkocki's brilliant run ended in his first-ever WSL victory.

A long-awaited QS victory became a reality for the 21-year-old Kobayashi after finishing runner-up in 2017, also his last Finals appearance. The San Clemente, California, competitor went on a tear through the event and found another gear on finals day, matching the event's best heat total of a 17.33 (out of a possible 20) in his Quarterfinal battle with Keanu Kamiyama before overcoming adversity in the Semifinals against Brasilian standout Edgard Groggia. But, a treat awaited for Kobayashi in the Final against fellow San Clemente competitor Taj Lindblad, marking his first QS Final appearance, as the two traded waves until the final horn. (Full interview in video above)

"I'm super stoked on that win and can't thank my brother's girlfriend's family and my friends enough for all the support this week," said Kobayashi during the awards. "I want to thank WSL and the event organizers here for letting us finish this event with everything going on. I hope everyone stays safe out there. To have a Final with Taj (Lindblad) was awesome being able to make it an all-San Clemente finish after we talked about it earlier this morning and can't believe it happened. I'm at a loss for words." Simmers continues a tear through WSL events and is back at No. 1 to start 2020. - WSL / John Ferguson

Simmers took over the Final with an impeccable 15.83 heat total halfway through the battle with 2019 North America Pro Junior No. 2 Sawyer Lindblad alongside fellow Californian Bella Kenworthy and Floridian Zoe Benedetto. Each of the competitors were in a combination situation after Simmers dropped her 7.00, meaning each of the surfers needed two new scores to equal Simmers, and all but sealed her back-to-back victory.

The Oceanside, California, competitor saved her best for last with an event-best single-wave score of 8.83 in the Final to seal her event title defense. Simmers, 14, now picks up right where she left off in 2019 as No. 1 among the North America Pro Junior ranks with hopes of returning to WSL Junior Championships.

"It's pretty sick to go back-to-back and I really want to get back to Worlds this year because Taiwan was such a good wave," said Simmers. "The waves got a little smaller today but I just did the same thing in my both my heats and found those double-up lefts that let me get a couple more turns on. It's cool to start at No. 1 again and it feels like a long time since my last win so this is pretty sick." Swierkocki getting his first-ever WSL chair-up the beach and into North America No. 1. - WSL / John Ferguson

A battle that came down to the wire unfolded in the Ron Jon Quiksilver Junior Pro featuring Swierkocki taking on some of the event's standout performers, fellow Californian, Levi Slawson with Floridians Blake Speir and Cocoa Beach's own William Hedleston. While Speir and Swierkocki got off to a solid start, it was Slawson who earned an excellent 8.33 to close the gap quickly before taking the lead heading into final minutes.

But the day belonged to Ventura, California's, Swierkocki who found himself on a righthand runner to earn a 6.93 under the five-minute mark and take out his first-ever WSL win. The 17-year-old made big run in both events, making it to the Quarterfinals today as well in the QS 1,500, and starts 2020 off on a high note heading into a break from competitions.

"I'm so psyched to win here after surfing against those guys, they're some of the best there are here in the country so it's incredible," said Swierkocki. "The waves got a little more grindy today but it's good to know I can still get it done and to get one on Levi (Slawson) is a good feeling just surfing against him a lot and knowing what he's capable of. I'm stoked it played out to where we went 1-2 and also just to finish the event was super fortunate. This is a dream start to the year after the QS events and now to start strong in the juniors, I'm just really excited to carry the momentum and see what happens next." The elder Lindblad cracked the code and made his first QS Final appearance. - WSL / John Ferguson

Lindblad now adds 750 points to his 2020 campaign after an impressive showing to star the year and now heads into the break with that same momentum. The 17-year-old had to overcome event standout, and former event winner, Josh Burke in a stout Semifinal affair that Lindblad was able to control from the start and not allow the Barbadian to get back in the heat. Lindblad still maintains a focus on the Pro Junior events but now has a solid QS foundation in place to build confidence.

"I'm so excited to make it to the Final and to surf against Kei (Kobayashi) was awesome," Lindblad said. "Surfing against guys like Kei and Josh, they're just insane and it's helped me learn a lot. It was nice to focus on one event and not two after losing in the juniors even though I wish I could've done better but it feels good to be building a house of results on the QS and hopefully I can bring that into the juniors this year." Taj's younger sister, Sawyer, joins Simmers with starting off 2020 as she finished in 2019 as they continue their dominance over the North America region alongside Slawson and Speir - who both now sit in WSL Junior Championship qualification spots. 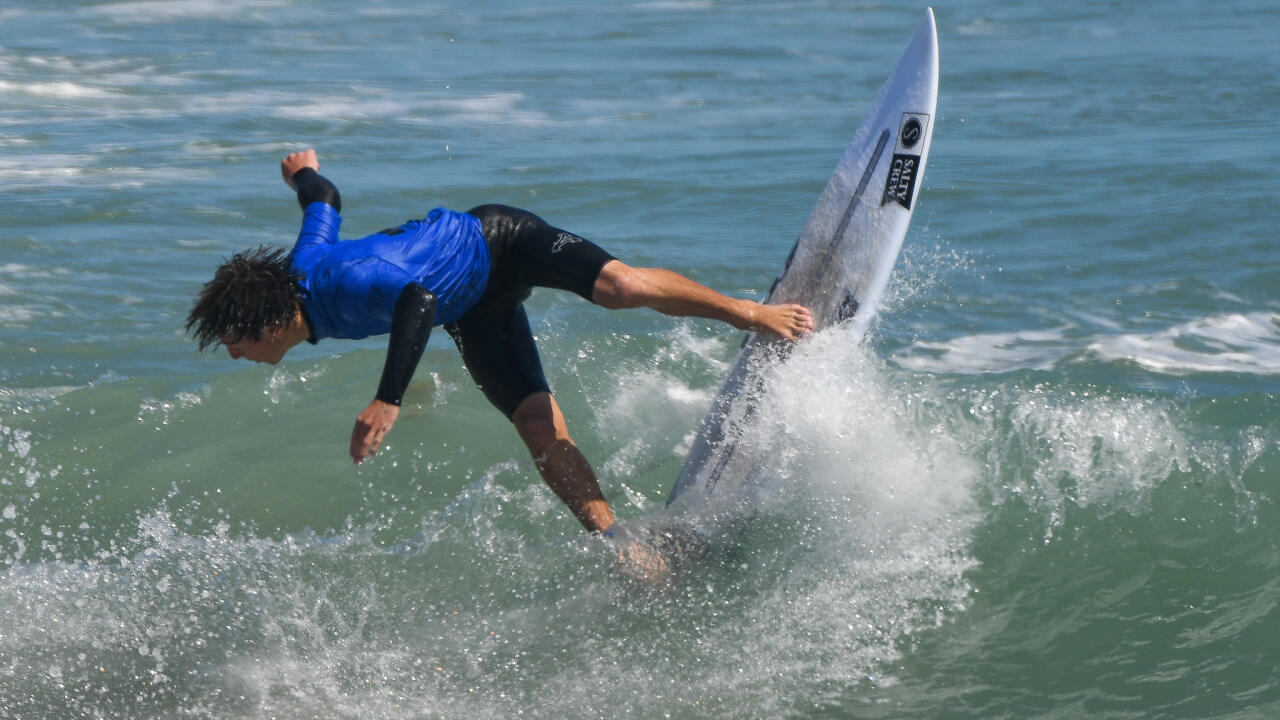 The previously scheduled Barbados Surf Pro QS 3,000 set to run March 17 - 22 and Jack's Surfboards Pro QS 1,500 prepared for March 26 - 29 have been postponed. Please see more above on the full update from WSL.