It's five in the morning in Nazaré, Portugal. A heavy chill hangs in the November air. Out in the darkness, sixty-foot waves slam into the headland, flinging spray hundreds of feet into the air. The sound pounds like a thundercloud, as much felt as heard.

In Nazaré harbor, Justine Dupont stands in the parking lot. She is the first one there, just as she is every morning. Dupont meticulously checks her board and prepares her jetski. Brazilian Lucas "Chumbo" Chianca, who surfs often with Dupont, says he has yet to beat her to the lineup. Even when he makes it to the harbor ahead of her, Dupont is always ready first.

Known as much for her bright smile as for her intensity, Dupont, 28, is one of the world's best big wave surfers. When asked how to pronounce her name, she laughs. "It's Justine with an "e", not like Justin Beiber," she says. Dupont wants to ride the biggest waves, sure. But more than that, she wants to surf the best line, and do it with style. 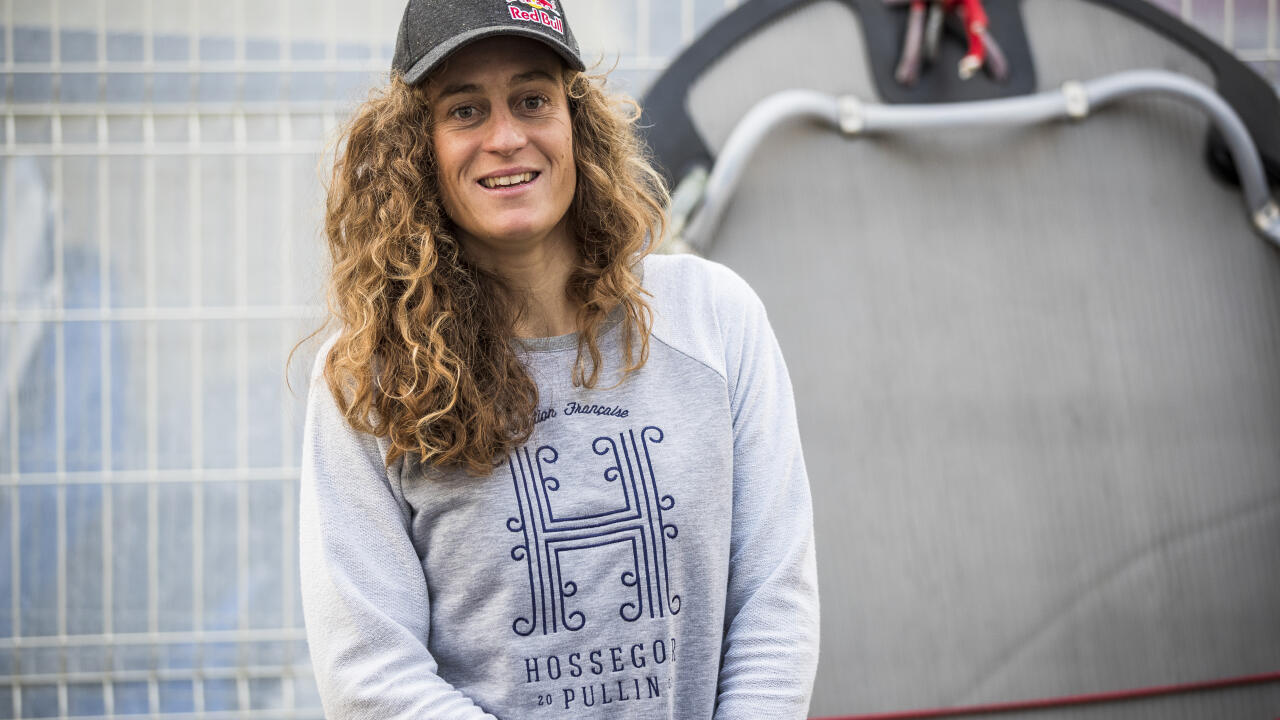 Justine Dupont in Nazare, Portugal February 2020 for the Surfer's Meeting in the harbour of Nazare. - WSL / Damien Poullenot

"We don't think about the size of the wave. ‘Oh, this wave is giant, can kill me! I just want to survive,'" says Chianca. "We're looking at the wave, and it's like, ‘I don't care about the size, let's do a turn right here, waaaaaa!' We're doing performance moves on the wave." Chianca finger-surfs as he talks.

An athlete from an early age, Dupont learned to surf from her father. She grew up in Bordeaux, and her family regularly made the 30-minute drive to the beach at Lacanau. Surfing felt like freedom to Dupont, who often stayed in the water all day. Though she competed in swimming and sailing, Dupont did not initially want to do surf contests.

When she finally did a local contest in Lacanau at age 14, she won. From there, success came quickly. The following year, she won her first French longboard title, and in 2007, she finished second at the world longboard championship in Biarritz. Dupont says her first contest scared her. The waves were between three and five feet, which intimidated her. "I was like, almost crying not wanting to go back in the water," she says. Because she had won her heat, she had to paddle out for the final. She laughs as she tells the story, but the emotions she felt that day formed a deep wellspring of motivation.

"I wanted to understand why I was scared," she says. "I realized I could learn a lot and I was really interested in how I could push this boundary. All of the sudden, it became less an inhibition than something I wanted to look for - to push my limits and to play with the ocean."

A move to Hossegor exposed Dupont to bigger surf. As she continued to compete in both longboard and shortboard events, Dupont accumulated victories at the national and international level. Equally at home on a longboard, shortboard, stand-up paddleboard, and tow board, Dupont is uniquely versatile. 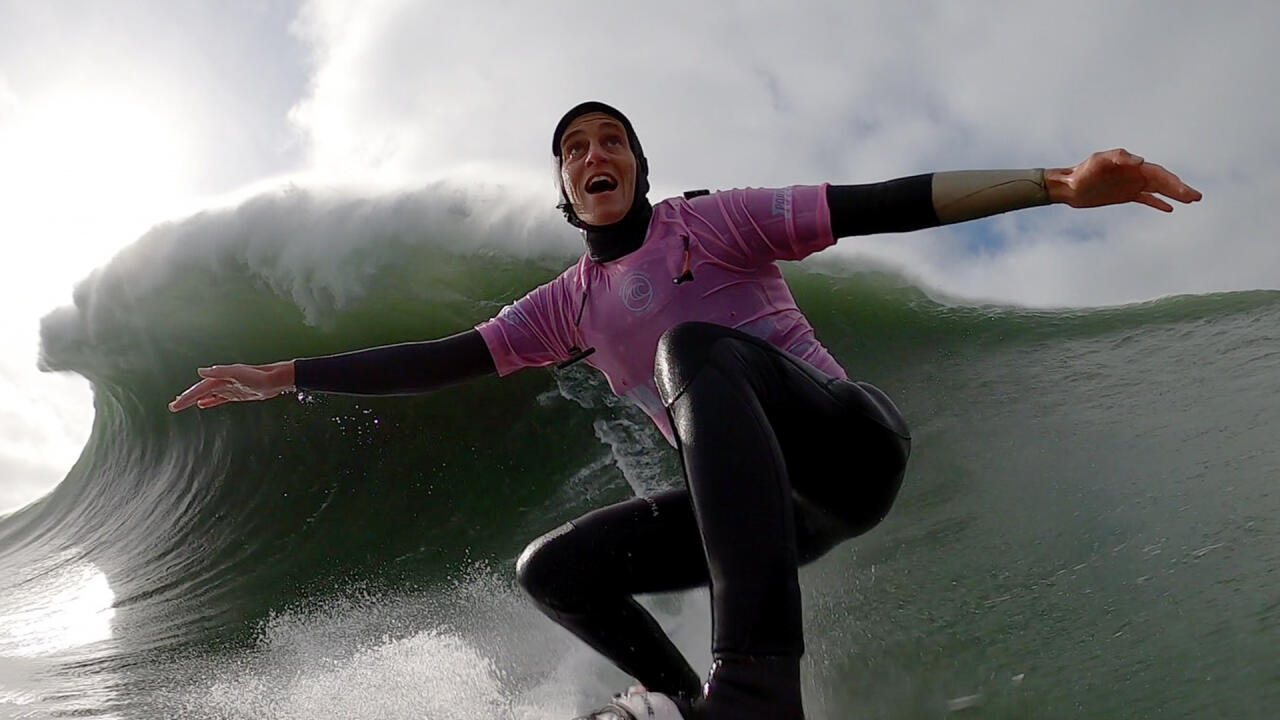 But big wave surfing is her passion. A trip to Aileens in Ireland intensified Dupont's focus. "I got a big barrel and I remember thinking, ‘this is what I want,'" she says. In 2013, Dupont became the first woman to surf Belharra in the Northern Basque Country. In 2016, Dupont finished second at the big wave world championship at Pe'ahi. She was hooked.

"The feeling you get doing it, it's just so awesome," she says. "And you feel like, there's no boundaries. The ocean, there's no limit."

In her imagination, Nazaré held an inexorable pull. "You make this name so big in your head, and you're scared of just a name," she says. As she watched video footage of the famous wave, Dupont struggled to make sense of the set-up with its towering cliffs, famous lighthouse, and mountainous surf. The thought of surfing there scared her, but she felt drawn to it.

In 2016, Dupont traveled to Nazaré with her boyfriend Fred David, a world bodysurfing champion. Dupont surfed her first paddle session at Nazaré in 15- to 20-foot waves. "I could feel a bit of that fear on the first session," she says. Dupont struggled with the thumping shorebreak on the way back to the beach. Though she had surfed bigger waves before then, the mystique of Nazaré got into her head that first day. A planned two-week visit stretched to two months as Dupont explored the wave in all its guises. Unlike many of the world's big wave spots, which break rarely, Nazaré is notable for its consistency. Each day, Dupont and David surfed the wave together. As their confidence grew and the size increased, they switched from paddling to towing.

"The shape of Nazaré, it's kind of the same when it's small, as well," says Dupont. "So you can surf it, really every day. You learn about this wave even when it's small."

Since that first visit, Dupont and David have spent each winter in Nazaré. Some days, they swim out with fins and bodysurf, which Dupont says is her favorite training for big wave sessions. For cardio, Dupont runs stairs up the cliffs. "I can't train with her, she goes too hard," says David, laughing. Along the way, Dupont has fallen in love with the town's hospitality and the raw intensity of the surf.

"You've got this big wave against the rocks and it's really raw and powerful and intense," she says. "And you feel like you are so tiny. The ocean is giant and the limit is yourself." Justine Dupont during Round One of the 2016 Women's Pe'ahi Challenge. - WSL / Kelly Cestari

On any day at Nazaré, Dupont might ride the biggest wave of her life. She will likely also take some of the world's biggest waves on the head. Dupont spent two years training to hold her breath. Twice each week, she went to a 20-meter deep swimming pool and worked to stretch the time she could stay under. Dupont can remain submerged for over four minutes.

"The most tricky part is when you see the wave, when you understand that you will have to stay under the water for a little while," she says. "The first stage, you feel a little fear, just a little, not even a second, but just enough, and straight after, you are thinking, ‘breathe, calm.'"

As she goes underwater, Dupont tries to clear her mind and breath more slowly. She wants her heart rate to be as slow as possible. "I try to really hold to my vest and position like a fetus," she says. Confidence in her training and her tow team help her stay calm as the water churns and roils around her. Mind clear, she waits. Dupont knows her team will be there to pick her up.

That confidence comes from the many hours she has spent in the water with David driving the ski and Clément Nantes on safety patrol. Sharing the experience of riding giant surf is part of the joy of it for Dupont and the team aspect of tow surfing appeals to her. Her partners provide encouragement and when necessary, a check on her ambitions.

"It's a good thing to have the team, because sometimes, you are too caught up in your emotions and you really want to push and to get another one," she says. "And the team is there, to tell you, well, maybe it's too much." Despite all her preparations, Dupont still gets scared. Some fear is a good thing, she says. "It means that you're really aware and really in the moment." Experience helps guide Dupont. She knows sometimes fear signals that that something is wrong and she needs to back off. Maybe the conditions have changed or she's tired. Dupont tries to focus on the details.

"I connect to my senses," she says. "Sometimes I put some water in my mouth, to feel the water against my skin. I look around at what is going on, what color the water is. Like this, I know that I am right here, right now, in the moment."

And then comes the day, when all the elements come together. In February at Nazaré, Dupont surfed a wave she's called the biggest of her life. Dupont's performance that day won her the wave of the day honors at the Nazaré Tow Surfing Challenge and a nomination for the 2020 Women's XXL Biggest Wave Award. She also received a nomination for the 2020 Ride of the Year Award, which is open to both men and women.

An offshore canyon gives the waves at Nazaré their distinct size and shape. As the set rolled in, Dupont saw the swell hit the canyon perfectly. As she let go of the tow rope, Dupont felt the wave grow even larger beneath her board. Then, she set out to surf it with all the skill at her command. "When she drops, she always to go to the wall, she is never looking for survival and going straight," says Chianca. "There is always some performance there - and that makes Justine a complete big wave surfer."

Watch the video footage and Dupont looks tiny as she carves down the wave's giant face. She also looks perfectly at home. Traveling at an improbable speed, she cuts a smooth arc. Behind her, the white water explodes. Dupont disappears from view, enveloped in the cascading fall of water. Still on her board, she emerges from the white fury, ecstatic.

"I was in the white water and it was crazy to be, for a second, to be fully part of the wave," she says. "It was kind of a magic thing, to share this time in the belly of the wave."

Ever restless, Dupont's ambitions elude boundaries. She loves paddling big waves as much as towing, and her previous trips to Pe'ahi have left her unsatisfied. She is determined to go back for more. Dupont also has yet to surf Teahupo'o. She mentally spins the globe. "There's so many places!"

Next winter she will start the year at home in Nazaré. When she looks at the ocean, Dupont sees wide open opportunity. There's no limits. Out there on the edge of it, that's where things get interesting. Determined and joyful, Dupont looks to the horizon. Somewhere the next big wave awaits her.