Raised at Pipe, John John Florence, has won two World Titles and a Triple Crown, not to mention qualified for the Olympics, but there's one honor that he's been unable to chase down: A Billabong Pipe Masters presented by Hydro Flask victory.

What makes this situation equal parts frustrating and confusing is that Florence is widely considered to be the most naturally-talented Pipe surfer of his generation. He's been competing at his local break for more than a decade. During that time he's finished runner-up twice. Otherwise, he's never gotten past the Quarterfinals.

To add injury to insult, John's also been unable to fully complete the last two seasons due to a knee issue. Before he withdrew in 2019, he'd won two events and come third in another -- it was looking like his World Title to lose.

But 2020 could be John John's year. With the Tour starting on the North Shore instead of ending here, the added pressure of a World Title has been lifted. He's also had a full year during the extended off-season to get an injured knee back to full strength. It's safe to say that John John Florence is back.

Before the event kicked off, we met up with him at the WSL office in Haleiwa and asked all about the extended offseason, new business venture, and his honest take of the 2021 Championship Tour format. Right before we spoke with him, we watched his session at Pipe during the first major swell of the season. He was easy to spot too, taking off on the biggest bombs aboard a pastel Pyzel.

North Shore Freesurf With John John Florence, Italo Ferreira, And More
3:37
Preview how the world's best are looking on the North Shore just before the start of the 50th Billabong Pipe Masters presented by HydroFlask.

WSL: After so much time off, how is it going to feel to finally put the jersey back on?
John John Florence: This is the most energetic I've felt about surfing coming into a winter in a long time. It's interesting to start the year here at Pipe because usually we're starting at Snapper. For me it's like you're going away from home in this environment at Snapper, it's competitive only. So it's definitely different for me.

I haven't changed too much of my routines. I've been surfing Pipe a lot so I'm excited.

Once I get the jersey on and think, okay, I'm in a heat, this is happening. That's how it was last year. It didn't seem real because I took most of the year off because of my knee. It's crazy, once I was in the jersey, the competitive thing just clicks and I think, okay I need to win.

Tell me about that sesh this morning?
Yeah this morning we had some really fun waves. I woke up early and saw there were only 4 guys out. I tried to rush down there then there were 30 guys out. It was a lot of fun, I'm stoked some swell started because the swells haven't been a good direction for Pipe. This is a totally different season, we're starting at Pipe and we've got a couple new venues on Tour with Sunset and Santa Cruz, what are you looking forward to in 2021?
I love the idea of the five-man final showdown at Lowers, I think it's great. We're all going to know that the World Title is going to be won on that day. They're going to be able to pick the days out of the swell and be able to figure out exactly what day is the best day and run that full day and score waves for it.

Santa Cruz used to be on Tour and I got to surf the Tour event there. That's a tricky wave but it's an amazing wave for competition because it is tricky and you have to get to know the lineup. All the little boils and steps and sections. It's going to be cold too [laughs]. Getting used to booties is an uphill battle for me.

Is This The Year John John Florence Finally Wins The Pipe Masters?
1:21
Born and raised at Pipeline, Florence's local knowledge is unparalleled on Tour, making him one of the most dreaded heat draws but so far victory has eluded him.

Can you tell me more about Florence Marine X?
I got to start a new brand with Bob Hurley and the family. The brand for me is a built around making good outdoor clothes for our environment. I feel like if you can get inspired to go outside and enjoy sailing or being in the ocean, you're going to want to help keep it beautiful. For me that's been my thing, to inspire people to get out there and inspire people to get off and adventure in the ocean. 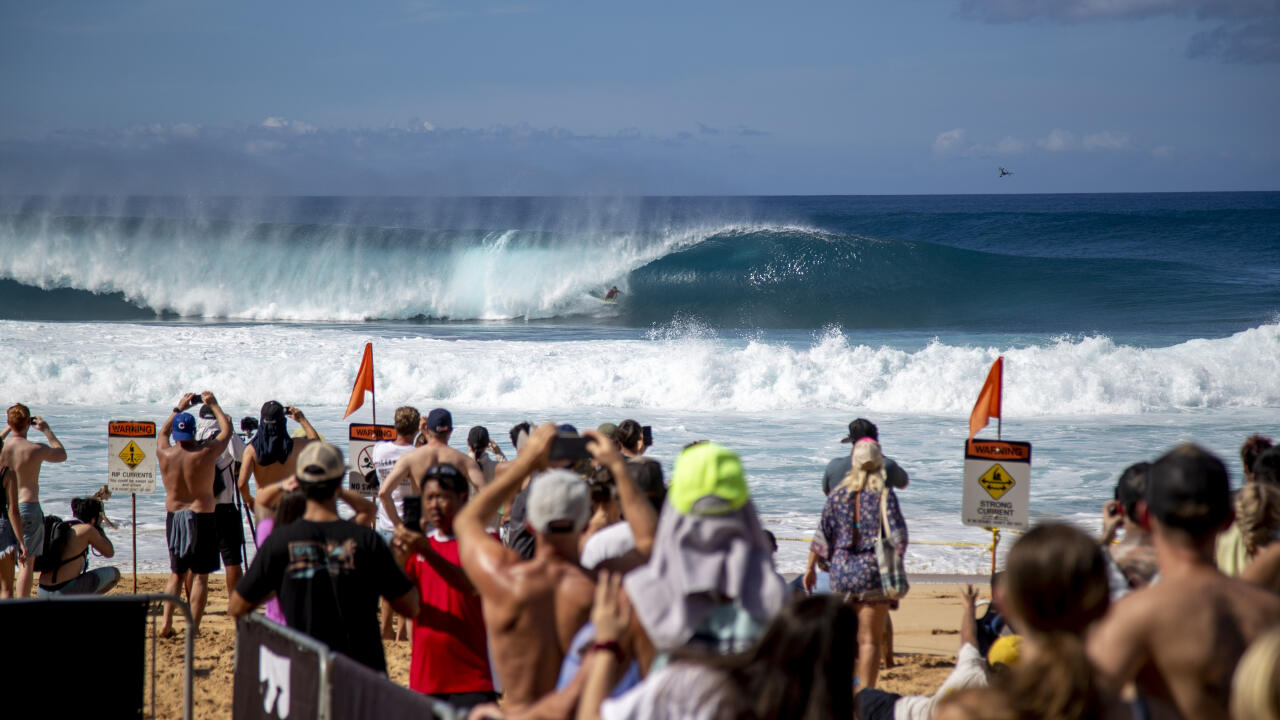 The beach holds their breath when John John Florence dissapears in these types of barrels. - WSL / Tony Heff

It's the 50th running of the Pipe Masters this year, what does that mean to you as a Hawaiian?
The Pipe Masters for me is the biggest event on Tour, it's the event that I look forward to every year. It's the event I'd love to win one day in my career.

I've grown up watching my heroes surf this event and win the world titles out there. Everyone who surfs pipe has their own little relationship with that wave and so to be able to win a competition out there is a big feat. For me it's one of my biggest goals.

It's been a tough year for a lot of people. What are some of the positive changes that took place in your life during the year off Tour?
Having a year off was unfortunate for a lot of people around the world. Here I just got to spend time at home which was pretty amazing.I haven't done that since I was a little kid.

I got to spend time starting a new brand so that was really fun. Just having the time to do all of these things and get my knee back in order. It's been a blessing for me. I was rushing to get my knee back for Snapper. Now having a whole year I'm back to 100% not even thinking about it. I'm really happy to not be thinking about my knee anymore.

We [also] have a piece of land so growing food is pretty fun for us. Just learning about all the different things that go with that, so we spent a lot of time doing that this year.

I got to spend some time sailing too, I did a really fun trip with Kai Lenny where we got to sail from here to Kauai on this little foiling boat I have. It's a long time on a tiny boat but it was a lot of fun. A lot of learning too.