When we think of Australians who made history in 1915, the rugged Anzac is the figure who first springs to mind. A century after the Gallipoli campaign, that year has become near-synonymous with the mythologized soldiers who fought and died in the Dardanelles.

But months before Australia's so-called "baptism by fire" began at Anzac Cove, a more joyful baptism drew crowds to Sydney's northern beaches. There, in January 1915, local 15-year-old Isabel Letham was inducted into the mysteries of surfing, becoming one of the first Australians to ride the waves.

This was the early days of Australia's beach culture, as public bathing had only been legalized a few years before. Surfboards were almost unknown, and beachgoers instead entertained themselves with body surfing-then known as "surf shooting".

Into this scene arrived Duke Kahanamoku, an Olympic swimmer and famed surfer from Hawai'i, the home of modern surf culture. Kahanamoku had been visiting Australia to test himself against local swimming talent but was convinced to add a surfing demonstration to his itinerary. Sydney-siders were keen to see the handsome Polynesian show off the unfamiliar sport, and punters lined the sand of Freshwater beach.

Once in the waves, Kahanamoku decided to enhance the show with a tandem demonstration and invited Letham to join him on the board. They made a striking couple: Kahanamoku was tall and muscled, while Letham was lithe and vivacious, her skin bronzed from long days at the beach. The duo was a local sensation, and Letham was hailed as the "Freshwater mermaid". Thanks to the visiting Hawai'ian, both surfing and Letham were now big news. 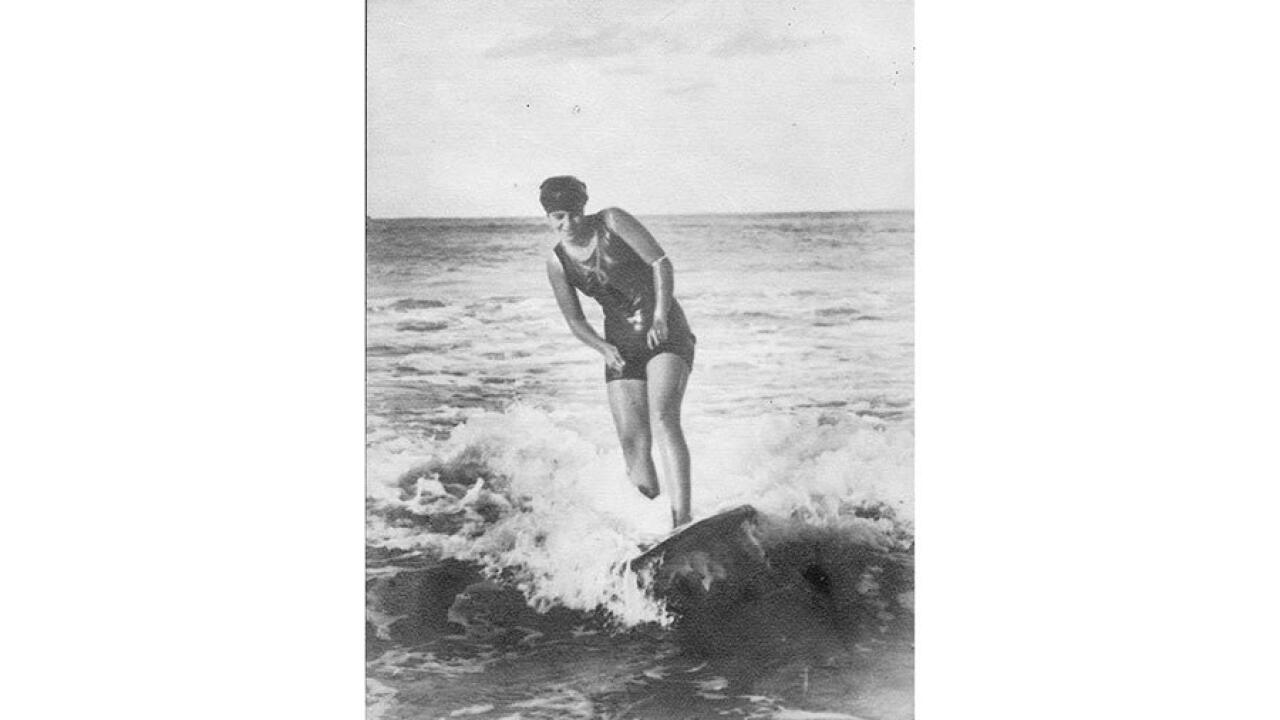 Emboldened by this Australian celebrity, Letham decided to try her luck on the silver screen. The US film industry was taking the world by storm, and Hollywood was the place to be. Leaving school at 16, Letham found employment as a sports mistress at elite girls' school Kambala, and also worked as a private swimming instructor.

By August 1918, she'd saved enough for a fare to California. The war was still raging but that was not enough to deter her. Still only in her teens, Letham set sail on the SS Niagara, the "Queen of the Pacific". She traveled alone and with only the vaguest outline of a plan.

‘A Young Diana of the Waves'

Letham had no luck in Hollywood but nonetheless reveled in the freedom of life abroad. She tackled the waves at Waikiki, partied with Russian aristocrats in New York, and lived a bachelorette lifestyle in Los Angeles, hairdressing to pay the bills. In California, she continued to turn heads with her surfing skills, known as "a young Diana of the waves".

Although she returned to Sydney in 1921 to nurse her ailing father, Letham was lured back to California soon after his death in 1923. This time, she settled in San Francisco, where she became a celebrated swimming instructor. At first, Letham worked at the University of California, Berkeley, where she developed expertise in modern approaches to swimming pedagogy, which stressed the technical mastery of each stroke.

Later she taught children at San Francisco's public baths, and in 1926 was appointed swimming instructor at the luxurious City Women's Club, an institution which boasted "the most beautiful indoor pool on the Pacific coast". Having decided that "opportunities in the States were high for women", Letham had adopted US citizenship in 1925. She was, by this point, a modern woman par excellence: economically independent, physically daring, and unapologetically ambitious.

One of her ambitions was to introduce Australian-style beach safety patrols to California, where swimmers drowned at an alarming rate. In 1925, she had reached out to the Sydney lifesaving community to get them on board.

To her dismay, this idea was scuttled when Sydney's surf clubs refused to grant Letham membership. "We do not teach ladies the work", decreed the president of the National Surf Life Saving Association. Without any formal affiliation to the lifesaving movement, Letham found it nigh impossible to carry its message overseas, and her plan to export Australian expertise and reduce Californian fatalities came to naught.

A Champion of Women In 1929, disaster struck. Letham fell down a manhole and suffered a serious back injury that required months of rehabilitation. Unable to work, she retreated to her family home in Sydney. Soon after, Wall Street crashed and her mother became seriously ill. Faced with financial strain and family responsibilities, Letham had little choice but to remain in Australia - a twist of fate she would long regret.

Back in Sydney, Letham derided the primitive state of local swimming education and began teaching at pools throughout the northern suburbs. She was also an early proponent of synchronized swimming, and in the 1950s organized a "water ballet" at the Freshwater Ladies' Swimming Club - an event inspired by the "rhythm swimming" she had observed at Berkeley several decades earlier. No longer a resident of the United States, her American citizenship was revoked in 1944.

In 1961, Isabel Letham retired as a swim coach. Over the previous three decades, she had become an icon of Sydney's northern beaches, known and beloved for introducing generations of children to the water. Still living in the family home near South Curl Curl, she swam daily in the sea.

Later in life, Letham emerged as an enthusiastic champion of women's incursion into the masculinist culture of Australian surfing.

"There's no reason why girls should not be as good on surfboards as the boys. I'm all for them," she proclaimed in 1963. In 1978, she became a life member and patron of the Australian Women Board Riders Association, and in 1993 was inducted into the Australian Surfing Hall of Fame. She was an inspiration to a later generation of female surfers.

Although it was a man who first made her famous back in 1915, Isabel remained fiercely independent and never married. She lived until the ripe old age of 95, passing away on 11 March 1995. A true water baby until the end, her ashes were scattered off Manly and Freshwater beaches.

Isabel Letham features in an episode of ABC radio's Shooting The Past program called The Glide, exploring the history of surfing in Australia.The Conversation This article is republished from The Conversation under a Creative Commons license. Read the original article.