There was much gaping-mouth action and glazed looks when the World Surf League announced the four-leg Australian tour was to drop the iconic Snapper Rocks and Bells Beach events earlier this year. In what could be described as a make-do tour for a pandemic-stricken world, suitable fill-ins were found at history-drenched locales Newcastle and Sydney's Narrabeen. Fair enough. And Margaret River was a no brainer - but when the words Rottnest Island came into view, there was almost guaranteed to be a flurry of hasty keyboard tappings.

Google: What is Strickland Bay, and is it any good?

Power Surfing Won Main Break, Plus What To Expect At Rottnest Island
22:06
Joe Turpel and Richie Lovett report from Margaret River to give us all the details of the back half of the Australian leg.

Sitting just off the coast of Perth, Rottnest Island is a tangible consideration if you don't fancy hours of driving and find the surf-starved city beaches aren't doing it for you. The island shares great immediacy with Australia's continental shelf, where coastal waters of up to 200 meters plunge away into the unending chasm of the world's largest ocean. Meaning swells arrive here unhindered from across the Indian Ocean, and like Margaret River - even though Rottnest is nearly 300 kilometers further north - they rodeo ride along on the hefty might of the Roaring Forties.

Long-time local and a Rottnest Island Boardriders Club founding member, Glenn Williams, is the epitome of local knowledge at ‘Rotto'. As a resident of 21-plus years, he's won several Boardriders championships and utterly breathes the place. He muses the power of Rottnest surf, "I have surfed alongside Hawaiian pros and advanced guys from overseas, and they have all commented on how much power this place has," he told me.

Hawaiians making complimentary remarks on surf energy should always make one take notice "As for a comparison with Margaret River, there is still power at Rottnest - but it never appears as raw here as down there."

And that's the great riddle of surfing Western Australia - it's a merciless and rugged place. The tally of east coast surfers who have never surfed out west - and never intend to - is vast. A majority of those who consider the long journey across the country quickly become mindful an extra inflight movie will find you poolside on the Bukit: Nasi goreng and warm picture-perfect waves galore.

Imaginably the biggest turn-offs are the incredibly riotous swells and high winds that are part of Western Australia's surfing scene. Rottnest's Strickland Bay is no stranger to either, and being as exposed as it is, will require light northeast wind patterns to create the waves we yearn to see the elite in.

The forecast models are already alluding to a start with a bang on day one of the waiting period (May 16-26). Williams, brought on as a conditions consultant with the WSL, sees some encouraging data lining up. "The forecast for the window is looking very favorable with at least one meter-plus of swell and winds from the north in there. I'm envisaging a few days to be bigger, but Strickland Bay will handle it easily. The right will get a little sketchy and shut down over 3.5 meters, but the left will handle up to 4.5."

It seems if the conditions play ball, Strickland Bay could serve up the level of excitement generally reserved for the likes of sizeable Teauphoo and Pipeline (not taking anything away from those two iconic locales). Fingers crossed. Australia is coming off the back of one of the worst years in recent history for fatal shark attacks. An objective eye might perceive the trend of attacks has moved in an easterly fashion. However, Western Australia has a convincing narrative of unprovoked fatal shark attacks.

Rottnest Island has one recorded fatal attack, when in October 2011, an American diver was taken on the island's north-facing Marjorie Bay. Since then, regular sightings and nerve-racking encounters - such as a father and son being circled on their inflatable dinghy by a 3.5-meter great white earlier this year - are pretty commonplace. You only need to recollect three seasons back when the entire Margaret River Pro 2018 was abandoned due to continued shark activity and attacks further up the coast.

WA has sharks. If you surf here, you need to accept it.

The WSL, in conjunction with the WA government, will be keen to ensure there are no hiccups, though. Tagged sharks are kept a close eye on in Strickland Bay with the implementation of a Vemco VR4 Global receiver - yet untagged sharks naturally are not. At the time of writing, an eyewitness reported a three-meter great white 100 meters from shore at Strickland Bay only a few days ago. In a positive light, we are well past the old days of competitors getting out there and taking their chances; abundant Jet Skis, drones, and spotters should ensure a safe competition for all involved. No one wants a repeat of the 2015 J-Bay men's final. 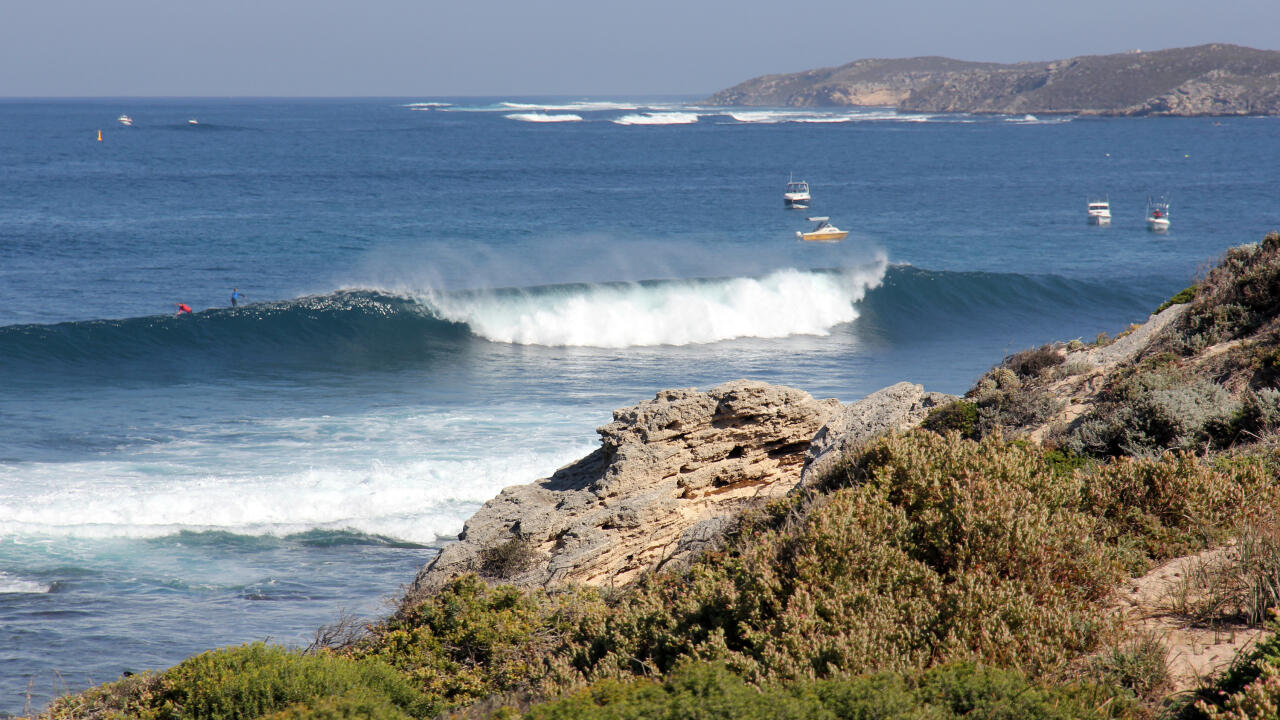 The Bay itself is a mixture of reef rock and sand and, like much of WA's serious breaks, is framed from the shore with a shallow limestone ledge. Often considered a toned-down Margaret's, the WSL will focus its attention here with prospective backup sites on the north side of Rottnest at the unadulterated bombie of Stark Bay - "a left-hand tube fest when it's on", Williams exclaims - and the much-coveted yet notorious Rotto Box to the west. It's no coincidence this break shares its name with its more publicized cousin to the South. Should the event call for heats here, be sure to catch the action: hire a babysitter, call in sick, or lock yourself in your room. Do whatever it takes - we could see the best heats of 2021 go down.

And what of the waves themselves? Can we expect huge, heel-digging cutbacks and the same sort of rail work we saw at Margaret River?

"At 2-2.5 meters, the right will offer a potential tube going into plenty of face for maneuvers with an end section over shallow, but not real sharp reef," says Williams.

A short pithy right gives the regular footers a reasonable chance to send combined scores well into the teens. And the left?

"As for the left, it can have a heavy barrel," Willams adds. "As the barrel goes high on the wave, it doesn't bowl top to bottom after the initial entry point. Rather, it squeezes into an almond shape at the end, which can at times clip you, it also offers plenty of canvas to work with, but the end section is on the surgeon's table, which is a very unforgiving piece indeed." Long, workable lefts will undoubtedly spread the field - for men and women - and should gift the goofy footers an edge.

But can we as spectators expect to see another exhibition of power surfing punctuated by the occasional barrel and the odd long wait between sets. Williams muses, "with the skillset and determination of these guys and girls these days, I would expect that the pros will be getting a lot of airtime on both the right and the left." John John Florence bowing out of the West is undoubtedly the biggest news for the men's competition. His departure through injury then left the door well and truly open for those with not only power but flair. It would be ignorant to ignore the success of the burgeoning Brazilian Storm and Toledo's takeaway win at Margaret's. Before this victory and De Souza's romping 2015 triumph, Brazilians have experienced little success competitively in Western Australia. It appears they might finally be cracking the code.

And what of the news legendary top-to-bottom maestro and tour veteran Taj Burrow joining the fray as a wildcard? Can we expect to see him getting anywhere near the later stages of the contest? If you've seen anything of Taj's surfing in the last 12 months, it's fair to say the man could very well still be on tour. Either way, his beaming smile and guaranteed injection of Aussie persona will be a welcome feature of the men's contest.

Looking at what Strickland Bay can serve up, we should see aerial specialists and tube hounds vying for the top points. Gabriel Medina and Italo Ferreira are likely standouts, as well as a handful of hungry outliers such as Ryan Callinan and Connor Coffin, who have both surfed extremely well lately. Anyone with a talent of threading tight tubes will also favor well here - Jack Robinson, we're looking at you.

On the women's side, an in-form and matured Caroline Marks was looking incredibly at home on the east coast of Australia; a lackluster performance at Margs should have her looking to make a stamp on the lefts of Strickland Bay. It's also hard to look past the perpetually strong and dominant Carissa Moore. Does she want another world title? There's no doubt. Aussies Tyler Wright and Sally Fitzgibbons have had a steady showing so far at home, but with the clock ticking and both hovering around that five spot…well, both have a reputation for performing in the clutch so we shall see. And has Tatiana Weston-Webb merely had a good run and is now due a meager result? Or is this finally a real title run for the Kauaian-Brazilian?

Rottnest Island looks to provide a similar flavor of Western Australian surfing we are familiar with, but with a stronger sense of Australiana. The contest accommodation, transport, and the event site itself will prove to have a more rustic and back-to-basics blueprint. Like any other visiting surfer to Western Australia, competitors will need to tune in, ensure their equipment is dialed, and then simply perform when the almighty Southern Ocean delivers.