The first day of the inaugural Rip Curl WSL Finals has been called a lay day, and as we await the swell to fill in and the call for competition to be on, we took a little dip of our own. While happily splashing through years of League data we got a snapshot of all the possible head-to-head matchups leading up to the Title Match at Lowers.

Coming up for air begged the question: Will competitive history repeat itself, or do the numbers only give an early indicator of what's to come?

While the rankings leaders -- Gabriel Medina and Carissa Moore -- will only surf one title-deciding, best-of-three match, the lower seeds will need to surf their way through the draw to get to the Title Match, and this is where things get interesting. Carissa Moore has the edge over everyone -- no other Finalist has a winning average against her. - WSL / Tony Heff

Let's kick things off with a bang. The single most explosive matchup in terms of shared World Titles would be the firecracker pairing of seven-time World Champ Stephanie Gilmore and four-time World Champ Carissa Moore.

World No. 4 Gilmore will surf in the first match, and would need to win three heats to find herself up against World No. 1 Moore in the Title Match. But if she does, fireworks are guaranteed. These two have a legitimate competitive rivalry, with 26 total head-to-head matchups over their careers with Moore having the edge 14 victories to Gilmore's 12.

There's a lot on the line for both these athletes. An eighth World Title would see Gilmore cement her legacy as the greatest female surfer of all time; she's currently tied on seven titles with fellow Australian Layne Beachley. Meanwhile, Moore has dominated this season -- including winning the first Olympic Gold Medal for surfing -- and she's in the best form of her career. 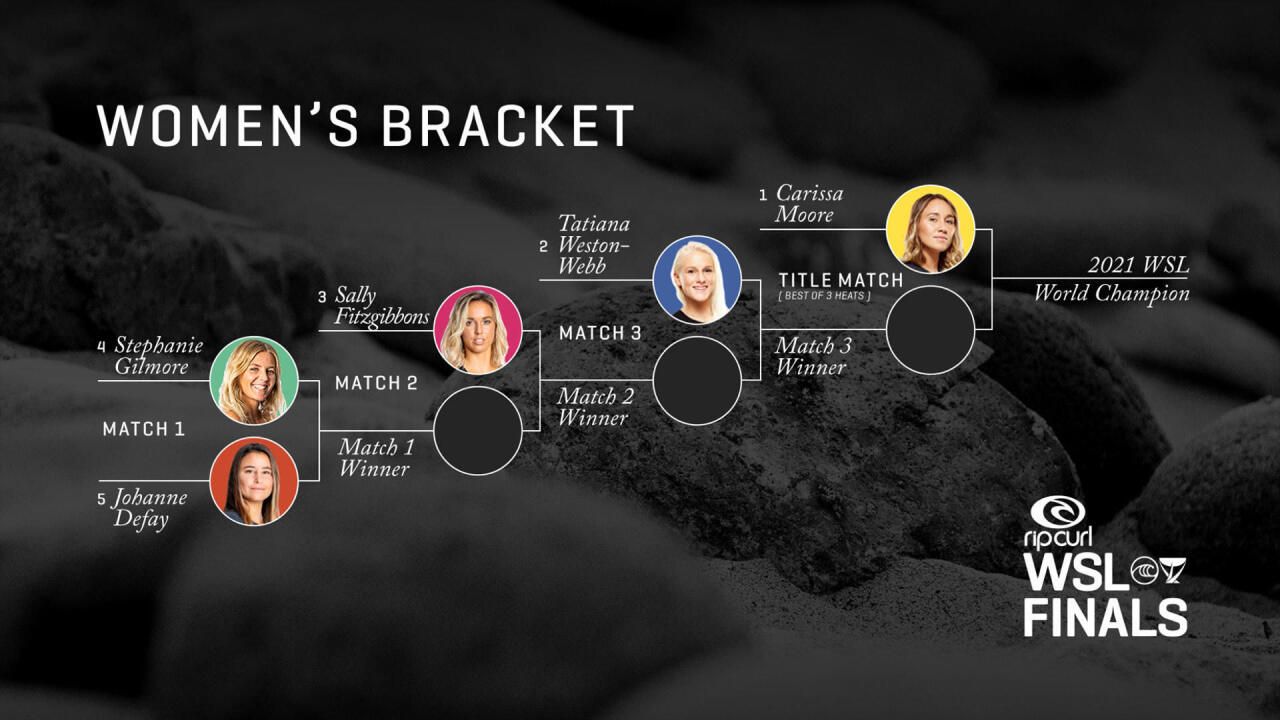 But to set this match up, Gilmore will need to do a lot of surfing. A statistically more likely matchup based on 2021 rankings would be Moore against World No. 2 Tatiana Weston-Webb. Weston-Webb put in the best year of her career with a blistering confidence that saw her claim a CT victory at the Boost Mobile Margaret River Pro presented by Corona, plus she'd only need to win a single heat to face Moore in the Title Match.

Moore and Weston-Webb have faced each other ten times in their careers, with Moore winning six of those heats. Moore also has a 13.50 average heat score to Weston-Webb's 10.32, giving her the edge should they surf for the World Title at Lower Trestles.

In fact, based on head-to-head wins, Moore has the edge over everyone. No other surfer in the WSL Final 5 has a winning average against her. Tatiana Weston-Webb and Stephanie Gilmore are tied on four wins each when it comes to their head-to-head stats. - WSL / Thiago Diz

However for some it's closer than others. Australia's World No. 3 Sally Fitzgibbons has won 12 of their 26 head-to-heads, notably Sally has the higher heat score average out of that exchange. While France's World No. 5 Johanne Defay has only won three of her 11 matchups with Moore.

Certainly an interesting heat would be Gilmore against Weston-Webb. They're currently tied on four wins each from their eight head-to-heads, and have a very close average heat score, 11.86 to 12.42 respectively.

If we see a battle of the Australians between Gilmore and Fitzgibbons, it's Fitz that will be fighting against the odds, with only 6 wins to Gilmore's 13 from their 19 head-to-heads. That means, based on the numbers, Gilmore is historically more than twice as likely to win as Fitzgibbons should they face each other. Stephanie Gilmore and Carissa Moore have had 26 head-to-head matchups over their careers. - WSL / Thiago Diz

Much like the potential Moore and Gilmore Final Match, the men's Title Match matchup everyone will be on the edge of their seat for should it transpire is World No.1 Gabriel Medina versus World No.2 Italo Ferreira. This would be a rematch of the 2019 World Title-deciding final at Pipeline, which saw Ferreira crowned World Champion. 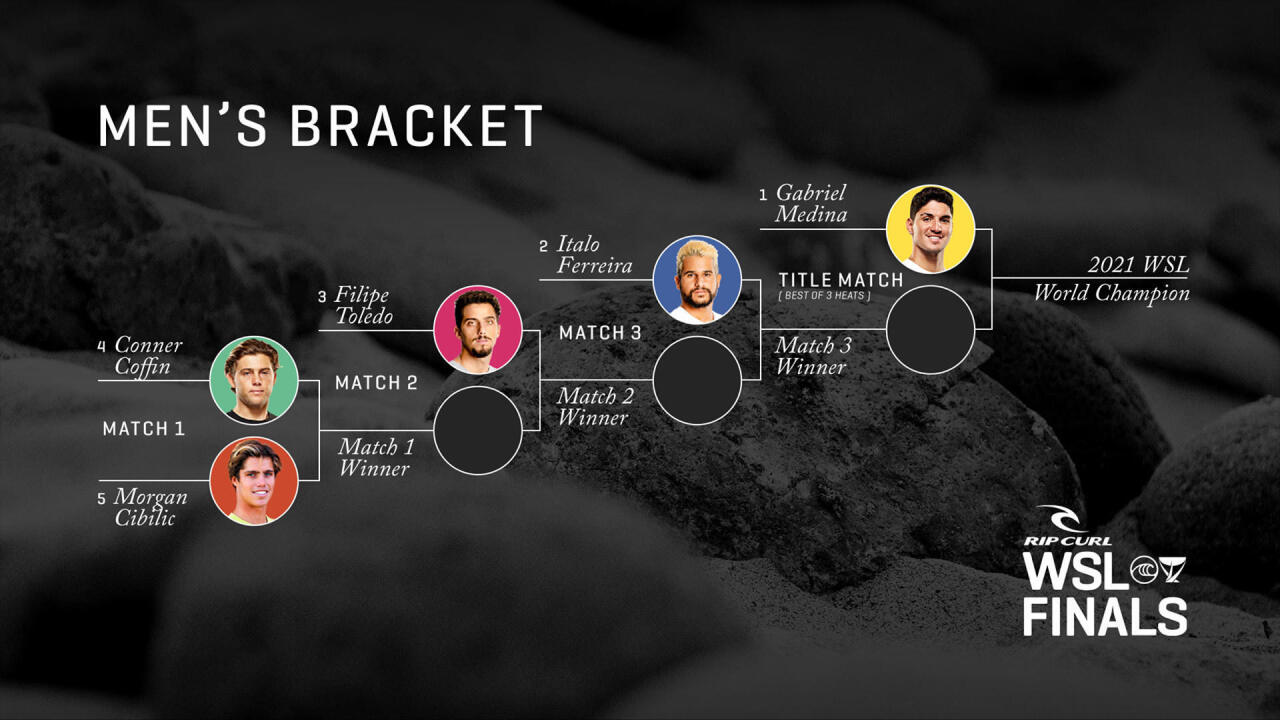 Another very explosive head-to-head would be Ferreira and fellow Brazilian World No. 3 Filipe Toledo, a surfer who knows Lowers like the back of his hand, and at times looks almost unbeatable in good, clean four-foot surf. They have faced each other eight times, and have four wins a piece.

Toledo also has a slight edge on Medina, though the pair have only faced each other five times, with Toledo winning three of those encounters. But this means the World No.2 and the World No.3 have won more than they've lost when they have faced Medina -- few surfers on Tour can say that. Italo Ferreira and Gabriel Medina had a head-to-head matchup at Pipeline to decide the 2019 World Title, which Italo won. - WSL / Kelly Cestari

To put that into perspective, World No. 4 Conner Coffin has never beaten Medina, and they have faced each other three times over their careers. Same for World No. 5 Morgan Cibilic who has also never beaten Medina. Despite being his first year on Tour, Cibilic has faced the two-time World Champion four times. Filipe Toledo and Italo Ferreira both have a slight edge on Gabriel Medina when it comes to head-to-head stats. - WSL / Thiago Diz

The respective World No. 1s have a clear advantage, only having to surf one best-of-three match to secure the World Title. Along the way though, we're going to see several do-or-die heats of elite talent who all know they can bag a World Title, too, by winning just a few matchups, like most have done before. Gabriel Medina thrives under pressure, and will only need to win a single best-of-three match to claim the 2021 World Title. - WSL / Tony Heff