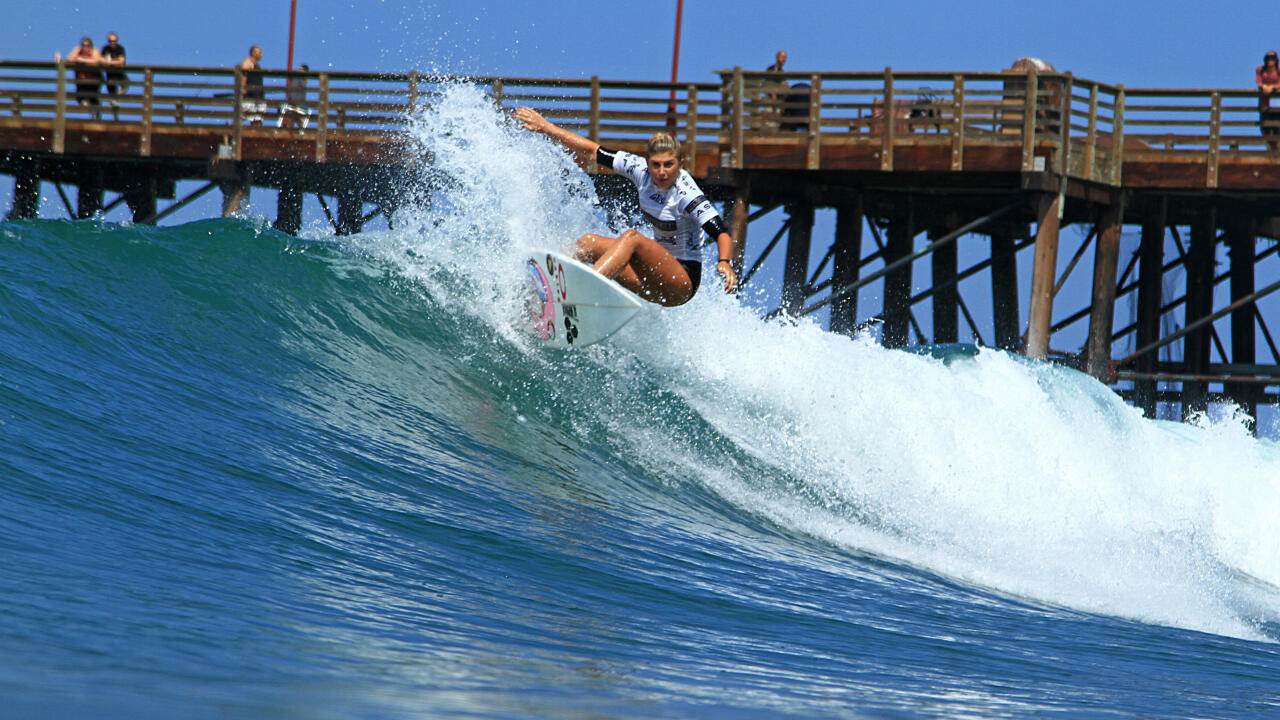 Sage Erickson is one of three additions to this year's Championship Tour roster. The California native is a returning member of the elite Tour after falling off for the 2014 season. But it was a tough road even before that: No stranger to adversity, in 2012 Erickson kept her spot on the CT through her Qualifying Series ranking, only to lose her major sponsor ahead of the 2013 season. That year, a string of poor results eliminated her from the CT and forced her to rethink her career as a professional surfer.

Finishing at No. 3 on the QS in 2014, Erickson is done debating. Just ahead of the 2015 season, she shared insights on lessons learned and why she's "never been so motivated." Next month, catch her LIVE on this site at her first event back, the Roxy Pro Gold Coast, February 28 to March 11.

World Surf League: Tell us about the biggest lesson you learned falling off Tour and how you think it will help you this season.
Sage Erickson: A year seemed, when I was falling off, like a huge amount a time ahead of me to figure out what I wanted out of my surfing career. If I still wanted to compete and go after the elite Tour or branch into the freesurf category. Personally I always wanted to prove to myself that I deserved to be among the Top 17. I wasn't quite sure what my year would look like competing on the QS and how my year was going to play out. Last year gave me a chance to step back and watch what the Tour is really all about -- with the commentary, the heat analyzers, more events in amazing waves. I got to look at how to surf a heat [by listening to] the experts.

WSL: Did that help you figure out a heat strategy for this year?
SE: In a way, but more or less the fundamentals of good technical surfing. When I competed in the years prior, I didn't have the best run of results. I was constantly leaving each event early. I never got a chance to take a step back to see what you actually need to do to be in the Top 17. I learned what it takes to be on Tour and what it takes to stay there, how you have to perform and the focus and dedication it takes to be on the top level. The commentary is so informative these days it's like an encyclopedia on surfing, which is extremely helpful competitively.

WSL: Can you reveal any training you're doing outside the water?
SE: On a mellow side -- for my mental sanity -- I've been going hiking a lot up in the hills of Ojai. For more intense training, I've gotten into a body combat class, which is a lot of hard cardio. You go through numerous fight mentality series and it helps to get [me] out of daily life to a zone where I'm focused on one thing. Being a professional surfer, all the pressure is on your shoulders. It's the same in body combat. It's you against whoever you're envisioning as your opponent. It's something new I've never done in the past. I enjoy so much of being on Tour with the girls and getting to know them better each day that it's sometimes hard for me to be aggressive. I wouldn't say that I'm naturally an aggressive person. The body combat is training me to be aggressive when I need to be. WSL: How does training factor into your mental game?
SE: Training gives you that edge that you deserve to beat that other girl. That you've worked harder. That you've put more time in. The ocean is going to favor you in that sense. As a competitive surfer you're always trying to figure out how to put yourself in favor of the ocean because it is so unpredictable. The harder you work outside the water brings momentum towards you. When you have really strong momentum, you can be unstoppable.

WSL: What are your motivation levels like these days?
SE: I've never been so motivated in my life to live it to the fullest. I constantly want to push myself harder and harder and never want to be satisfied with just being content. I wake up at 5:30 a.m. even on the weekends lately. Not because my alarm is going off, but because I'm excited to see what the day is going to bring and I'm excited to surf. I've re-fallen in love with surfing and being in the ocean. Not that in the past I took the lifestyle for granted, but that I just didn't see it in the same perspective.

I've re-fallen in love with surfing and being in the ocean.

My motivation comes from my own self-discovery and watching the other girls kick [butt]. Growing up as a tomboy I always aspired to prove that [girls] have what it takes. I find motivation off the Tour expanding and seeing new and better places [to compete] and the girls getting the respect they deserve. Also just the mainstream attention outside of the endemic surf world. I think the world is starting to fall in love with women's surfing and each girl is playing a part in that. I get excited about that whole idea because we all know that competitive surfing doesn't last forever.

WSL: A lot of CT surfers these days have a few people on the beach. Do you have anybody on your "Tour team"?
SE: That's been one of the toughest things for me in the past, not having a major sponsor. I don't have the support or the ability to financially have a full-time coach in my corner or to afford to have certain people travel with me. But this year I hired Glenn Hall on as my surf coach and it's really cool to see the WSL gave him the injury wildcard. I think he'll be at eight of my events. I'll have a pretty good guy in my corner, that knows his stuff and has worked really hard to get where he has. I'm sure my brother Noah is going to be there for at least half the events too. WSL: What makes you the most nervous about the upcoming season?
SE: I find myself getting nervous about having that prestigious jersey back on and having the obligation to perform at a certain level at every event, consistently. Every girl on Tour can win a contest, so you have to be on your best game. I think it will take one or two events to actually realize that I'm back on Tour and that I deserve to be there. Whether it's sinking my toes in the sand at Snapper or my first heat with my jersey on, we'll have to see.

WSL: Surf gear aside -- what are three things you'll be taking with you?
SE: My journal, I'm a religious journaler. It's my quiet place and where I document what I do in the day and what I experience. I want to be able to look back on that and read all the stories and experience that I lived throughout my life. I'm so blessed to do what I do. I always add a happy shirt, some kind of loud printed shirt that whenever I put it on I'm just stoked. Maybe a sick pair of boots, because if you've got a [rockin'] pair of boots you feel like you can take on the world.

WSL: This is a tough one, describe yourself in three words.
SE: Oh god. I would say one would be optimistic. I don't think anything is good or bad in your life because I feel like it teaches you something one way or another. (Pause) Can I say loving?

WSL: You can say whatever you want.
SE: (Laughs) Okay optimistic, loving and...driven.

WSL: What else are doing to keep yourself relaxed over the season?
SE: Even though I'll be on Tour again, I still want to involve myself in a lot of creative projects outside of competing: Documenting the way I travel, sharing what's going on behind the scenes at events and different places. I just did a little short film with a friend that was a creative project we produced. We'll see...