The Big Surf Invitational launched today in excellent waves, completing four hours of competition. Some of the best surfers in the world put on an incredible show of high-performance surfing in front of the French crowds.

Session 1 consisted of the eight men taking over a three-to-four foot lineup with pumping lefts and rights and a light onshore wind favorable for aerial manoeuvers. #TeamBoal took a slight advantage over their competitors, with team captain Tim Boal scoring a near-perfect 9.77 for a flawless wave on his forehand. The former Championship Tour competitor proved his game is still on point with four huge manoeuvers on a beautiful righthander. 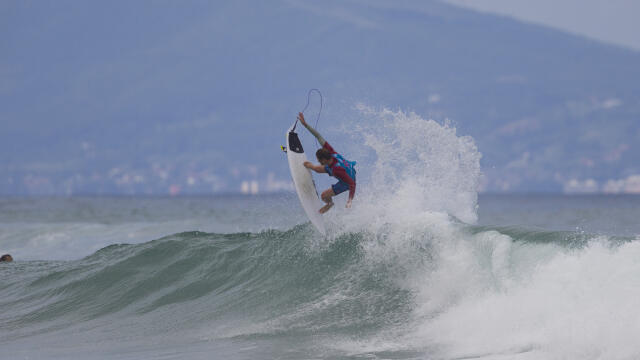 "It was so much fun, we're lucky to get excellent waves today," Boal said. "I haven't surfed a lot for the past 2-3 years and I started to get back into it more those last few months and it feels great ! Music is a the perfect complement to surfing and with a crew of friends we do a few charity events which is fun."

Marc Lacomare & Ramzi Boukhiam contributed to their team win as well with their somewhat similar powerful approach. Lacomare even momentarily traded his board for a 9'+ longboard he borrowed from Antoine Delpero and proved to be perfectly versatile with this new equipment.

Before lending his longboard, Delpero belted the highest score of #TeamMauvin, an excellent 9.00 out of 10 for a perfect blend of nose-riding and high performance turns.

Charly Martin took it to the air to score high on behalf of #TeamMauvin and his aerial prowess coupled with solid forehand hacks proved essential for the team to stay in the fight all the way up to the final moments of the session.

"We had so much fun, the peak was great and the ambiance was really fun out there," Martin commented. "It's a good warm-up for those of us who are going to California soon for the QS10,000 and a really cool event to share amongst friends."

The final tally sees #TeamBoal in Blue with 166,8 points taking out the first session over #TeamMauvin in Red with 159 points.

Session 2 kept the action alive with the women finding their own share of fun peaks on the incoming tide. Justine Mauvin led her red #TeamMauvin to victory with two excellent scores on lengthy nose rides, and with the help of Coline Menard, Justine Dupont and Maud Le Car. "We had a blast with all the girls out there," Mauvin said. "There was such a great atmosphere in the lineup with everyone chatting and messing around. We're all good friends and even though there's judges and scores it really didn't feel like we were competing against each other rather than just pushing each other to surf better."

"No matter what board you use, I think we all proved everyone can rip and shortboards and longboards in the exact same conditions worked great, everyone caught good waves."

Later in the afternoon, the tide dropped sufficiently to let more waves in the two-to-three foot range roll through at CÃ´te des Basques. An easing side-onshore wind gave surfers playful conditions to play with and action resumed with the women leading proceedings.

History repeated itself with #TeamMauvin taking out the women's session while #TeamBoal confirmed their excellent form and dominated the men's side of the draw.

With two wins under the belt for each team, Tuesday's tag-team session will decide the overall winners in an original format. In the morning, the 'Handi Surf' session will mix professional surfers and surfers with disabilities, while the official call for the final heat is set to 6pm.