Many of the world's best surfers are flocking to Maresias for the Oi HD Sao Paulo Open of Surfing, but none greater than current WSL Men's CT World Champion, Gabriel Medina (BRA), who as a grom, honed his skill in the water at the barreling beachbreak on the coast of Sao Paulo.

In addition to Medina, all of the current Brazilian surfers on the Championship Tour will also be competing at the event, as well other CT and QS surfers looking to strengthen their Qualifying Series rankings. The winner of the Oi HD Sao Paulo Open of Surfing will take home U$40,000 in prize money and 10,000 points. The event promises to repeat last year's success, where a crowd of over thirty thousand people gathered at Praia de Maresias for the Finals. 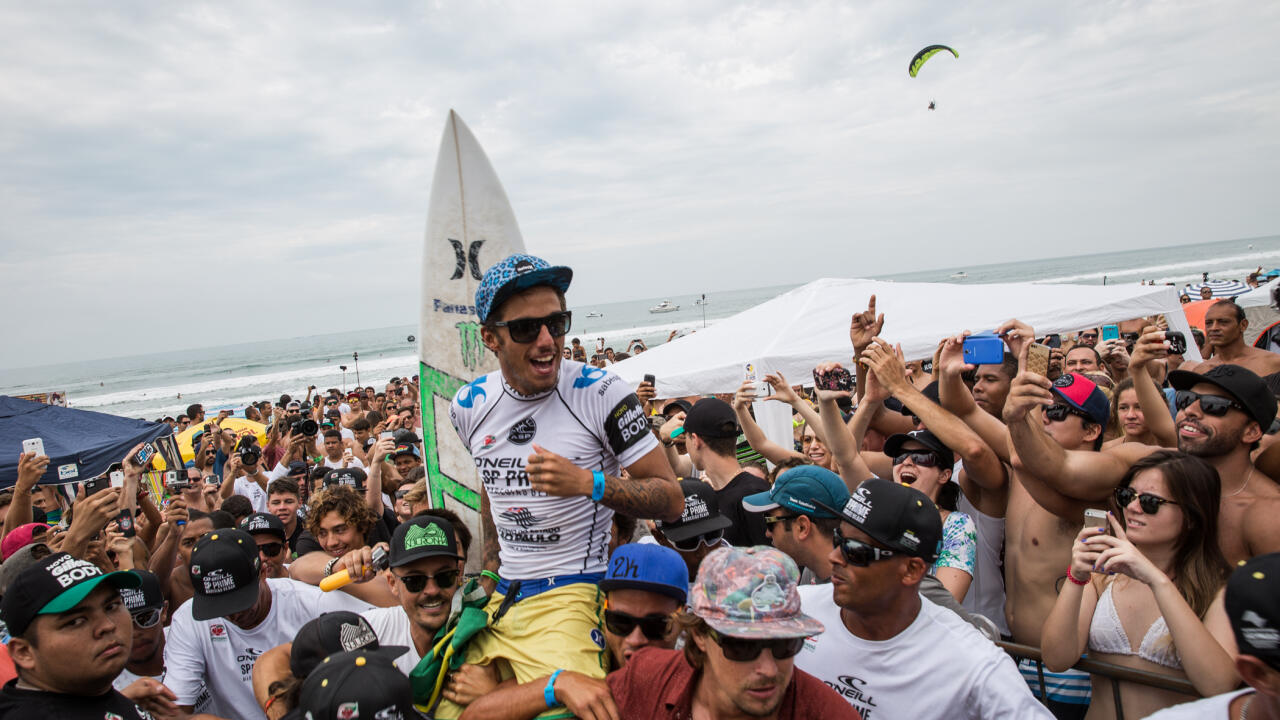 "We're expecting even more this year," said Xandi Fontes, one of the Event Organizers of the Oi HD Sao Paulo Open of Surfing. "The sport of surfing is thriving at the moment in Brazil. We've got our first World Champion with Gabriel Medina and four Brazilians are currently ranked in the Top-8 on the CT. In regards to the event, Medina will be competing at home, Filipe Toledo is surfing incredibly well and will look to defend his event title and Adriano de Souza is fighting for another World Title for Brazil."

Sergio Pellegrino, another Event Organizer, spoke to us about the importance of the partnership between the State Government of Sao Paulo and the sport of surfing, as well as the increased involvement of event sponsors: Oi and HD (Hawaiian Dreams).

"Despite all of the current difficulties in Brazil, we've had the complete support of Governor Geraldo Alckmin," said Pellegrino, who is responsible for organizing the event together with Xandi Fontes, Luiz Tuzino and Dany Boi. "His belief in the sport has made it possible to maintain this incredible event." "Nowadays, Oi is very influential in Brazilian surfing," Tuzino said. "They sponsor events on the World Tour, the Brazilian national circuit (Super Surf) and the athletes Gabriel Medina, Filipe Toledo, Adriano de Souza and Silvana Lima. It's making a big difference in our sport. HD is a traditional surfwear brand that has strong ties to competitive surfing and currently sponsors Adriano de Souza, who might win his first World Title this year. Nosso Lar has already had links to surfing and sponsors national events as well as the newest Brazilian member to the CT in 2016, Alex Ribeiro (BRA).

Roberto Perdigao, WSL South America Regional Director, praised the achievement of running a QS 10,000 event on the coast of Sao Paulo, which will attract a large number of international athletes, aside from the complete group of Brazilian surfers currently on the CT. "Once again, the world's elite surfers will return to Brazil for another spectacular event," stated Perdigao. "The Oi HD Sao Paulo Open of Surfing in Maresias will be the cherry on top of an incredibly important Brazilian-leg of events. The high level of surfing being executed by our athletes on the CT, Medina's victory in France and the guaranteed presence of international surfing idols are explosive ingredients and create fantastic expectations."

Last year, the packed crowd at Maresias went delirious as Toledo displayed radical surfing above the lip and precise carving below it as he defeated Matt Banting (AUS) in the Final. Other standouts were Italo Ferreira (BRA), who guaranteed qualification onto the Championship Tour with a 3rd place finish, as well as Carlos Munoz (CRI), whose surfing is as contagious as his upbeat demeanor. The WSL QS 10000 Oi HD Sao Paulo Open of Surfing is the 34th QS event of 2015 and is the last one before moving on to Hawaii for the Triple Crown of Surfing.