Highlights: Huge Performances at Sunset
2:08
The second day of action at the Vans World Cup of Surfing featured massive waves and incredible performances.

Sunset Beach churned out classic heavy water conditions for Round 2 of the Vans World Cup Sunday, pushing surfers to the brink as they battled wave face heights of 20 feet-plus. The conditions delivered brilliant rides balanced with heavy wipeouts and hold downs.

The superheat of the day kept spectators on their toes as Hawaiian Ezekiel Lau, North Shore specialist Jamie O'Brien, California's Patrick Gudauskas and Italy's Leonardo Fioravanti went blow for blow on Sunset's freight train-sized waves during the second event of the Vans Triple Crown of Surfing. Ezekiel Lau sets up at Sunset, but narrowly misses out to Jamie O'Brien (HAW). - WSL / Masurel

Gudauskas and O'Brien advanced into the next round, but left a major upset behind: Lau needed a Semifinal finish to requalify for the Championship Tour, but fell .06 points short to O'Brien's final wave with only seconds left on the clock. This result also affects his chances of securing a Vans Triple Crown title. Both Hawaii athletes will meet again in the Pipe Invitational, during the Billabong Pipe Masters from December 8 - 20.

Gudauskas posted the highest wave score of the day, an 8.83 for a giant barrel that required expertise in the takeoff. The seasoned surfer added a couple turns and a chop hop to finish things off with control and style. Patrick Gudauskas (USA) sets up for a powerful turn at Sunset. - WSL / Masurel

"I wasn't expecting to get barreled, I actually went out there trying not to get barreled because I feel like it's too high risk," said Gudauskas. "But that wave was sick, Jamie tried to pull in to the one before it and just missed it so I figured I had priority and I just knifed it super hard and it kind of did -- the watermelon seeds squirt out. It was probably my favorite heat to see on paper, Jamie and Zeke and Leo were surfing incredible the whole time. I was psyching."

Joel Centeio (HAW) tied with Gudauskas for the highest wave score of the day, an 8.83, which catapulted the Haleiwa surfer into first position to advance to the next round. Centeio's confidence in the giant surf and combined wave score of 14.86 put him well beyond competitors Mitch Coleborn (AUS) (8.54) and Dion Atkinson (AUS), while Vasco Ribeiro (PRT) progressed through with an 11.57.

"It would mean the world," Centeio said, of potentially winning at Sunset again. "I'm into Round 3 now and the waves are big and I'm pretty comfortable when it's like this. It's just one of those things -- you got to get out there, it's Sunset, it's challenging. Every heat is different so I just have to adjust and make do and keep making those heats." 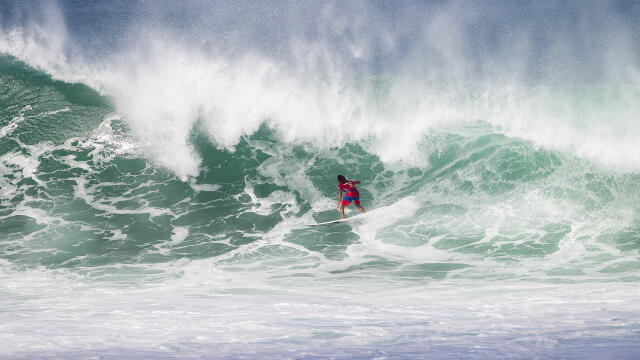 Costa Rican Carlos Muñoz stayed busy during his heat against Yadin Nicol (AUS), Cooper Chapman (AUS) and Thiago Camarao (BRA), posting a 7.33 and 4.37 to keep him in first place just narrowly ahead of Nicol. After an intense wait for scores, Muñoz and Nicol advanced into the Round of 64.

The second Costa Rican to advance today, (Noe Mar McGonagle being the first), Muñoz is sitting at 31 on the Qualifying Series (QS) rankings and is motivated to advance to the Championship Tour.

"I've always been dreaming to be on the Tour and I'm going to keep on hunting that dream," he said. "I just want to keep surfing, this is my last event of the year and I hope I can keep going and keep making heats and in the end I hope my surfing talks better than me and keeps going." Uruguay's sole surfer Marco Giorgi (URY) and French surfer Joan Duru edged out Hawaiian powerhouse Sunny Garcia and Brazil's Hizunome Bettero to advance in first and second respectively. Giorgi showed control throughout his heat with smooth, off-the-lip backhand attacks to tally a 13.50 heat score. Garcia paddled to shore with three minutes left on the clock after scoring a 0.57 and a 1.50.

An 8.00 by Aritz Aranburu (ESP) was one of the best single-wave scores of the morning, which saw some barrel coverage and a nice carve to finish. Aranburu's backup wave of a 6.67 was enough to see the Spanish surfer advance to the next round, but it was Maui's Torrey Meister who took the heat win with a 6.67 and 7.17. "Felt good to be out there again, I love Sunset, it's my favorite wave in the world," said Meister. "Just kind of nursing some injuries and it feels good to be on a big wave and doing long turns and not trying to do airs or anything like that. I enjoy surfing this wave more than anywhere in the world, stoked." Australia's Jack Robinson continued to impress the crowd with his fearlessness, and tackled the triple-overhead waves with poise and panache. Robinson advanced ahead of Ricardo Christie (NZL), Willian Cardoso (BRA) and Evan Valiere (HAW), respectively, with the highest single wave score of the heat, a 7.67, and a 4.00 to back it up.

Two full days of competition are left before a Vans Word Cup champion is crowned. With the forecast for the remainder of the period packed with solid surf, check back daily at 7:30 a.m. local time for the latest call and more action from Sunset Beach.

Mick Fanning takes down an all-CT final heat for the win, his maiden victory in Hawaii.