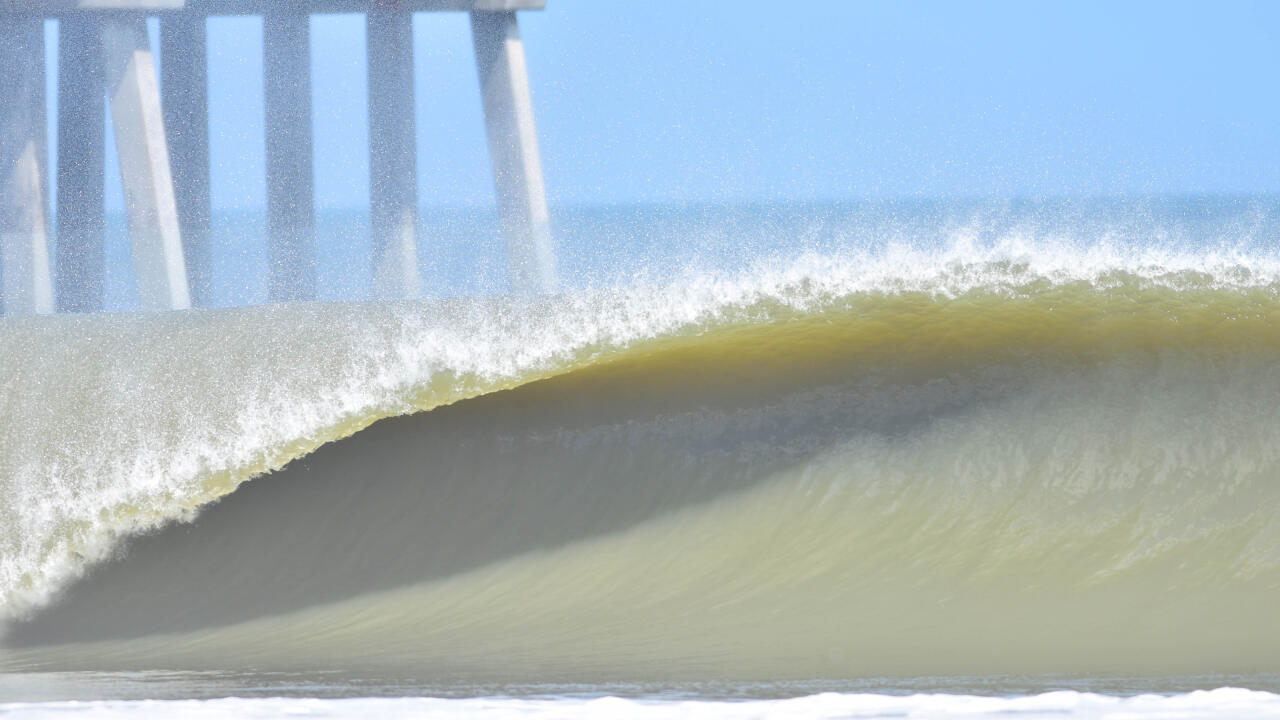 One of the most memorable days of competitive surfing on the East Coast unfolded Thursday at Jennette's Pier. - WSL / John Ferguson

There are a few days in competitive surfing that will go down as some of the most noteworthy in Qualifying Series (QS) memory, and Thursday was among them. The WRV Outer Banks Pro QS1,000 pres. by Pacifico received all-time, five-to-seven foot swell that offered countless barreling waves throughout the entire day of competition, which determined the Quarterfinal draw.

A total of twenty heats yielded twenty-seven excellent scores, meaning they ranged from an 8.00 to a 10, and twelve of them came out to near-perfect 9-point rides -- along with one perfect 10. Costa Rican competitor Tomas King re-emerging after a full cover-up before getting his railwork in for a perfect 10. - WSL / John Ferguson

Countless barrels were ridden, but only one was deemed worthy of perfection as Tomas King received one of the prime views of Thursday's action and made it out to finish off the wave. The Costa Rican is back into a second consecutive Quarterfinal appearance and hungry for more.

"This morning was just amazing trading off barrels, and some of the best conditions at a contest I've seen," King said. "You forget you're in a contest and everyone is just trying to get the best waves out there regardless. I'm coming off that good result in Virginia and just having fun here, and would love to finish off strong." Chris Michalak came to the Outer Banks as the sole Aussie at this event and is following the path of fellow Australian surfer, and last year's event runner-up finisher, Jordan Lawler brilliantly. The Port Stephens, Australia, native looked unstoppable with three near-perfect rides throughout the day -- including a 19.36 heat total (out of a possible 20) in his Round One debut.

"I'd be stoked if I could win this thing, but I wasn't even thinking about that today and just tried to get kegged out there," Michalak said. "I just wanted to get deep in there because I knew that's what they were scoring so I'd look at a few and think I wouldn't be deep enough, and just wait for that special one. I just missed out on the cut for the QS6,000s, but I've come here with some good lads like Kevin Schulz and Logan Landry so that's great to have some good people around you." Florida-turned-California transplant Dustin Richardson -- aka "Johnny Tsunami" after today's heats -- put on a tube-riding clinic of his own with a massive Round Three performance in which he earned a 9.37 and 8.27.

"I feel like I'm in a dream, you can't really beat these kinds of waves for a contest," Richardson said. "I wasn't really planning on doing an event after seeing the forecast for Virginia, but then saw this one and thought, 'I have to go.' It's hard to think about a competition when the waves are this good -- I just wanted to stay in there as long as I could and get as deep as I could every time" While it may be hard to distinguish that it's Tommy Coleman in this barrel, the goofy-footed Floridian could tell you the firsthand account. - WSL / John Ferguson

Tommy Coleman's career is just beginning to take off -- much like his commitment in Round Two. Though he fell short of a heat win, an impressive 16.87 heat total he left those below him in a combination situation and now looks forward to his second 2017 Quarterfinal appearance at the QS level.

"Getting those scores in my first heat gave me a lot of motivation to keep having fun out there," Coleman said. "I actually wasn't even going to do this event, but a few of my friends all entered and encourage me to so I'm stoked I did. The waves are pumping and I did pretty well so I'm definitely happy." Gabriel Morvil paid no mind to the rising tide and found some walls to lay into. - WSL / John Ferguson

Fellow East Coast surfer Gabriel Morvil hails from Wrightsville, North Carolina, and waits for today's type of conditions every autumn. Morvil dialed in the slight change of conditions during his heat, after putting on a tube-riding display of his own in Round Two, and found his way into the Quarterfinals thanks to his powerful backhand.

"It doesn't get like this often, but when it does it's so nice and with hurricane season starting we'll start see a lot more of it," he said. "I feel like I'm just freesurfing out there. But, toward the end it got a little fatter with the tide coming in so I just laid in to some turns the best I could. It was nice to get those two excellent scores to start the day off, it made me feels strong heading forward and now hopefully get some more waves for finals day."

Event organizers will reconvene at 7:30 a.m. EDT for a possible 8:00 a.m. EDT. start to determine if Quarterfinals will run. The final eight will be yearning for something remotely similar to Thursday's all-time conditions when the first call is made. - WSL / John Ferguson