After a marathon Finals day, Kevin Schulz won his first-ever WSL Qualifying Series (QS) victory at the Jack's Surfboards Pro QS 1,500-level event in phenomenal fashion. It was a race to the finish as both Schulz and eventual runner-up Ian Crane surfed fives heats each before the day's end to earn the top two spots.

An all-San Clemente, California, Final affair between Crane and Schulz ensued, but it was Schulz who came out on top, with an incredible 17.10 (out of a possible 20) heat total. Schulz delivered air after air in the Final -- not falling on any of his attempts. - WSL / Andrew Nichols

"I surfed a lot of heats today and I'm really tired, but I can't stop smiling -- I'm over the moon," Schulz said. "My whole family is here and to have that Final with Ian was great just to keep it in town. I couldn't hear any scores just with the wind so I was just freesurfing out there and I came in from the water to my family clapping, and just couldn't believe it." 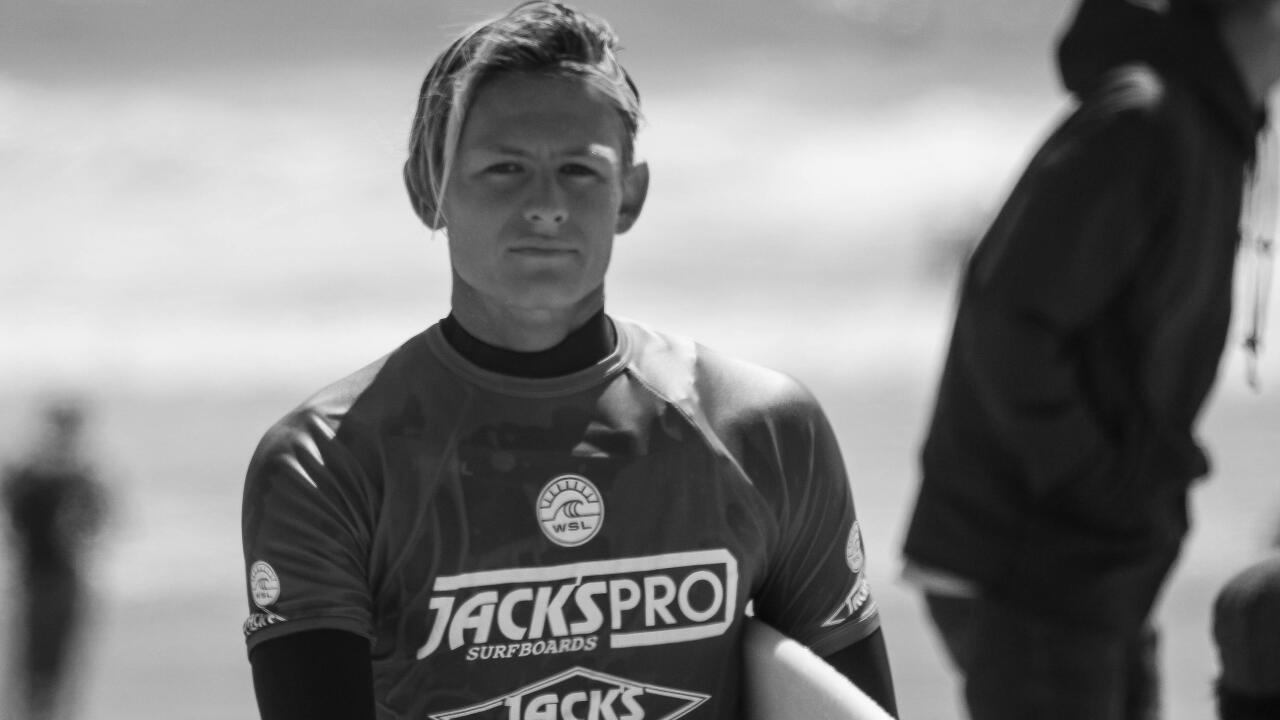 Schulz's approach was much more light-hearted than pictured -- but, not after thinking he'd just lost in the Quarterfinals. - WSL / Andrew Nichols

Schulz's air-game was intact and overwhelmed his hometown opponent with a near-perfect 9.50 (out of a possible 10), double-grab rotation, to put Crane in a combination situation -- meaning Crane needed two new waves to equal Schulz's total. The 22-year-old came out of the water elated and exhausted after steaming through Round 4, 5, Quarterfinal and Semifinal bouts that he narrowly escaped with last-minute efforts. Schulz now sits at No. 40 on the QS rankings.

""It's just so close to home, I grew up surfing here throughout all the NSSA, and to win against the field that was here is just insane," Schulz added. "I couldn't even dream of winning this thing. I feel like I didn't peak until the Final and those leading up to it were pretty stressful, knowing I wasn't doing my best surfing. But, now I've got some points going and I want to keep this going to the bigger events, and hopefully start getting into those QS 6,000s by the cutoff." Though Schulz's performance cast a shadow over Crane in the Final, the QS veteran was no slouch en route to the final horn. The 24-year-old eliminated an in-form Jordy Collins, 2017 North America Regional QS Champion, in the Semifinals and overcame 2018 QS threat Jake Marshall with a buzzer-beater. Crane's ambitions remain high and this result gave him yet another boost of confidence, as well as momentum heading forward.

"I didn't take my wetsuit off once today and I'm definitely feeling it," Crane said, laughing. "There were a lot of big names in the event and just to make the Final feels pretty good. Pretty bummed I lost it, but it's the first Final I've ever made. I'm trying to figure out the more competitive side of surfing heats still and learning what to do after I've made some mistakes. I'm back into the QS 6,000s and QS 10,000s again this year and my goal is to be in that Top 10 by the end of the year." Nolan Rapoza brought his own air-game ready to take on the marathon day. - WSL / Andrew Nichols

Nolan Rapoza's form was on point throughout the weekend's action that culminated in a Semifinal appearance before heading off to Barbados. The 20-year-old was a standout until facing elimination by eventual winner, Schulz, and will walk away with 840 valuable points toward the international QS rankings -- and 560 toward regional rankings. Jordy Collins is into the QS 10,000s this year and showed his potential to be a threat on finals day. - WSL / Andrew Nichols

Also earning a big Semifinal result, Jordy Collins stunned the event with a huge win over former Championship Tour (CT) competitor Alex Ribeiro in the Quarterfinals -- who had the day's top performances in both Rounds 4 and 5. This is Collins' first North America QS event after claiming the Regional Title in 2017 and looks toward competing in the QS 10,000s -- beginning with the Ballito Pro in South Africa later this year.

The next stop on the North America Regional QS schedule will be the Barbados Surf Pro Men and Women's events March 27 - April 1.