Could this be Seth Moniz's year? The Hawaiian, who turns 21 just after the Vans US Open of Surfing, has a good claim to be owning 2018. Whether driving through massive Pipeline barrels, doing backflips in Texas or smashing QS heats, it has been impossible to keep your eyeballs off the electric naturalfooter.

While still young, many experts had long predicted that Moniz had the talent to make a serious impact on the surfing world. This was partly based on his impressive surf-laden DNA. He is the youngest of five surfing siblings, all born within six years of each other. With dad Tony being one of the pioneering Hawaiian professional surfers of the early 1980s, his sister Kelia Moniz being a two-time World Longboard Champion and Joshua Moniz being the winner of this year's Volcom Pipe Pro, some might think Seth's path to surfing stardom may have been worn a little smoother by his family heritage. Heritage, style and progression. This kid has it all. - WSL / Kelly Cestari

Yet that would be a disservice to the hard work the youngest Moniz has put in over the last few years. At home at Oahu he has spearheaded a pack of Hawaiian teenagers including Finn McGill, Barron Mamiya and Makana Pang that have established a spot in the Pipeline lineup, surfing's hardest to infiltrate pecking order. Away from his Pipe freesurfing cred, he's also done two years on the QS - slowly lowering the gradient of professional surfing's steepest learning curve.

The signs were positive, the talent blindingly obvious, but the results however weren't there. Moniz had a strong, yet not exactly spectacular, finish to 2017. A third place in the Pipe Masters Invitational saw him just miss out on the Wildcard spot for the main event. On the QS he ended up rated 87 which although a big jump from his 142 finish in 2016, wasn't exactly rattling any CT cages. 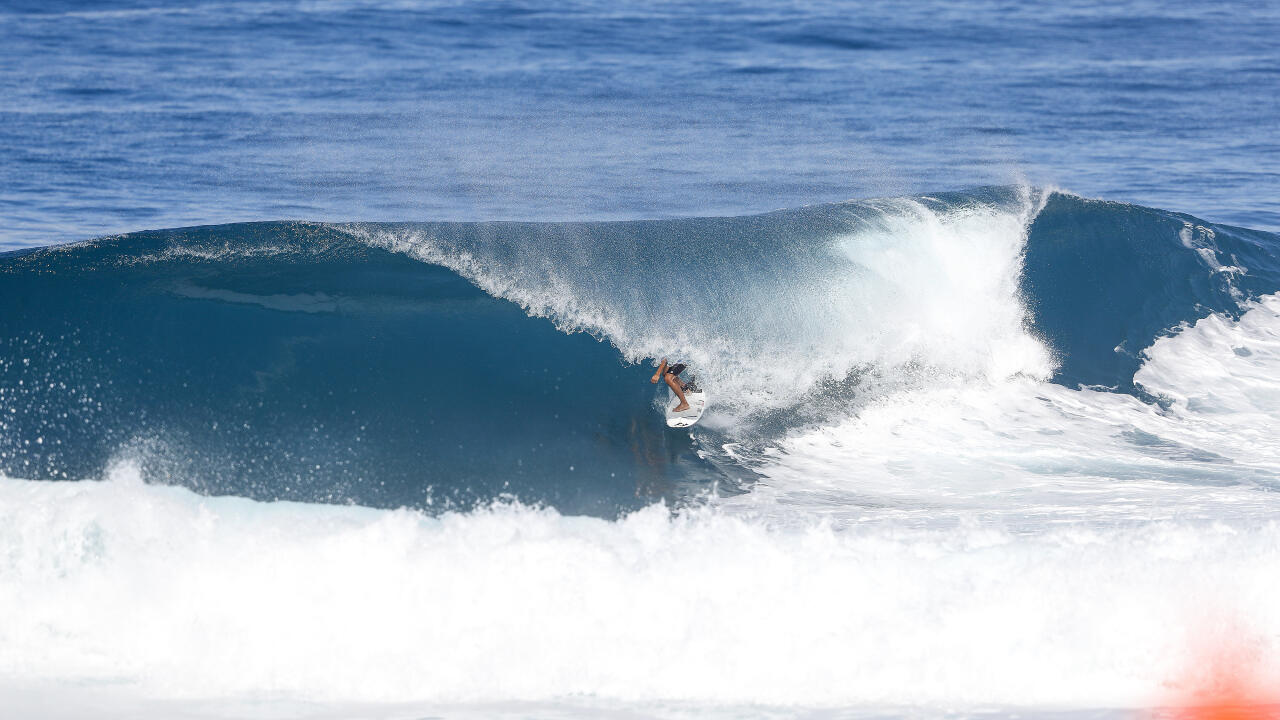 On the way to the Final at the Pipe Masters Invitational. - WSL / Damien Poullenot

The Australian leg of the QS however yielded two heat wins at the start of 2018. In May though something clicked. First there was his backflip performed at the Waco pool in Texas. A Backflip has been done before, but never 1,000 miles inland and never with such technical butter. That single move may have bent surfing's course just a few degrees.

It's hard to quantify the effect that those three seconds had on Moniz, but in the very next event in Japan, it seemed a new confidence was evident. A perfect 10 in Round 4 propelled him to his first QS 6,000 Final. A month later, his Semifinal finish in the QS 1,0000 Ballito Pro added another 6,500 ratings points to his tally. With a flip and a blink of the eye, Moniz had vaulted to No.2 on the QS ratings and doubled his points tally for the whole of 2017.

The Vans US Open Of Surfing, the second of the five QS 10,000 events on the calendar, now comes at a perfect time for the in-form Moniz. Huntington Beach provides a platform for which Moniz's lightening speed and progressive airs can further distance himself from his peers. A big result in California should see Moniz edge closer to the CT and his destiny. We'd advise you watch him closely. Get to know this dial. - WSL / Damien Poullenot