The Brasilian screamed to the skies in pure elation after taking down Chauncey Robinson in a stunnding performance. - WSL / John Ferguson

This event marked a long-awaited, breakthrough win for Pulga and the outpouring of emotion from the 20-year-old showed what it meant to him after taking down one of the event's most in-form surfers Chauncey Robinson in the Final. The Sao Paulo, Brasil, native continued his impeccable run despite a paddle block to begin the Final, but recovered brilliantly and posted a 7.17 (out of a possible 10). Robinson tried to respond, only garnering a 5.17, before Pulga went to work on his vicious forehand attack one more time for an excellent 8.50 to put the Floridian in a combination situation he was unable to recover from -- keeping the WRV Outer Banks Pro title in Brasil for another year.

"It's just a dream come true and it's the best day of my life, I still can't believe it right now," Pulga said. "I just want to say thank God and my family, and to all those who have supported me because it's been a hard year after losing my sponsor. I had a lot of people that helped me and my friends have been amazing, this win is for all of them and I didn't come for anything less than a win." Pulga's rail-game was his bread and butter throughout the event and rarely took to the air. - WSL / John Ferguson

Pulga battled through an all-Brasilian Semifinal affair against QS veteran Alan Donato after eliminating top QS threat in attendance Cam Richards in a big Quarterfinal, after already having won his Round 4 heat. Now, the Brasilian prepares for more events with his focus ready and has the confidence to back it up after putting together a flawless run in Outer Banks.

"I think God gave me a lot of opportunity in this contest at the right time in my heats and it was up to me to perform," Pulga added. "The waves were so good and we could really show our surfing the last two days. Getting those scores got my confidence up and now I'll go to the Philippines for a chance at more points there after earning some money here. Then, I'll just try to keep the jersey on at home if those events run and see what happens next." Makena Burke and Tiare Thompson put their names in the history books as the first women Finalists at Outer Banks since 2004. - WSL / John Ferguson

A bit of WSL QS history was made as Burke and Tiare Thompson made their way into the water after 14 years separated the last WRV Outer Banks Pro Finals from Sunday's and it was Burke who emerged victorious in her first-ever QS appearance.

It was a wave-for-wave battle from the start with the 15-year-old taking to her signature backhand attack and Thompson's powerful forehand, but Burke held the edge with an 11.76 heat total to start. However, Burke dropped the hammer with a near-perfect 9.17 to put Thompson in a combination situation needing two new scores to match the Ventura, California, native's 15.50 heat total before Burke sealed the victory with a 7.27 in the dying minutes.

"It's crazy and it hasn't even sunk in yet, it's amazing to win my first QS event," Burke said. "I knew after getting that 9-point I had a chance, but Tiare (Thompson) is such a good surfer so I never thought I had it in the bag. I just kept wanting to push my second score higher to make it unreachable for her. But, I'm just happy to get the win in the end. The tide was a huge factor and I just had my spots with both the high and low." Burke's backhand attack is already something to account for -- and she's just 15-years-old. - WSL / John Ferguson

Burke powered through her Round 3 heat win before taking on up-and-coming talent Brooke Young in the Semifinals and ultimately notching a flawless event performance of her own alongside Pulga. Now, the Ventura, California, native will prepare for her next QS event after tasting success and hopes for more.

"I can walk away with a lot of great things knowing it's my first QS and I've never done an event like this," Burke added. "I'm just really proud of that and to show my surfing, as well as just have fun. While my forehand can be pretty good, it's nothing compared to my backhand just growing up with right pointbreaks. I'm so excited for Pismo now that I have some confidence and can't wait to surf another event like this." The Floridian nearly made it atop the podium after his runner-up in Barbados last season, but fell short to Pulga. - WSL / John Ferguson

The Melbourne Beach, Florida, native's outstanding finals day run earned him a second QS Finals appearance, but just fell shy of the top podium once more. Robinson's newly found mindset continued to push him forward and cap off a great East Coast leg run. It was no easy task for the 20-year-old getting to the Final, overcoming the explosive surfing of Nolan Rapoza in the Semifinals after dealing with former WRV Outer Banks Pro Champion Michael Dunphy in the Quarters following his Round 4 win and nearly making it a perfect event himself.

"Last time I got here I know it wasn't going to be my last Final, I just wasn't sure when it'd happen so it feels really good," Robinson said. "I really want to get a win now after that tough loss. It was a big day and Dunphy is one of the East Coast's best, I've looked up to him and that was cool going blow-for-blow with him. I thought my first Final in Barbados may have been a fluke, but now I'm ready for more and I'll get set for the Costa Rica event after some time at home. Every event's different and you go into each one differently with your head space, but I'm feeling a lot more confident."

750 Points and Motivation for Thompson 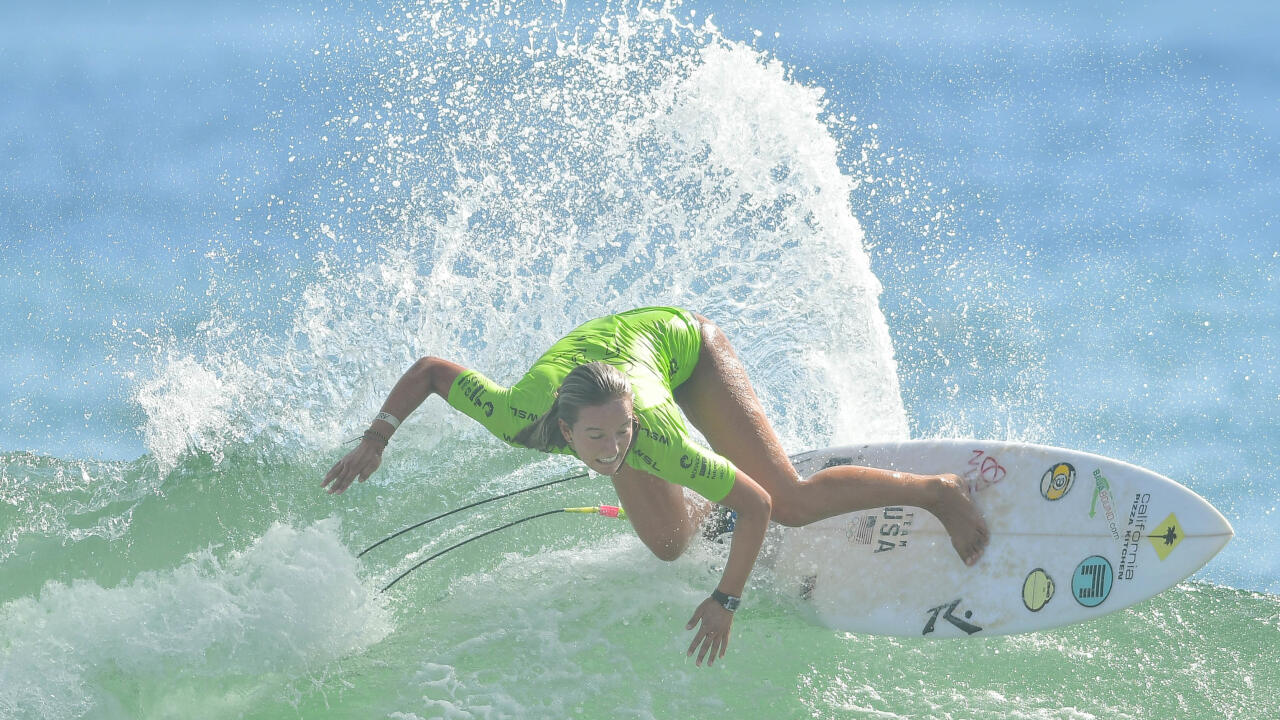 The Californian heads home with a renewed vigor and even more appetite to claim a win. - WSL / John Ferguson

Thompson looked to be at her best heading into the Final after a dominant Round 3 performance, overtaking Tanika Hoffmanbefore eliminating her in the following Semifinal. The La Jolla, California, native earned a near-perfect 9.00 of her own, along with a 16.27 heat total, before a battle with Hoffman. This marks the 17-year-old's best QS result and will take that moving forward as she now looks for more.

"I'm glad I made it all the way to the Finals since that was my goal for the weekend," Thompson said. "That 9-pointer I got earlier today felt amazing and just wish I could've done it in the Final. I felt like I had a lot of momentum going into it, but then couldn't find the wave so I'm stoked with second. I've learned a lot and I'll use that to my advantage in Pismo, go super ready, and I want to take the win at that one. This is a confidence booster and I'm excited for the next one."