Rain or shine, surfing goes on and persistent rainfall didn't stop competitors from shining at the Gotcha Ichinomiya Chiba Open on the second day of action. Both men and women got heats underway as women made their debut in terrific fashion while the first batch of top seeds emerged brilliantly in Round 2.

Though the women's field remains predominantly Japanese, all but one of the internationals in attendance were sent packing with overpowering showcases from Japan's upcoming threats. One of the women's hometown favorites Kana Nakashio setting the scale. - WSL / Kawana

Though the field remains predominantly Japanese, the few internationals in attendance were sent packing with brilliant showcases from Japan's upcoming threats.   Ichinomiya's own Kana Nakashio put on a clinic with her forehand attack and overcame current QS No. 7, fellow compatriot, Sara Wakita for a big Round 1 win. This marks Nakashio, only 15, first event of 2019 and the local made it count with fireworks to earn a day's best 14.37 (out of a possible 20) heat total. But, Nakashio knows the job is far from done.

"Having a competition at my home break is very rewarding for me," Nakashio noted after her win. "Lots of my local friends are expecting my surfing to be at a certain level and I'm glad I could do well. To win here early in the season and earn points for future QS overseas is my goal." 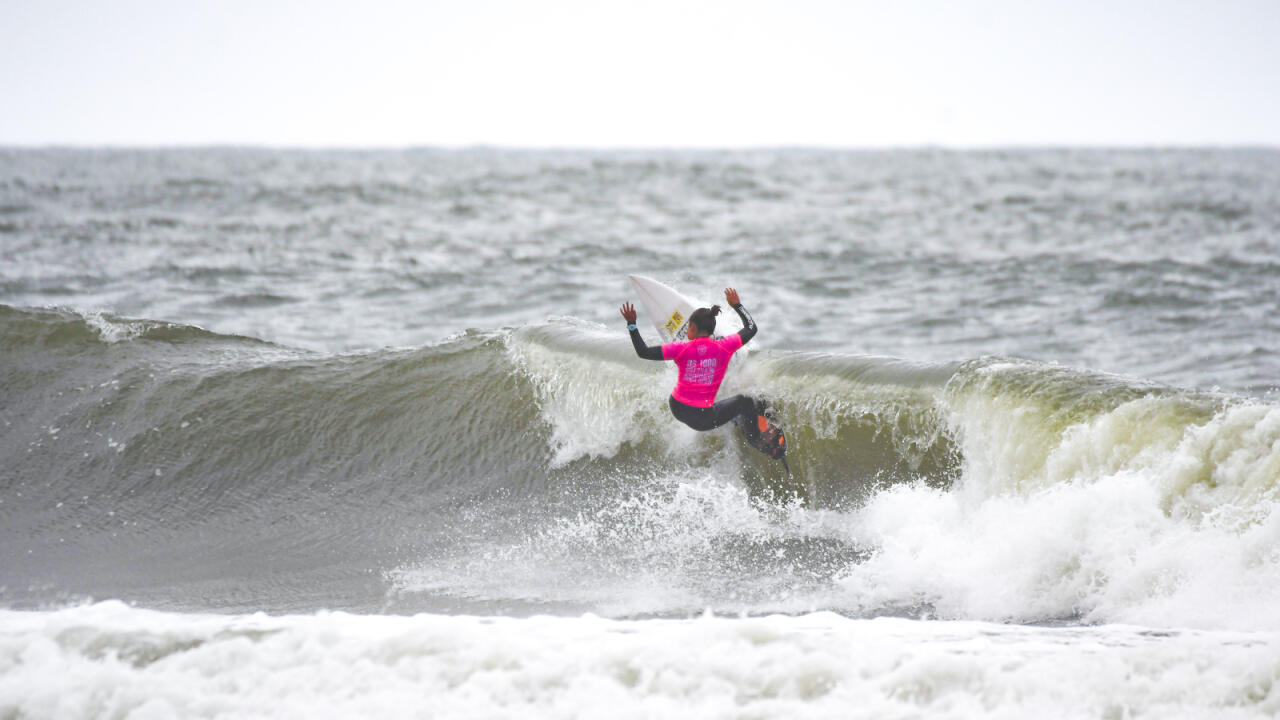 Fellow Ichinomiya local Minami Nonaka, 17, showcased her knowledge of the break in incredible form and posted the day's highest single-wave score of 7.40 (out of a possible 10). The 17-year-old currently sits at No. 49 after earning solid results during the Australian QS 6,000 leg and looks to continue that momentum at home.   "This is my home ground and it's great to have the local supporting me here where the Olympic games will be held," Nonaka said. "I'm hoping to try and compete overseas more this year as well as more here in Japan," Tszuki noted toward her season. "If you win in the first half of the season, it's very important because you earn points for the second half of the year and getting a good seed for the 6,000 and 10,000s." 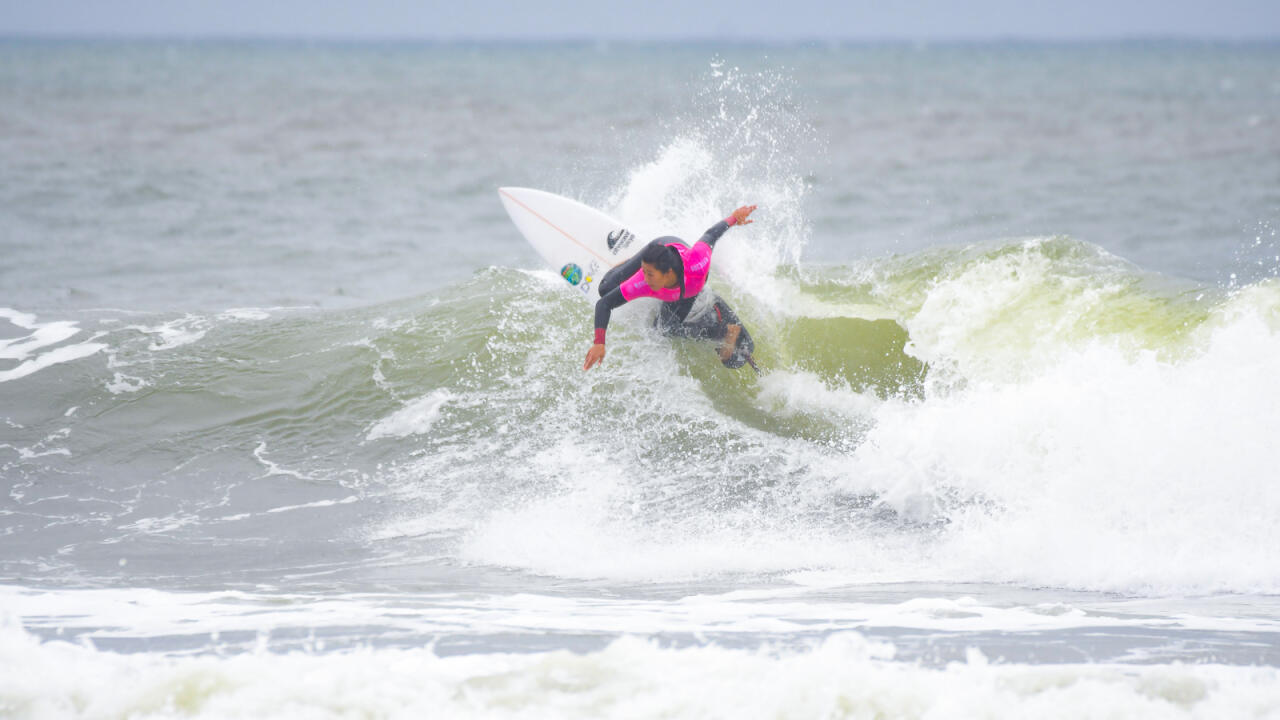 Mahina Maeda has come close to qualifying twice in the past and showed that experience. - WSL / Kawana

Oahu, Hawaii, raised and Japanese representative Mahina Maeda displayed plenty of variety on the multiple sections she was able to find amid the incoming tide. Maeda's come close to Championship Tour (CT) qualification multiple times - finishing 14th in 2018 - and boasts a World Junior Title, but still hunts the next big step in her career on various fronts with her vicious backhand and forehand attack.

"This event is pretty important, not necessarily the points, but gaining momentum and rhythm which is really important to me," Maeda said. "Especially since this is the event location for the Olympics I think it's key to get as much practice as you can. It also shows the home crowd, as well as the boys, that the girls do have the talent as well."

Ichinomiya resident Amuro Tsuzuki contested Nakashio for heat total of the day with a stunning 13.60 of her own and is joined in Round 2 by defending event winner Shino Matsuda among her fellow compatriots and Floridian Molly Kirk remains the sole international left to steal the win from native surfers.   Tomorrow's 6:30 a.m. JST call will determine a possible start to men's Round 2 Heat 9 or women's Round 2 Heat 1. Frenchman Jorgan Couzinet took control of the lineup with a decimating backhand attack to earn an excellent 8.00 (out of a possible 10) and cap off a momentum-building Round 2 heat win. Couzinet has tasted the bitterness of near-qualification the last two years and sits within in the Top 10 currently once more with his sights set on breaking through to the Championship Tour (CT) this season.

"Before the heat I saw some pretty great rights but unfortunately I couldn't find a proper one with three turns but luckily I still found a good score," Couzinet said. "This event is really important and I arrived a few days early because 6,000 points is great for my campaign. I really want to qualify so bad this year and hopefully I can make it." Hometown hero Reo Inaba comes into this event ranked No. 10 and can continue his charge toward CT qualification with a big result here. Inaba kept the likes of former World Junior Champion Finn McGill and QS veteran Tanner Hendrickson at bay en route to a solid win while showcasing his aerial attack.

"I've been practicing my frontside air and it felt psycho to be landing one in a heat," Inaba said. "Imaikalani, Keanu, and Josh Moniz are staying with me and everyone is surfing so good. I'm just hoping to keep getting good results this year and to do it here would be amazing." Barron Mamiya made his intentions clear earlier this season and is backing them up. - WSL / Kawana

One of the event's top seeds Barron Mamiya used the air wind to his advantage for massive air rotations and stomped one for a 7.67, but it was Japanese competitor Sasuke Kawatani who eliminated a top threat Joshua Moniz to notch another early upset.

"The lefts are super fun, they're cupping into you with a few little sections so I was happy to get a few and land some airs," Mamiya said. "I've got some magic boards under me right now and it's giving me some confidence to attack when I get the opportunity. I love Japan so far. The sushi is really good (laughs)."

Australian Noah Stocca found his way to a remarkable comeback, catapulting himself from third-place into the lead with his final wave after earning the heat's only excellent score minutes prior and dispatching high seed O'Neil Massin (PYF) for the day's first big surprise win.