Day 4 of the Krui Pro dawned and was welcomed with tropical rain and a new swell. The rain cleared quickly, exposing the clean and groomed 4 foot long running left-handers and the top seeded men's QS3,000 round was called on. Gabriel Medina, reigning two-time World Champion is a superstar no matter where he goes, even in the remote jungles of Sumatra he's constantly asked for selfies and signatures and he didn't disappoint his adoring fans today. Medina took off and launched right into a lofty air-reverse and nailed a couple of turns to lock in a 9.03 to the cheers of fans and fellow competitors on the shoreline. But the Champion had to settle for 2nd place as Jonathan Gonzalez stole the show with the best wave of the event so far.

"The waves went a bit slow in that heat, but I caught a couple fun ones," Medina said. "That wave that Jonathan (Gonzalez) got looked so nice, he surfed great. I really love Indonesia, the waves are incredible -- I surfed one of the best beach breaks ever just down the road yesterday. The people here are so nice, they have been great to me. I'm just having fun between CT's and this event was good opportunity to go somewhere new. Hopefully the surf is bigger and better tomorrow."

Jonathan Gonzalez, from the Canary Islands couldn't wipe the smile off his face after scoring the wave of the event so far and a heat win over Medina, Jack Robinson and Hiroya Miwa. Gonzalez took off near the top of the reed and pulled into a fast barrel, threaded two section and came out and uploaded some seriously sharp backhand turns to lock in a 9.17 out of a possible 10. "I've surfed against big names before like Mick Fanning and Joel Parkinson and I love it -- it makes you surf your best," Gonzalez said. "It was a slow heat for waves and everyone was sitting at the top of the point, I was so lucky to be in the spot for that wave, it let me in the barrel for a section and then opened up for a few turns. It's a great feeling."

Indonesia's Rio Waida posted an impressive win and was cheered on every turn by all the Indonesian surfing fans watching. Waida finished runner-up at this event last year and is hungry for another big result at this year's Krui Pro. 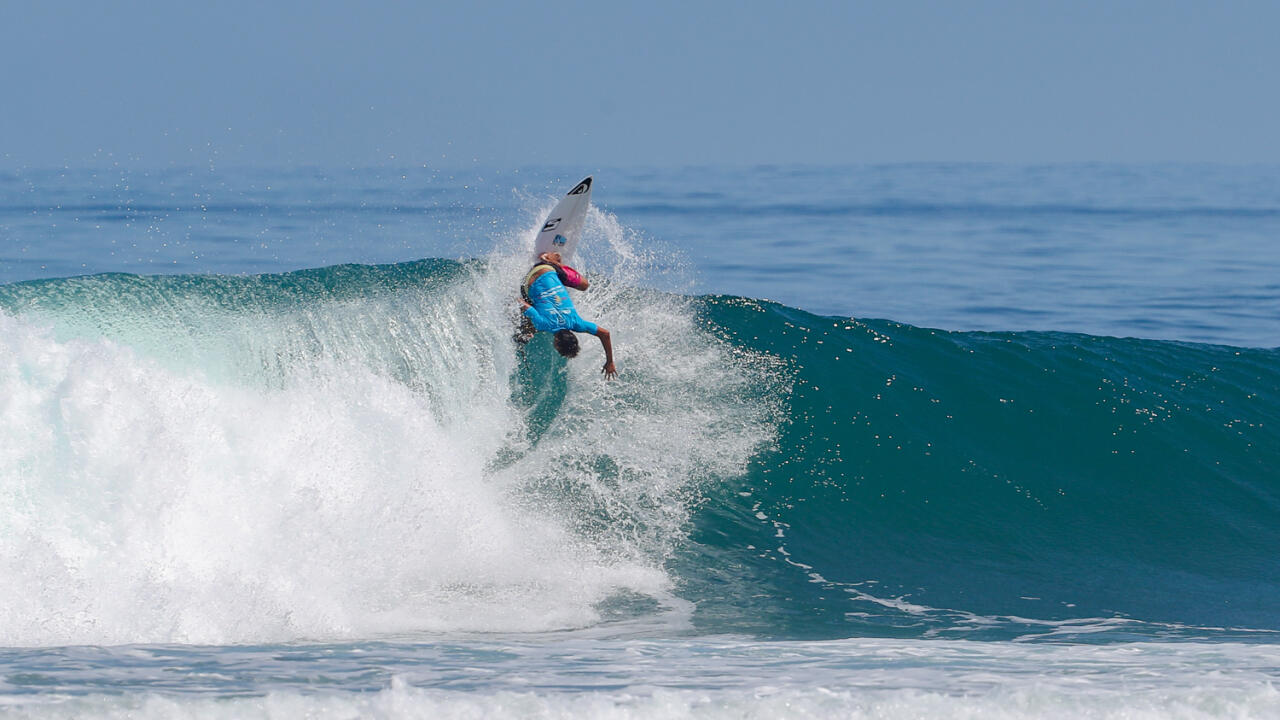 Rio Waida and the definition of 'in the pocket'. - WSL / Tim Hain

"I really love this wave and still have confidence from last year's result," Waida said. "It feels good to win a heat because there's so manly talented surfers in this round. Everyone is excited to have Gabriel Medina here, he's my favourite surfer, he inspires me to push myself harder."

Cole Houshmand from San Clemente, California took an impressive win in his first heat at the Krui Pro. Houshmand stylishly linked snaps and swooping carves to post two very good scores and advance to Round 4 alongside Japan's Kan Watanabe who finished 2nd, while Ryan Slattery and Jake Elkington were eliminated in 3rd and 4th place. "The first two waves I was just testing a few things and seeing what the judges were rewarding and after that I just went for it," Houshmand said. "This wave is so fun, I could surf it everyday. Any chance I can come to Indonesia and surf a perfect left -- I'm there. To have Gabriel Medina here is amazing, he's one of my favourite surfers and I've just been watching him surf and trying to take notes."

Powerful regular-footer Noe Mar McGonagle from Costa Rica used his backhand attack to stamp his authority on his heat, nailing a 7.40 and an 8.07 to easily advance into the next Round. He will match-up against Lucca Mesinas (PER), Kan Watanabe (JPN) and Thomas Debierre (FRA) in his next heat.

"I have a wave where I live in Costa Rica just like this -- so I feel super comfortable out there," McGonagle said. "I haven't gotten the results that I am looking for so far this year, I am hoping that at the Krui Pro I can get a solid result to fire up my year. The QS is tough sometimes, a lot of travel and everything, but having a wave like this is a dream." Mitch Coleborn was on point at Ujung Bocur this morning, locking in two 7-point-rides to claim an easy heat win in his first appearance at the 2019 Krui Pro. He will now face off against Nick Callister, Paul Cesar Distinguin and Gabriel Medina in the next round.

"The waves here are so good, not just this one but there's so many other waves around too -- I'm so glad I came here," Coleborn said. "I've only been able to surf this wave before the competition and at the end of each day, so that was my first time surfing on that tide, so I had to try and figure out the wave a little, but it all came together."