The beach break of Playa Revolcadero will play host to some of North America's finest Qualifying Series (QS) talents for the Vans Surf Open Acapulco QS 1,000 pres. by Corona beginning July 12 - 14. This will be a marquee event ahead of the Vans US Open of Surfing as it determines a trials position for a shot into the main event.

New Smyrna Beach, Florida's, Noah Schweizer currently holds that spot heading into Acapulco with a brilliant showing to start the season but has a crop of competitors right behind him that he must fend off this weekend. Here's a few hoping to overtake that No. 1 spot in North America along with a few spoilers in attendance: Colapinto, 17, is already beginning to prove himself around some of the world's heavier lineups such as Sunset Beach. - WSL / Mike Chlala

The younger of the Colapinto clan is making his way through the ranks during his last year as a Pro Junior and currently sits just inside the Top 100 following the Ballito Pro. The soon-to-be 18-year-old has already shown glimpses of his potential with searing power and continues to push his boundaries at different breaks around the world in preparation for his first full QS season in 2020.

Sitting just over 100 points back from Schweizer puts him in the best position to make a run toward passing the Floridian but will need to bring his full arsenal. Mel's prowess for cold water tube hunting will be traded for the warm waters of Acapulco in search of taking over the No. 1 spot for North America. - WSL / Nicolaz Diaz

The 20-year-old Santa Cruz, California, native joins Pittman in gaining ground on the QS, being just his second full season, and currently sits at No. 106 on the international rankings. Mel recently released a new edit from his journeys to Portugal and showcased the surface of what he's becoming capable of.

Now, the current North America No. 5 looks to find his first-ever finals appearance in hopes of making a surge toward the back-half of 2019.

A handful of surfers are just out of reach of putting their name in the mix, but just as capable of taking a big win and adding 1,000 points toward their campaign. Alan Cleland started off brilliantly at last year's event and looks for more this time around. - WSL / Andrew Nichols

A talented Mexican field is on hand once more and ready to vie for a shot at keeping the event title on home soil for the first time. They are led by former ISA Gold Medalist Jhony Corzo, who currently sits as the highest rated Mexican competitor on the QS, a prominent Pro Junior surfer Alan Cleland, and a plethora of others that include Dylan and Travis Taylor Southworth.

Each year a valiant run such as Corzo's Semifinal finish last year or Jafet Ramos' Quarterfinal appearance in 2017, but a Finals appearance has been hard to come by with the field on hand. 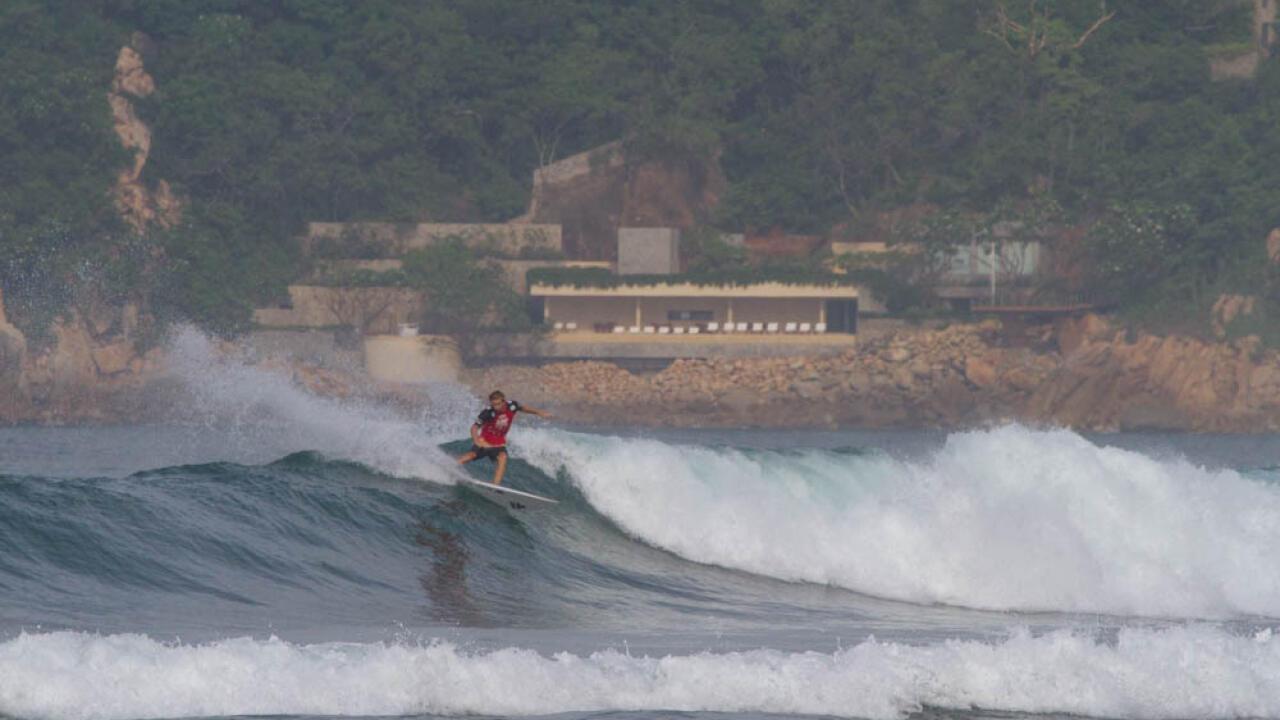 Kilian Garland makes his way to Playa Revolcadero's playful lineup for the first time since 2016. - WSL

Both Kilian Garland and Jordy Collins have garnered North America QS Regional Titles in 2016 and 2017, respectively, and now both are back in Acapulco for a shot at 1,000 points.

Garland makes his return to Playa Revolcadero for the first time since 2016 when he fell to Dylan Southworth before the Quarterfinals but still counted the result toward his eventual title. The 32-year-old doesn't find himself in to many QS events these days, but he's never one to turn a blind eye on. Collins has been putting in the time this year with an equal 13th his best result so far. - WSL / Damien Poullenot

For the 20-year-old Collins, it's been a busy start to the 2019 season after starting off strong in Israel before finding an unlucky run of results. The Carlsbad, California, native is looking to turn his year around with a great result in Acapulco and has been putting in the time away from the water as well to make it happen with his training regiment.

Finals day awaits the Semifinalists with implications for each of the remaining surfers at the Vans Surf Open Acapulco pres. by Corona.

The Vans Surf Open Acapulco by Corona QS 1,000 returns as a staple event in the 2019 schedule.