The Women's Qualifying Series' (QS) return to Jennette's Pier proved to be fireworks on finals day at the WRV Outer Banks Pro QS 1,000 presented by Sanuk with QS newcomers and experienced competitors taking over the lineup with two-to-three foot swell provided plenty of opportunity. In the end, it was Palm City, Florida's, Zoe Benedetto taking a historic win and replacing Makena Burke as the youngest winner at just 14.

A hard-fought day between event standouts led to a big Final between East and West Coast, but Benedetto reclaimed the title for her East Coast contingent.

Benedetto took over the title of youngest woman to win the WRV Outer Banks Pro over 16-year-old Ella McCaffray in stunning form. Benedetto's relentless forehand attack paved the way to a near-perfect 9.00, her second of the day, toward the end of their Final to solidify her maiden QS victory in her first-ever QS Final. The Palm City native overcame a pair of Hawaii standouts on the way to her first QS Final.

"It feels so good, I'm over the moon and just starstruck right now," Benedetto said. "I remember before the contest just thinking this would be a good birthday present and I just wanted to come into this wanting to get good experience. I've done a few QS's but to win feels so good with all the girls ripping, especially with a few big names and just to compete with them is great." 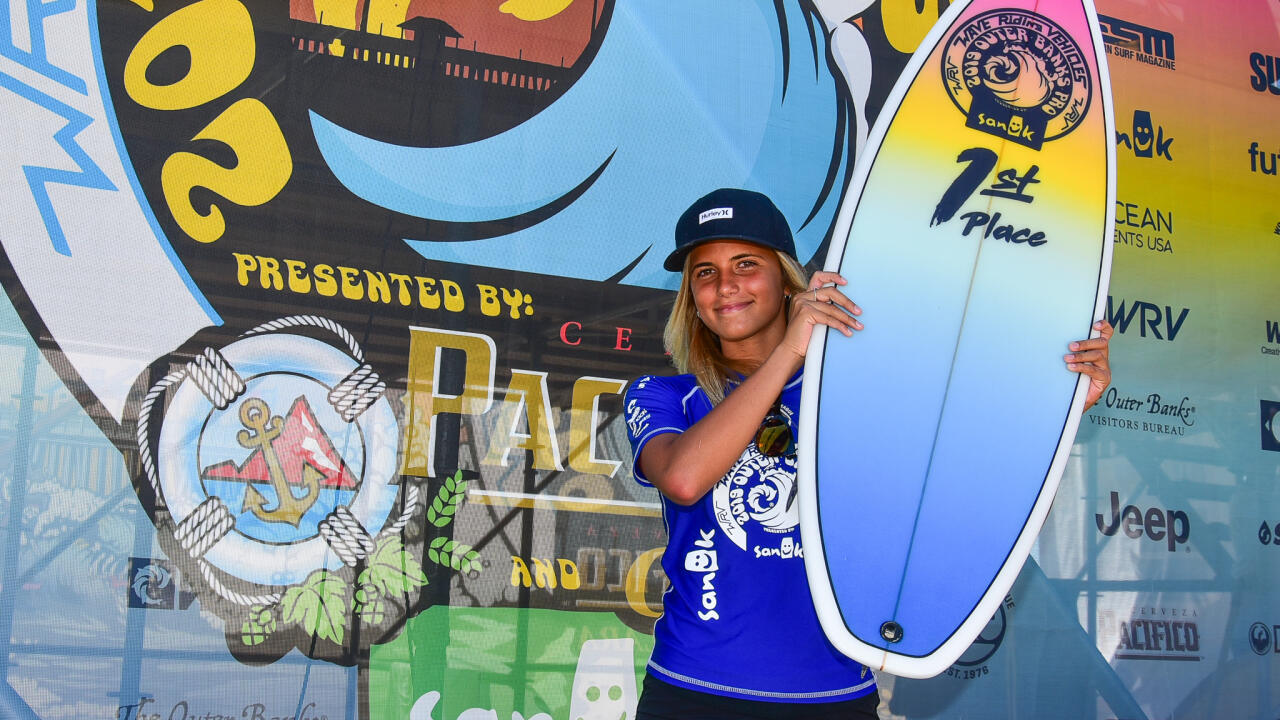 The newly emerging threat already proved herself at the Pro Junior level with a Finals appearance earlier this year. - WSL / John Ferguson

The 14-year-old had to overcome fellow up-and-comer Kailey Bogart on her last two waves, scoring a 12.93 heat total, before a marquee Semifinal matchup against event standout Luana Silva where she first posted a 9.00 to clinch a victory.

But, now the Floridians have to head home quickly ahead of Hurricane Dorian that looks to be heading their way before thoughts of enjoying the victory can settle in.

"I don't know what the future holds, I'd love to do more competitions and I'm trying to do as many QS's and Junior Pros as possible so if the RVCA Pro Junior is on the list I want to do it," Benedetto added. "But right now I just have to get home with a huge hurricane to deal with (laughs)."

McCaffray Soaks In A Career-Best Result McCaffray battled her way through a stout Quarterfinal against East Coast Kayla Durden before meeting one of the event favorites Chelsea Roett in the Semifinals and excelled on both occasions. The San Diego, California native showed her poise against the seasoned QS competitors and kept her strategy intact throughout finals day ultimately leading to a runner-up behind a dominant Benedetto.

"My goal coming here was a Semifinal so I'm really stoked to have made that Final," McCaffray said. "The waves here were so fun after I expected it to be flat (laughs). I was leaning more on my forehand in that Final after my backhand didn't feel strong in the Quarters or Semifinals so I'm happy to be able to showcase my surfing in fun waves. I'll focus more on the Pro Juniors and do some QS events when I can but I'll take this confidence back to those events."

Noteworthy Finishes For Roett and Silva QS veteran Roett made a solid charge toward her Semifinal appearance after dealing with event standout Serena Nava in the Quarterfinals, but couldn't carry that momentum against an in-form McCaffray. The 560 points accrued mark the best of Roett's 2019 season so far and moved her 39 spots to No. 128 on the rankings to kick off the back-half of the year. On the other side of the spectrum, Silva is just getting her young career started and put on a showcase of stunning performances -- posting one of opening day's highest heat totals in Round 1 with a 15.23. The Hawaii competitor hasn't ventured outside of her island's events on the QS until the WRV Outer Banks Pro and notched a result to hold onto, moving her to No. 158. Silva will now get ready for a busy Fall of events in the Pro Junior series where she looks to jump into the Top 2 for a shot at World Junior Championships.