Editors note: Welcome to our series of stories about women who are carving out their own spaces in the surf industry. Follow along as we get to know these creative women and the joyful, useful products they build.

Sitting in class in high school, Christine Brailsford Caro used to doodle surfboards in the margins of her notebooks. After school, she wandered the stacks of vintage boards at the Longboard Grotto in Leucadia, California. Intrigued by their possibilities, she wondered how they might surf and imagined riding each one.

These days when Caro wants to know how a board surfs, she goes into the shaping room and builds it. Since 2012, she has hand-shaped surfboards under her Furrow Surf Craft label in Encinitas. Caro makes an eclectic collection of boards, and she absorbs design ideas from a variety of sources - from vintage boards to films to her own experiences as a surfer and shaper. "I get inspired by the things I see," she says. "I want a certain type of feeling or movement of surfing and I create around that."

From an early age, Caro loved art, especially working in sculpture, wood carving, and ceramics. She attended Laguna College of Art and Design where she received her degree in illustration in 2008. Caro continues to work in sculpture and wood carving, and she is drawing a children's book. She believes her art training has provided an essential foundation for her shaping.

"You just have to learn the tools, so you can create what you want, right?" she says. "I have a steady hand, which helps, and then just being able to visualize a surfboard. I think of my surfboards as an art form." 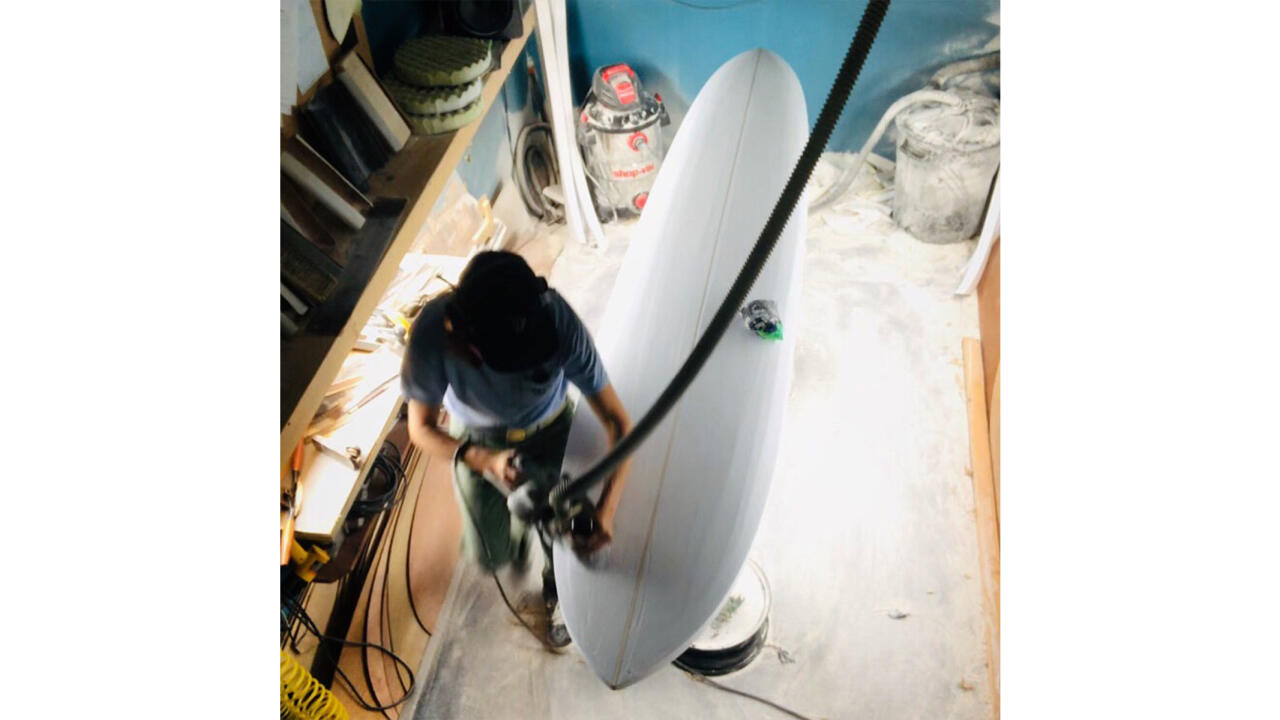 Caro in the shaping bay, bringing one of her many board designs to life. - Christine Caro

As she took her first steps toward shaping, Caro carved paipos from plywood. The bellyboards are fast and cheap to make. "I could change the design in the morning, and ride it in the afternoon," she says. Caro grew enamored of riding her own equipment and the creative process of refining her design ideas. Making a surfboard remained her dream, postponed by the cost of materials.

That changed when a friend suggested a trade. She would buy the ingredients, if Caro would turn them into a surfboard. Her then-boyfriend Manny Caro, who owns Mandala Surfboards, lent her his shaping room and she built her first board, a 6'0" stubby design. Already hooked, Caro immediately made a board for herself, a 5'9" from a similar template with a glass-on fin.

"I got really lucky," she says. "I think it was like board number five, when someone I didn't know, contacted me and wanted me to make them a custom. I guess it was just organic from there." 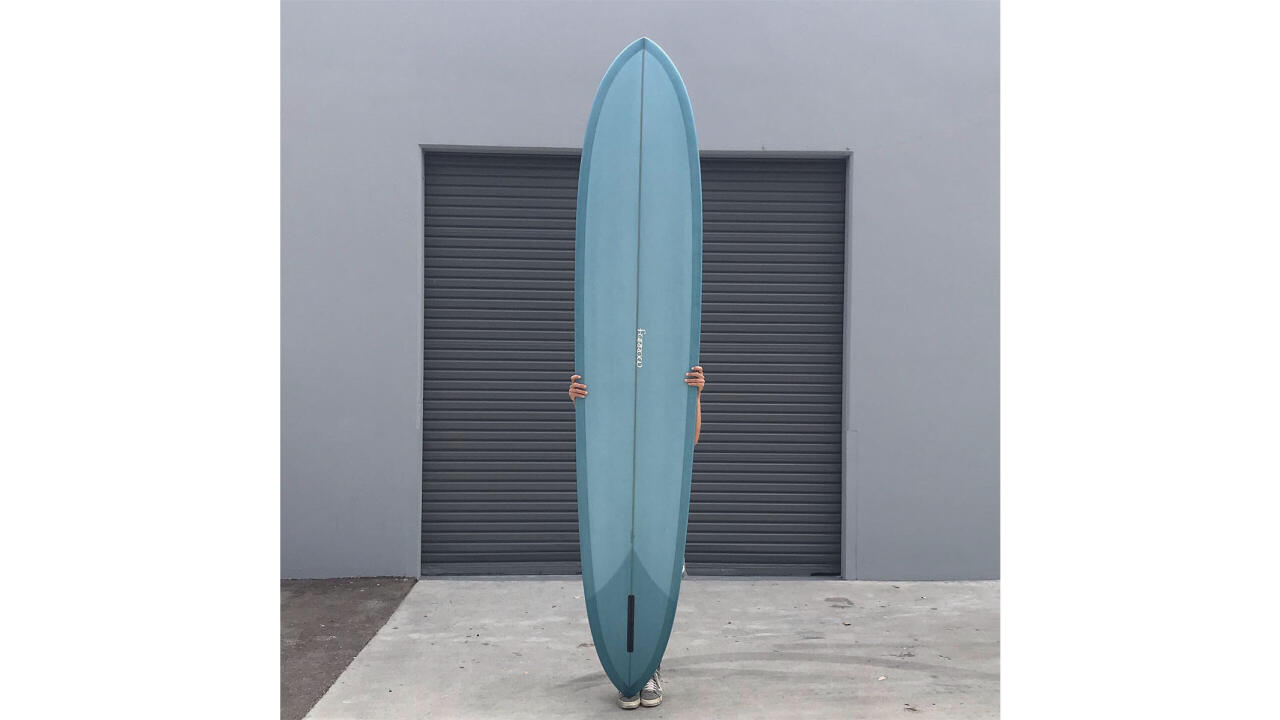 When she designs her boards, Caro draws inspiration from the Shortboard Revolution, a wildly experimental period in surfboard design. Beginning in the late 1960s, surfers made a radical shift from traditional longboards to faster, more maneuverable craft. Boards became shorter and shapers tinkered with bottom designs, rethinking foils, rockers, and rails.

But Caro doesn't simply copy boards from this era. Instead, she brings her own interpretation and insights as a surfer and shaper to her boards. Watching Paul Witzig's classic film Evolution, for example, led her to experiment with a wide-point back template.

"Wayne Lynch, the way he surfs in that movie, I think it's amazing," she says. "I wanted to create a board that had that similar flow and feeling."

While working at a shop, Caro had a chance to see a few of Lynch's boards. That intensified her curiosity about how the shape would ride. She drew a template with its wide point behind center and headed to the shaping room.

After riding that first board, Caro tinkered with the outline, rocker curves, and thickness. The process unfolds as a conversation between Lynch's original and Caro's own experience and creativity. She describes the resulting board, her Labyrinth, a single fin double ender, as a "maze of possibilities."

"I just kept developing it, because I was really stoked on the first one I made," she says.

When a farmer prepares a field, she ploughs a furrow in the ground. Into the furrow, she places the seeds that with time, weather, and care will grow into her harvest. The furrow is the starting point.

A visual artist, Caro shies away from literal explanations. "If you have to be told how to interpret a painting, you don't get to ask yourself what it is or ask yourself how you feel with it," she says. She views her surfboards in much the same way. The board is the starting point. 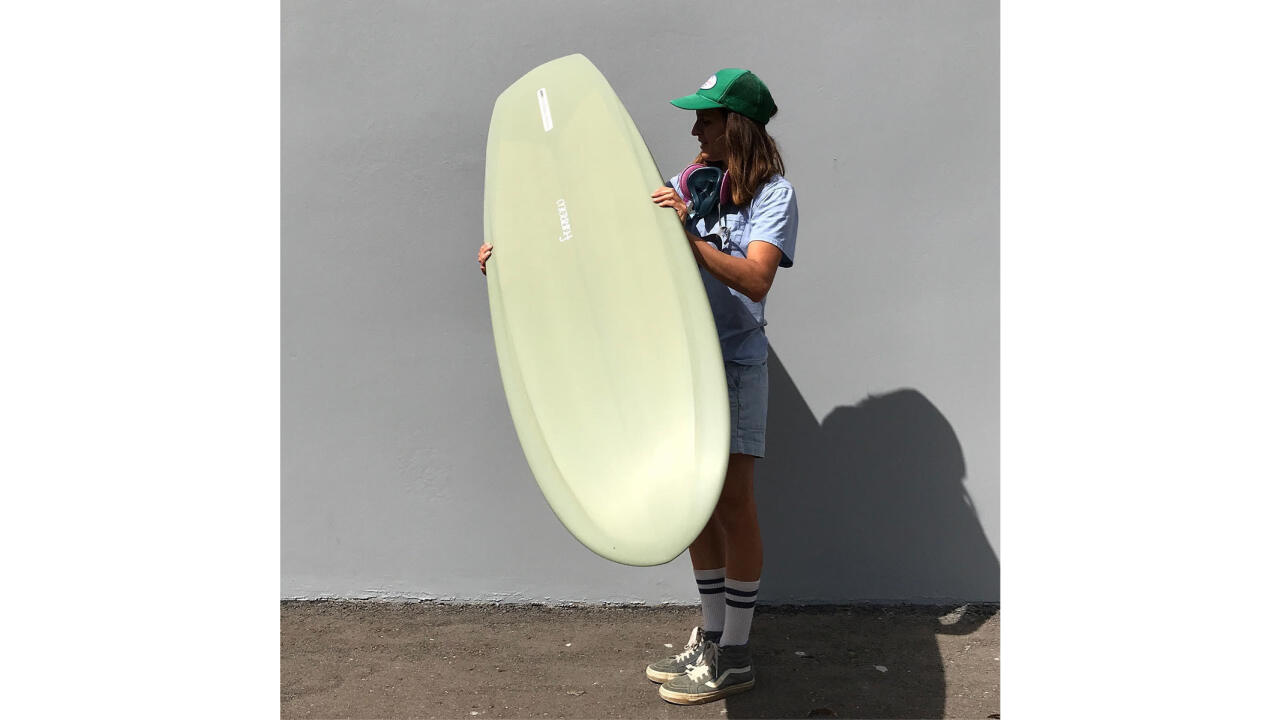 "When you have a surfboard and you have a good experience with that board - whether it's a wave or the company or just a feeling - you have that memory, it's almost like a photograph of that time," she says. "That's what surfboards are to me."

When she began shaping, Caro wondered if she was following the right path. After all Manny, now her husband, makes beautiful boards that she could ride. But she knows now that she thrives in the creative space the shaping room offers.