Legendary surfers Tom Curren and Mark Occhilupo will face off once again at the world-class righthander of Jeffreys Bay. The first installment of the ASP Heritage Series will run in conjunction with the J-Bay Open, Stop No. 6 of 11 on the 2014 Samsung Galaxy ASP World Championship Tour (WCT), which is currently hosting the world's best surfers this week in their return to South Africa and the hunt for the world surfing crown. The ASP Heritage Series is designed to celebrate and honor the foundational contributors to the sport of surfing -- athletes, venues, happenings and culture --by showcasing rematches between iconic surfers, video profiles and sporting history, and engaging fans, both current and new, across a variety of platforms.

Iconic surfing is deeply rooted in Jeffreys Bay: It's a featured destination in a number of surfing films, including the critically acclaimed The Endless Summer, in addition to being a contest site that's seen huge rivalries go head to head. J-Bay is an ideal spot to kick off the series and two equally ideal surfers have been chosen to square of in a single heat of competition set against the idyllic Jeffreys Bay lineup. "When you think of modern surfing, you'd be hard-pressed to find two surfers who have had more of an impact than Tom Curren and Mark Occhilupo," said ASP Commissioner Kieren Perrow. "The ASP Heritage Series is a great initiative to honor and celebrate professional surfing's pioneers and icons and tie the sport firmly to its foundations. We're all very excited to have Tom and Mark here in South Africa and very much looking forward to seeing them surf."

Curren, from California's Santa Barbara, rose to prominence in the 1980s and 1990s utilizing a pointbreak-honed style on the international stage and collecting three ASP World Titles (1985, 1986, 1990). Universally regarded as one of the most stylish surfers ever to step foot on board, Curren's impact on the sport of surfing, both in and out of the competition jersey, cannot be overstated. Curren was also featured in the late Sonny Miller's Searching series, highlighting his style and prowess on the contest site currently hosting the Top 34. 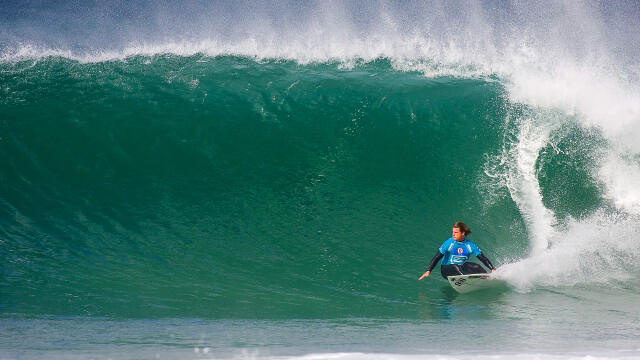 "J-Bay has been pretty important to both our careers, mine from the Search films and Mark from competition," Curren said. "It's fantastic to be back here and I'm excited about having a heat out there with Occ. Hopefully the waves pump for everyone this week."

Occhilupo, originally from the Sydney suburb of Kurnel, soon advanced to the surfing center of Cronulla before exploding onto the national scene as a prodigious teenager. The "Raging Bull's" full-speed approach and unparalleled power proved revolutionary in the goofy-footer's rise up the international rankings. At 18 years young, Occhilupo redefined backhand surfing at Jeffreys Bay, claiming the Country Feeling Classic in 1984. The following two decades would see a dizzying rise and fall for the passionate Australian before he mounted one of the more impressive comebacks in sports history, claiming the ASP World Title in 1999. "It's a very special thing to be back here in South Africa and preparing for another match with Tom," Occhilupo said. "From Bells Beach to Huntington Beach and certainly Jeffreys Bay, Tom and I have had a very fun and colorful history in competition with one another. To be honest, it's just a real honor that the ASP and the world's best surfers would have us here in this fashion. It's very humbling and I hope we can put on a good show for everyone."

The first installment of the ASP Heritage Series can run as early as July 12, 2014, but will have opportunity to run at any point during the competition window. The J-Bay Open will be held from Thursday, July 10, to Monday, July 21, 2014 and will be webcast LIVE here on http://www.aspworldtour.com.

Soak up all the action from the epic swell during July's J-Bay Open, and the Top 34's battle to rule Supertubes.

Get a taste of the South African band's song from the 2014 J-Bay Open.

South African rapper jack Parow throws down in a perfect song for summer.

The J-Bay Open has come and gone, but the music plays on with songs from the event.