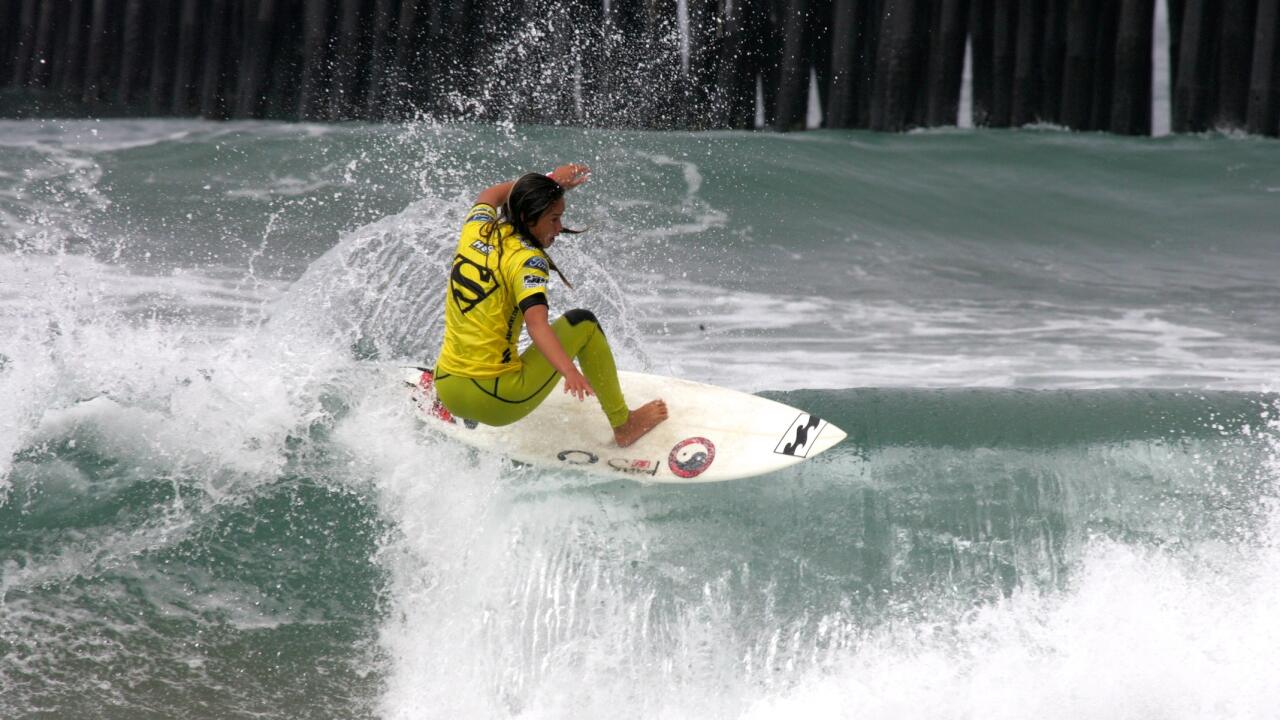 Alessa Quizon marched to a Semifinals finish in Oceanside California, helping her qualification cause. - WSL

OAHU, Hawaii (Friday, November 21, 2013) â€“ Alessa Quizon, (HAW) 19, is one of four rookies who will join the ASP Women's World Championship Tour (WCT) for 2014. After an ankle injury derailed her qualification hopes last season, the goofy-footer hailing from Oahu's West Side dismantled the Qualifying Series in 2013 as one of the most consistent athletes, finishing the year off ranked No. 4 and well within the cutoff to join next season's elite.

While qualifying for the WCT may take years for some of the finest talent, Quizon made short work of the QS, finding her way atop the rankings after two seasons on the international circuit. Following a successful 2013 campaign, Quizon is entering her rookie year ready to take on the world's best.

â€œI feel really good and more confident in myself based on my results this year,â€ Quizon said. â€œDuring my first attempt on trying to qualify, it was a bit of a struggle for me and basically the change I needed to go through to do as well as I had done this year. My first year on the QS I could only get in to a few of the events toward the end of the season because I had no points. Then, when I got my chance to compete, I had sprained my left ankle during the event in Peru. I was so devastated during the time I had to heal because I wasn't able to surf to the best of my potential and my chances on qualifying on my first year were highly unlikely. When time had healed my ankle I then realized that I have to surf smarter and work even harder to prevent anything else from holding me back. I had to let myself have a better, smarter and more positive perspective on things. Then this year came around and everything sort of fell in to place.â€

2014 will represent Quizon's first season as an official member of the ASP Top 17, but she's already proven to be a dangerous wildcard in Brazil. Quizon's top result includes a Semifinals finish at the Billabong Rio Pro and her early success could be a sign of things to come as she embarks on her maiden ASP Women's World Title campaign.

â€œGetting a result in Brazil definitely gave me more of a confidence boost and having had that opportunity to compete in Rio helped me gain a lot of experience at competing on a World Tour level. I had learned so much during that event and with the result I ended up with, I had proven to myself that, yes, I do have what it takes to compete as a World Tour surfer.â€

Quizon's taste of success on the elite stage has left her hungry to post big results in 2014 while competing at new venues around the globe.

â€œMy goals for the next season are to train and surf to the best that I can, be consistent and have the most positive state of mind through every event and hopefully win one. I want to showcase to myself that I belong here on the Top 17. I also want to enjoy and have fun competing and traveling with the girls and I'm also really excited for Lowers! I had moved to San Clemente this year and spent a lot of time getting to know the place. Lowers is such a fun high performance wave that gives you the option to go left or right. It's perfect for the women to compete in.â€

While Quizon may be emerging as a new face on the international scene, her success comes as no surprise. Quizon was born and bred at Makaha Beach, and with local West Side talent including the likes of 2000 ASP World Champion Sunny Carcia, past Women's CT standout Melanie Bartels, ASP World Longboarding Champion Duane DeSoto and Hawaiian icon Rell Sunn, this corner of Oahu has given Quizon both a world-class training ground and an impressive list of talent as inspiration. In addition to the local contingent, Quizon's draws inspiration from her competition.

â€œI would have to say pretty much all the girls that I have competed with have inspired me. It's great to see that we can push each other to the next level to do better and perform to the best we can. Surfing alongside girls like Carissa Moore has taught me to become a better competitor.â€

Quizon's emergence on to the elite ranks marks her as one of five Hawaiians on the ASP Women's WCT. While a rookie season for any competitor can be intimidating, Quizon's Hawaiian contingent will give her a sense of home on the road.

â€œHaving the other Hawaiian girls on tour will definitely make me feel more comfortable at new events. We all grew up surfing and competing with one another and it's a good thing to see more then a familiar face around while traveling.â€

- WSL / Cait Miers
Saturday, May 15, 2021
Jordy Smith Fires Out Of The Gate With A Dominant Performance