Italian born, Maui-raised big-wave surfer Francisco Porcella is having a breakout year. The winter season isn't even over yet, and Porcella has submitted entries to the WSL Big Wave Awards across four different categories. After moving to Maui's North Shore from Sardinia at the age of 13, he caught the big-wave bug during the tow-in era, then started paddling in with the Brazilian crew out at Pe'ahi. But after having a front row seat for the seminal session at Jaws in March 2011 -- a session that was dominated by Shane Dorian and the late Sion Milosky, and which was credited with a so-called "re-birth" of paddle-in big-wave surfing -- he became a true Jaws junkie (even spending a couple years living on Pe'ahi Road). More recently, he's fully committed to pushing the boundaries of big wave surfing from both schools of thought, although paddle-in is his priority. "It's all about the west bowl out at Jaws, pulling into a huge pit and getting spit out, that's the dream," he said. We caught up with the 30-year-old goofyfooter while he was shacked up at the Porcella family home in Cagliari, Sardinia, visiting his sister between big wave strike missions.

WSL: So, you've had a pretty good winter.
Francisco Porcella: Chasing swells, it's what I love to do. It all started in Fiji last May and then West Oz, then we went to Chile and then Nazaré, and after that, Mavs. It's been a good winter, I'm stoked, but we've had some heavy moments, too. We've handled it well and it's all about teamwork and training, being fit and having a healthy lifestyle. That's what it takes to be ready and charge.

Speaking of charging, can you tell me about the session at Nazaré back in February where they filmed the wave of yours that was all over the Internet and the news?
That session… Well, two days before it happened I was in Hawaii and I heard about that huge swell. So, I made a couple of calls and got over there. I was with Axi Muniain and we got out there super early in the morning and it was just us. There were a couple other crews, Garrett [McNamara] and Andrew [Cotton], getting organized in the harbor. It was a little bit stormy, and we were out there just contemplating it, and we had our spotters on walkies up on the cliff. 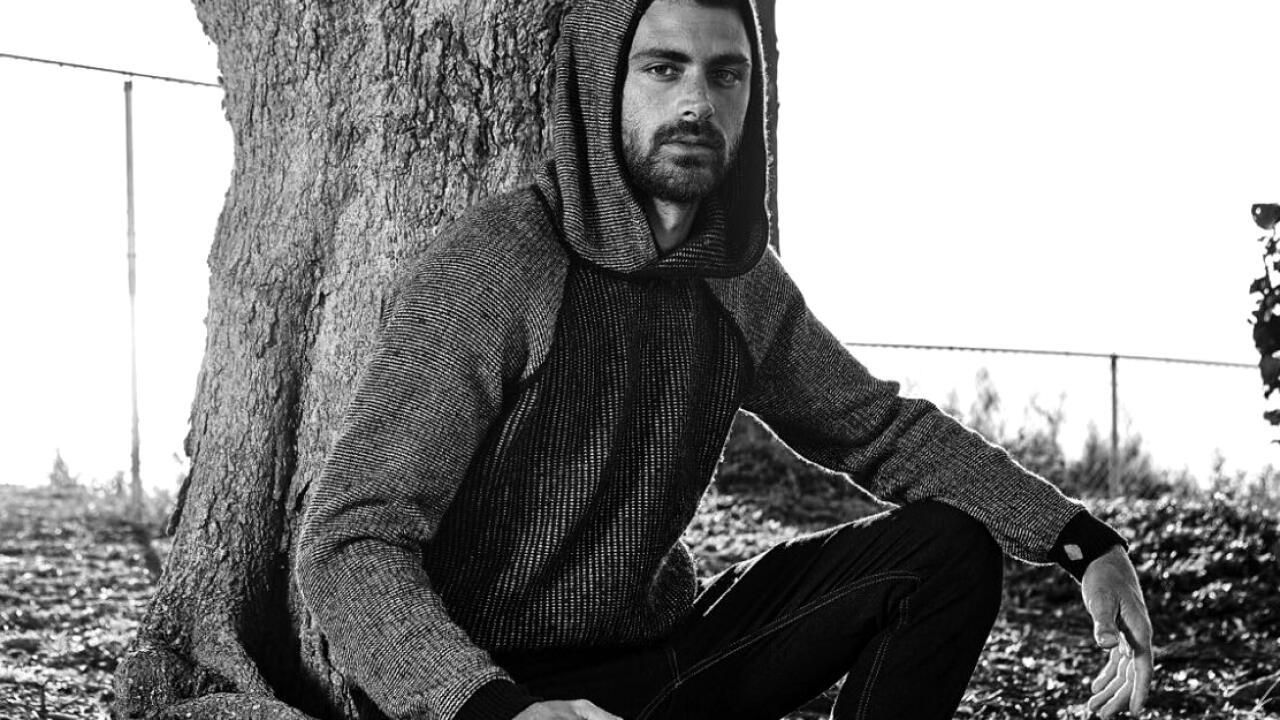 Porcella moved from Sardinia to Maui at age 13. Now he flies the flag for both Hawaii and Italy. Give him a follow on Instagram @franciscoporcella. - WSL

So we were waiting and it started cleaning up, then Ross Clarke-Jones and Rafael Tapia were ready and we were like, 'We're ready if you guys are down to go, but we're not going to try to catch waves by ourselves with no one else out here.' You want at least two teams to be safe, you know. So they come out and we started towing and getting some huge waves way outside, they were like big mountains and you were just riding down the things forever, but it was crumbly and messy. Then it started to clean up and I put Axi into a nice clean one.

Axi actually caught a good one before your wave?
Yep, then we switched and I wanted one so badly. We saw it, and then the spotters said there was a bomb and we headed in a bit and lined it up. In the video you can see Sebastian [Steudtner] and Eric Rebiere looping in from the inside but by that time I had already let go of the rope. I remember the wave shifting and I had to take a sideways line across it because I didn't want to be too deep. Then, sure enough, I see the side of the peak kind of pinching and I'm just trying to take the right line, staying on that line. I should have kicked out earlier, but I rode it out towards the end and did like a front flip flyaway. But then I pop up and Axi's not there to pick me up… 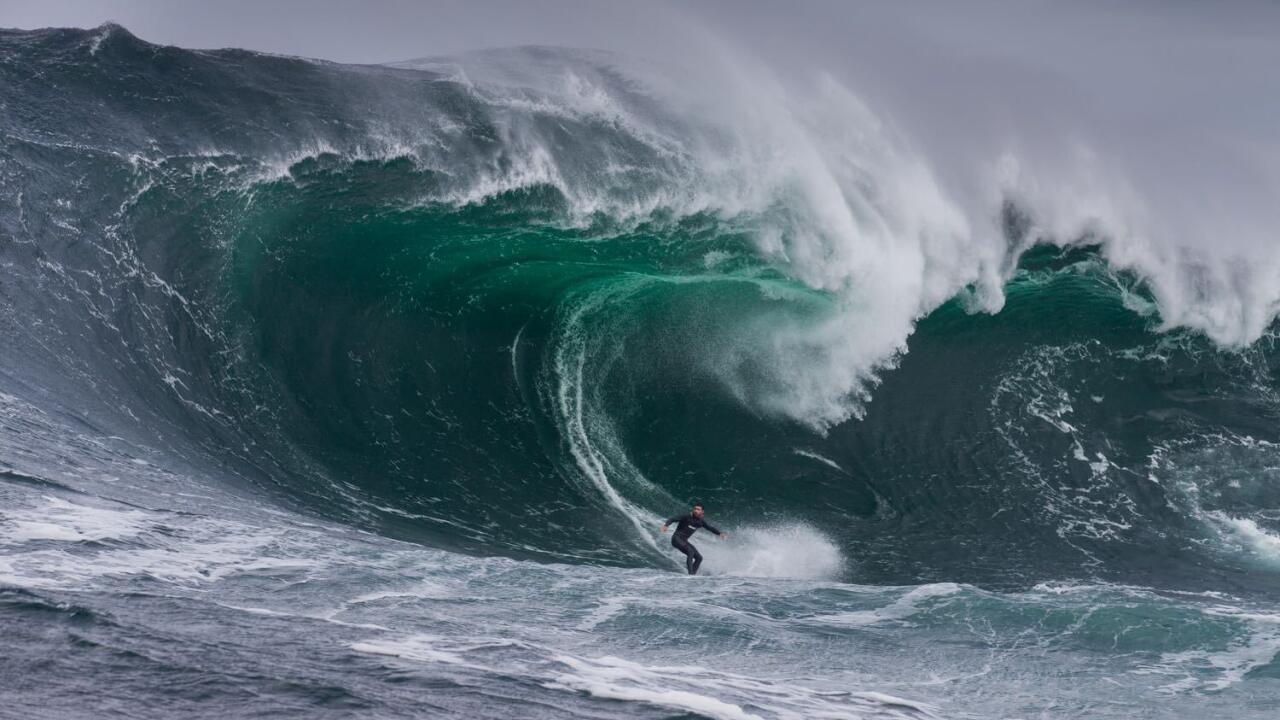 Tackling a wicked beast at The Right in West Australia. - WSL / Ryan Robson

That's the scariest part about that place, right?
Exactly, I took the first one on the head and then after the next one, even with my safety vest inflated, the swirling of the ocean there just sucked me back down. It was just sucking me down, down, down, and I was trying to swim up but I kept going deeper. So I just sort of let it take me.

Then all of sudden I'm swimming up again and after getting rolled by the third one Axi was there to pick me up. It was pretty heavy. I was ready, but the currents in the water there are crazy. It's kinda shorebreaky, but it's deep in some places, too. It's a crazy place. It throws you around, but if you were to get the right line you could get barreled, you could pack a big one if you got lucky. A single frame from the Ride of The Year entry. - WSL / Aleixo

When you see the footage of a wave like that afterwards, how does it relate to what you were thinking about it before you saw the footage?
It's funny you say that, because after we got back to the harbor I was trying to keep that idea in mind, what I saw going down that wave, because it's a totally different view and feel than what you see in the video. If you see something right away it kind of takes away from what the moment was. But it is cool to see what was happening behind me. I definitely took a safe line, but there's a big avalanche that falls behind me. I'm stoked, I think I might have a shot at Biggest Wave. 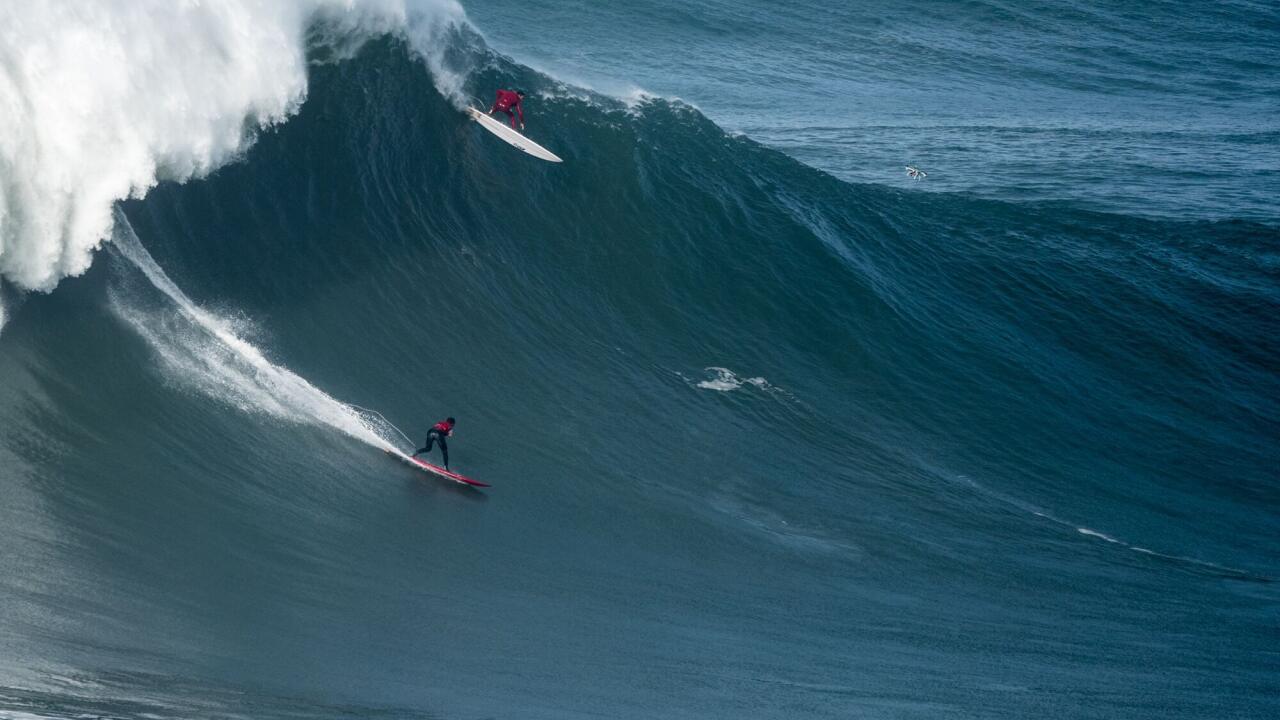 Airdropping in front of Lucas Chianca at Nazaré. - WSL / Aleixo

Shifting gears, but staying in Portugal, there's an amazing photo of you air-dropping in front of Lucas "Chumbo" Chianca from a paddle session at Nazaré.
Oh man, that was nuts. Some waves there will stack up and throw and you gotta get under it, but there's a point where you're just too committed to pull back. I didn't even see Lucas until I was air-dropping, and I was like 'Oh no, I gotta stick this!'

I learned some lessons from that session about having a heavier board for sure. Sometimes you're there and it's really concentrated and it's ‘go time,' you're just going and it's hard to stop yourself. I felt bad for ruining his wave. It's cool though, we push each other. Lucas catches a lot of waves, so we push each other, but we're in control. 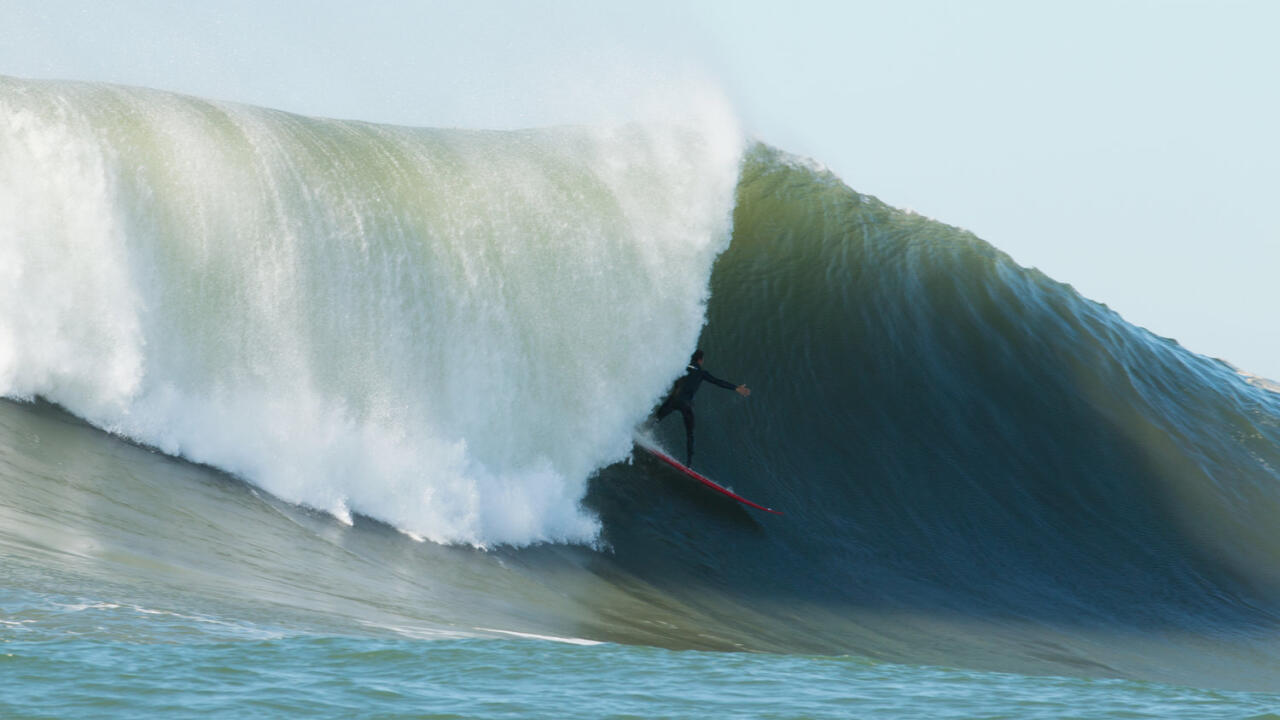 We also have some good shots of you knifing into the left at Maverick's. That was an interesting session you had out there, wasn't it?
That was a special day. I was with Tyler Larronde and Bradley Norris and I did get a couple good lefts with some nice views. I got three or four rights, but everyone wants to talk about the butt board wave! Sometimes at Mavs it comes from deep and really hits the bowl and stands up.

On that one, everyone was outside and sort of missed it and I just told myself I was going. Taking off I was in the lip still holding on and then it went beyond vert. Then I was holding on and stuck it, and then as I stuck the landing my back foot slipped. Then my foot was in the water and I went into survival mode and landed on my ass on the inside rail. As soon as I was sitting on my ass on the inside rail I grabbed the rail with my other hand and started claiming it.

Is it weird that everyone wants to talk about that particular ride, even though you got a bunch of really good waves that day?
For me it was just a really fun ride! I was in the recliner chair trying to ride it out as far as I could and everyone was hooting, it was the funniest moment. That wave just brings out that feeling of why we all surf. It's both ends of the spectrum, it's heavy and critical, but still just this feeling of stoke. It's a ride of a lifetime. I don't think I could ever pull that off again, it was a lucky moment. 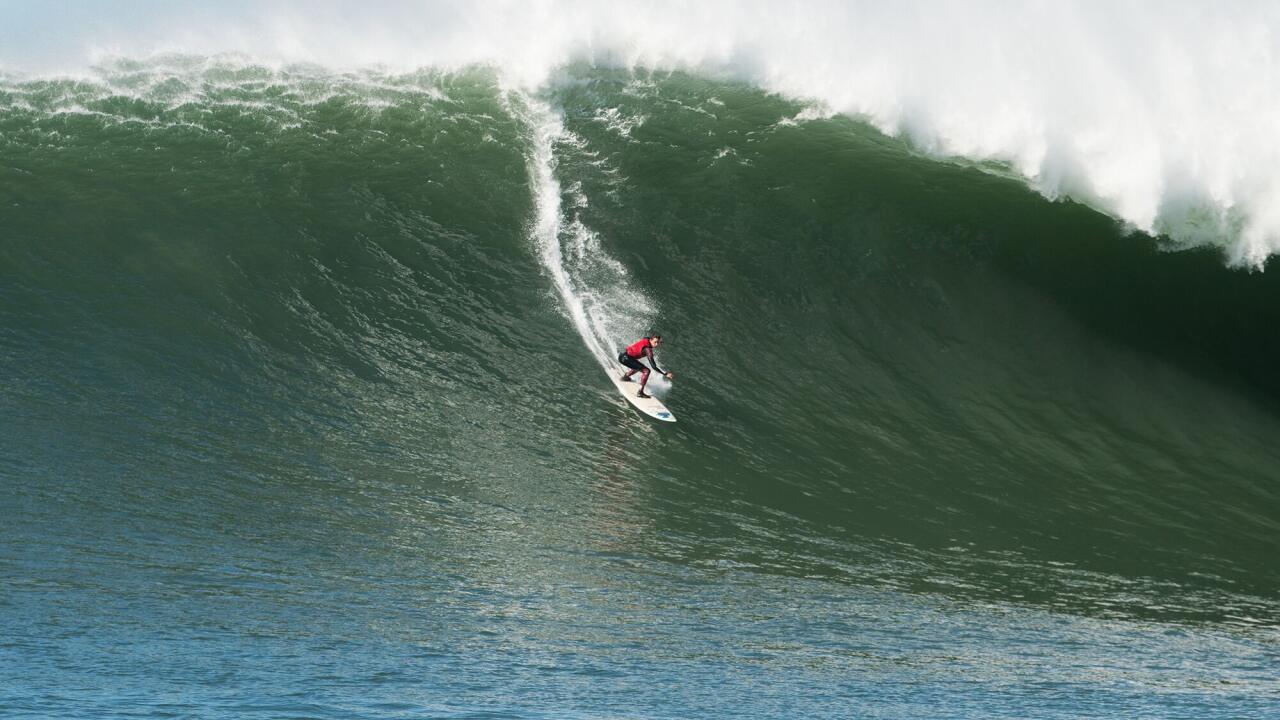 Not the wave at Mavs everyone else wants to talk about, but definitely worthy of a Big Wave Awards entry. - WSL / Bala

It hasn't just been a good your for you, it's been a good year for Italy, too.
You know, I am a Maui boy, but with the WSL we're representing all different countries all over the globe, and I can represent Italy and Sardinia and it's in my heart. I'm so stoked to see Leonardo [Fioravanti] on the Championship Tour now representing Italy. And then when I'm on the Big Wave Tour we'll have the Italian contingent running hot. It's just so cool for us, we're proud to represent Italy.

Forza Italia
6:13
The first Italian ever to join the Championship Tour has all the makings of a contender.