We're proud to share the stories of these outstanding women who have broken down barriers to shape a new norm. Pioneering a sport is never easy, and in 2004 Sofia Mulanovich became the first South American to ever win a World Title. When Sofía Mulánovich ascended the podium in Haleiwa to celebrate her first World Championship victory in December 2004, she'd traveled a long way from her childhood in Playa Hermosa, Peru. Sponsored by Roxy and congratulated by one of her childhood idols, Lisa Andersen, Mulanovich stood for a moment at the center of professional surfing. She'd made it. Her dream had come true.

In 2004 there were just seven events on the women's Championship Tour. Mulanovich had wrapped the season with three event wins and one runner-up. She won the World Title 900 points ahead of that year's Title runner up Rochelle Ballard.

Mulanovich is a stand-out in surfing's history - and not only for her competitive successes and her role in the evolution of women's surfing. She remains the only surfer from Peru ever to compete on the Championship Tour and she is the first South American to win a World Title. "Being the first South American World Champion is still like a dream," Mulanovich said. To this day, she doesn't quite believe that it happened.

"To be one of the greatest athletes of her lifetime in Peru, it's so huge," said 4x World Champion Lisa Andersen, who served as both mentor and rival to Mulanovich. "The impact she made in her country is probably one of the biggest stories in sports." Mulanovich began surfing when her parents moved their family to Playa Hermosa, a suburb of Lima. They became one of two families who lived in the coastal town throughout the year and Mulanovich absorbed her parents' passion for the ocean. "Everything was about surfing when I was growing up," she said. "I have surfing in my blood." She began competing around age 12 and often surfed heats against boys, because there were not enough girls to have their own event.

Between sessions at the beach outside her house, Mulanovich watched every surf video she could find. "I used to watch Momentum and those Taylor Steele movies all day long," she said. "I was obsessed by the sport." She knew every pro surfer's name and eventually, she could sing along with the music in the films' sections. In a country without surf culture of its own, Mulanovich sought to absorb everything she could. "Surf movies were my escape to that world."

When her mom took her to compete at the U.S. Open as a teenager, Mulanovich came face to face with the world she'd previously only seen on her television screen. It was her first encounter with pro surfing and with the frenetic industry that surrounded it. She remembers being too shy to talk to the pro surfers whose videos she'd watched so often. "The first time I went there, I got like, dead last," she said. "I was so disappointed." But Mulanovich did not give up. She went home and trained more and each year when she returned to Huntington Beach, her results improved. Mulanovich didn't have a clear path to follow into the sport that many juniors from Australia or the United States had. "It was going from Peru to the U.S. Open - straight to surfing against the big pros." At home in Peru, Mulanovich would imagine herself surfing against Andersen. "She was my idol," Mulanovich said. "Visualizing and watching movies, that was my school."

When Mulanovich was 14, her chance to surf against Andersen in real life came thanks to a wildcard she received into the 1997 Billabong Pro at Burleigh Heads, Gold Coast, Australia. Andersen recalls meeting Mulanovich in the first round. "I was definitely nervous surfing against her, I was kind of freaking, because she was ripping," she said. Already, Mulanovich had big, explosive turns and the two women went wave for wave. The heat turned on an interference call, due to Mulanovich's inexperience. "She was such a frothing grom," Andersen said. "I got her on the interference."

Andersen remained impressed with Mulanovich and helped bring her to the Roxy squad. The two women frequently traveled together and Andersen says Mulanovich always pushed her. "She was just a really cool, refreshing face - just so determined and such a surf grom," Andersen said. "You could definitely see that she was going to be the girl responsible for the rise of the next generation." Mulanovich remembers bouncing between surf trips and attending high school with braces on her teeth. After Andersen celebrated her fourth and final World Championship in 1997, Layne Beachley won six-straight World Titles. In retrospect, Andersen says it's amazing that Beachley dominated for so long. It wasn't for lack of competition. Women such as Beachley, Rochelle Ballard, Chelsea Handler, and Megan Abubo all pushed the sport forward. "I just remember they were running contests in bigger waves and girls were charging and pulling into barrels," Andersen said. "It was really eye-opening for a lot of people."

Mulanovich fit right in with this new generation. "She brought a spiciness and spark to surfing," Andersen said. After years of watching the Momentum Generation on video, Mulanovich sought to emulate what she'd seen on the screen. "I tried to be progressive with my surfing," she said. Mulanovich describes her surfing as "raw" and "powerful."

Until 2004, Mulanovich had yet to win a CT event. That year it was as though a floodgate opened. Her first ever CT victory came at Tavarua. At the Tour's very next stop in Tahiti, Mulanovich won again. A third straight victory came in France. Her three event wins put her in the running for the World Title with Beachley and Ballard. "Everything just happened so quickly and everything just went my way that year," Mulanovich said. At Haleiwa, the final Tour stop of the year, Mulanovich finished second to Beachley to secure the Title.

On the podium in Haleiwa, Andersen, then a Roxy ambassador, waited for her teammate with the World Champion's trophy. The two friends had a brief moment before the official ceremony and Andersen handed the trophy to Mulanovich. "I just remember crying and cheering," said Andersen. "It's one of those moments I'll never forget." It didn't feel real to Mulanovich. "I think it took me many years to actually realize that I won the World Title," she said.

Back in Peru, the World Championship brought Mulanovich more attention than she'd ever imagined possible. "I became really famous," she said. "I was really young and I had to learn how to deal with that attention and become a professional in every sense." She says the World Title changed her life and raised the profile of surfing in Peru. She made commercials for major brands in Peru and when she did contests in her home country, thousands of people would turn out to watch.

At home, Mulanovich became a symbol of hope. "When I was growing up there was a lot of terrorism," Mulanovich said. "We didn't have lights and we had to do homework by candlelight." The Shining Path, a militant leftist movement, had unleashed an insurgency beginning in 1980, and violence continued for the next ten years. Mulanovich describes the period as "a terrible time" for her country. Her World Title came as Peru had begun to leave the darkness behind. 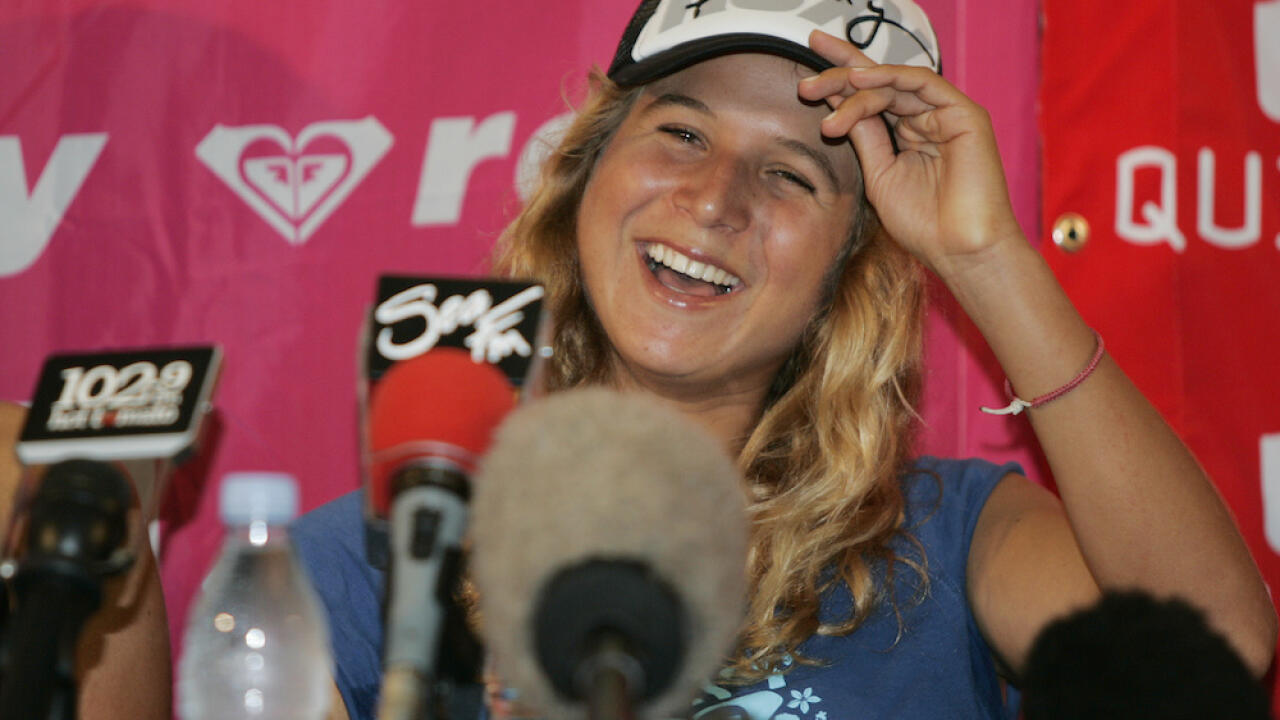 By the time Mulanovich ended her career in 2013, she'd won ten CT events, a World Title, and finished second in the world rankings on two occasions. "Being on the CT for eleven years and being able to surf against the best for so many years - that was awesome," she said. Mulanovich also treasures her memories of traveling and seeing new places. "Every free surf was magical," she said.

Though she stopped competing in 2013, Mulanovich wasn't done with surfing. Instead, Mulanovich embarked on an ambitious, three-year project to bring surfing to Peruvian kids. With the support of Swatch, she launched the Proyecto Sofia in 2014. "It was a nonprofit where I took the best surfing talent here in Peru and helped guide them toward surfing professionally," she said. In the first year, the Proyecto Sofia included ten surfers and Mulanovich especially sought out kids from underprivileged backgrounds.

When she looked at the ambitious young surfers who joined Proyecto Sofia, Mulanovich saw herself. "Just being in touch with kids who dream about becoming pro surfers and I could really identify with them," she said. "We share the same dreams." She could readily remember surfing everyday, watching videos of her favorite surfers, and imagining a career of her own. "I think it was really beautiful to give them all my knowledge, because I was there, too," she said.

Sofia Mulanovich Is Making Dreams Come True
5:32
The former World Champion and Peruvain legend is giving underprivileged kids a chance to chase their pro surfing dreams, and it's working.

The inclusion of surfing in the 2020 Olympics has refired Mulanovich's ambitions. "Surfing being in the Olympics is every athlete's dream," she said. Recently, Mulanovich began competing in regional contests again. She hopes to qualify for the 2020 ISA world championship, which serves as one route to Tokyo. "Just being able to go would be amazing," she said.

Whatever happens in Tokyo, Mulanovich takes pride in what she's accomplished so far. "I went after my dreams and believed it was possible," she said. "I came from a different part of the world for surfing - and I made it."