Going through my archives to put this piece together was definitely a trip back in time and one thing that stood out from the images of the Pipe contest were the number of goofy footers in the Top 45 at that time.

I can't remember this being a big deal but it stood out as I went through all the images, especially the last day of the contest which was predominantly lefts with a clean West swell hitting Pipe.

Both Finalists, Rob Machado and Lowey (Michael Lowe) were goofy but in the folders were guys like Cory Lopez, Kalani Robb, Glyndon Ringrose, Shane Werner, Renan Rocha, Guilherme Herdy, the Hobgood twins CJ and Damien, Beau Emerton all standing out.

Going back to the results of this event the goofy footers stood out and came out ahead in each round. Sure it was Pipeline on a West swell but when some of the best backhand tube riders in the world like Andy (Irons), Kelly (Slater) and a Pipe specialist like Bruce Irons were in the Event, I just found it very interesting that the ‘goofy' had dominated. 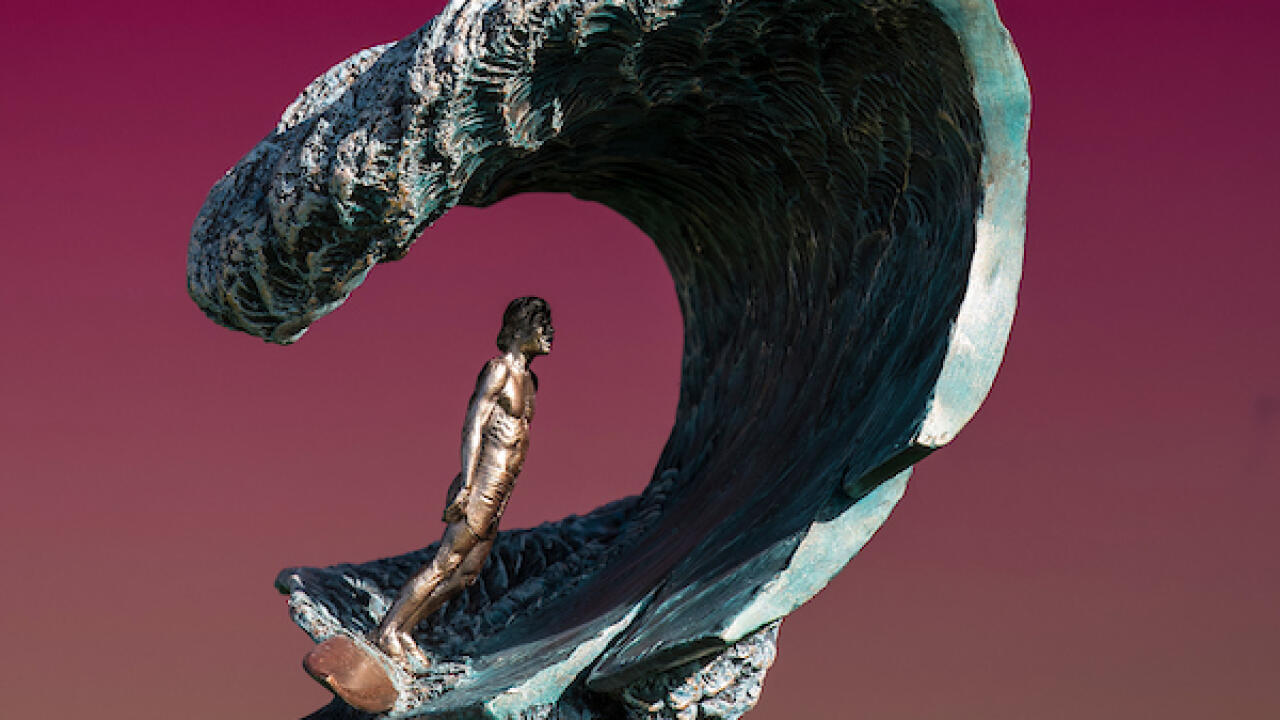 The running of the 2000 Pipeline Masters marked the Event's 30th Anniversary. The first Pipe contest held in 1971, which was basically a single six man heat was won by Hawaiian Jeff Hakman.

The Event ran each December and remained a single heat event until 1975 when it became part of the IPS Pro Surfing circuit and the format was changed. From very humble beginnings it has been run every year since and become one of the best recognised surfing events in the world. This year is its 50th anniversary.

The event has been linked from its very first year to one of the greatest surfers to ride Pipe, Gerry Lopez. Lopez competed in the contest 25 times and won it twice and an image of his classic forehand bottom turn under a pitching Pipe lip was immortalised by artist Phil Roberts with a cast bronze sculpture that has become on of the most prestigious and coveted trophies in professional surfing. 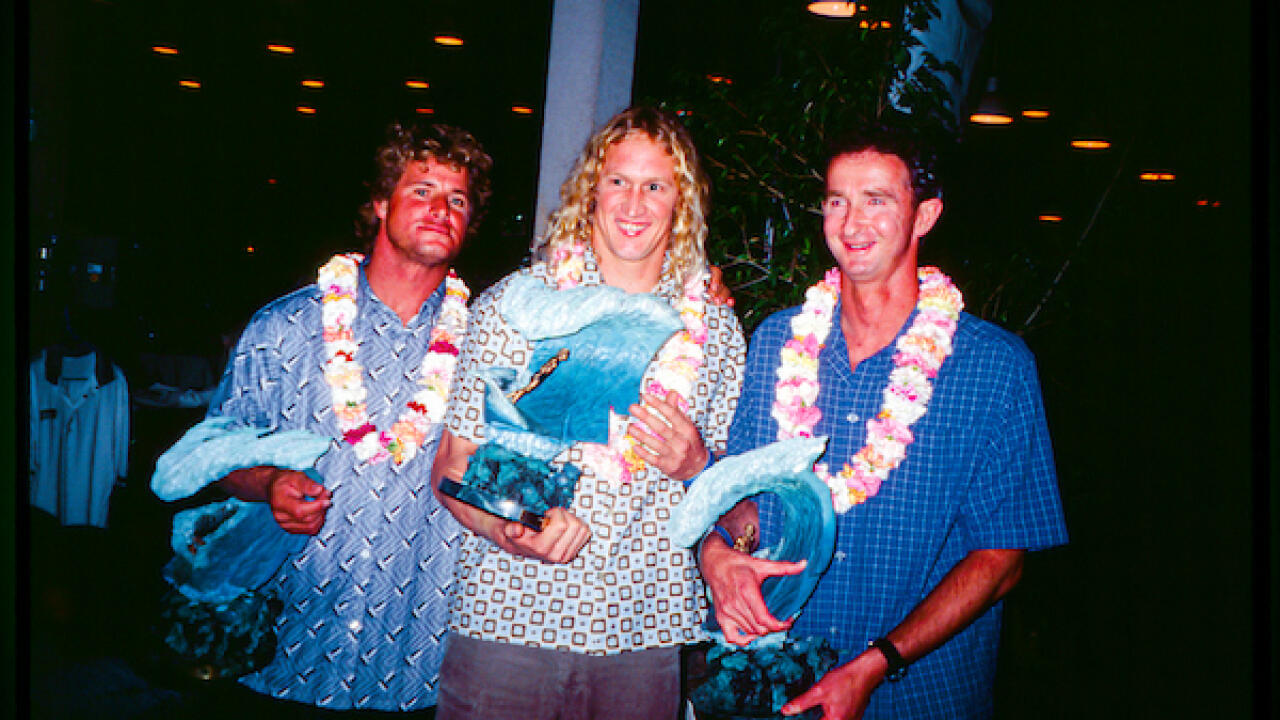 At the Opening Ceremony of the 2000 Pipeline Masters the organisers of the Vans Triple Crown invited all the former Pipeline winners from the ASP era 1980 - 1999 where they were each presented with a cast bronze Gerry Lopez Pipe trophy.

Mark Richards, who won Pipe in 1980 has memories from the 2000 opening ceremony "We didn't get any trophies the years we won… and the contest wasn't actually dedicated to Gerry back then because he was still surfing in some of the events with us ... actually I don't think I even got any trophy at all when I won so it was very special to finally have one"

Randy Rarick, former Director of the Vans Triple Crown where the Pipe contest is the final ‘jewel' remembers the night at the Waimea Falls Park, "… we had Phil Roberts design the trophy for us (and) if I remember right we gave one to all the previous champions, all the guys from the ASP era … after that year's event, we gave a Gerry Lopez trophy to each of the winners of the Pipe Masters from then.

The event was eventually dedicated to Lopez with his name in the contest title, The Gerry Lopez Pipe Masters, which continued for a number of years until it was renamed in honour of Andy Irons. The winners now received the bronze sculpture and a one-of-a-kind surfboard shaped by Lopez and painted Roberts which is more of a work of art than a functional surfboard. Rob Machado had been on the ASP World Tour since 1993 and had won numerous WCT contests around the World. He had finished Runner-up in the World Title race to Kelly Slater in 1995 but after nine years on Tour it was the victory in the 2000 Pipeline Masters that he claims as the biggest highlight of his career.

That December day was all Rob. To win he'd had to surf four heats in pumping Pipe and overcome Peterson Rosa, Andy Irons, Renan Rocha and Mick Lowe in the Final. The battle between Rob and Andy where he produced the highest total heat score of the event with 27.60 out-of-a possible 30-points against the Hawaiian in the quarters then produced a perfect 10 point ride against Lowe in the final to nail the win.

"It's a dream...." said Machado later. "I couldn't have asked for a better day. The waves were as good as they get and to come out on top is unbelievable."

"It was a huge goal in my life to win an event in Hawaii … I grew up idolising Gerry Lopez … just the lines he drew and all the other great surfers at Pipeline. I basically chose Pipeline to be the spot where I was gonna try and surf the most, and do well."

Just as it was a dream for Machado to win Pipe, runner up in the contest Michael Lowe had the same dream. On his very first trip to Hawaii he was staying with Mrs Joli and I on Sunset Point in a one bedroom, one bathroom apartment that had one pot in the kitchen a toaster not much else and also sharing the lounge space with four other teenage Billabong grommets on their first trip to the North Shore; it was like indoor camping. Yes, those were the days!

Lowey was determined to surf Pipe but his Mother was just as determined that he didn't. His Mother rang me before the trip and had me promise I'd look out for him and wouldn't let Lowey paddle out at Pipe. When Lowey found out he started to plead with me to break my promise. Luckily I got off the hook when Pipe didn't break at all during Lowey's time that year on the North Shore.

Due to his youthful enthusiasm surfing every break every day he did get told to ‘go in' by a notorious local which is all part of the passage! During sessions surfing at Backyards he met shaper Jeff Bushman in the lineup, forging a lifetime friendship and a love for the powerful Hawaiian waves.

His second place finish behind Machado in the 2000 Pipe Masters Final was one of the highlights of his Pro Surfing career. "A 2nd at Pipe is still unbelievable," said Lowey at the time. "I could have scripted it a bit better, but it's been one of the places I've always wanted to do well at, and Rob's a great surfer and one of my heroes."

His performance that day was highlighted by a perfect 10-point ride to eliminate Shane Dorian in the Quarters and followed up by taking out Bruce Irons in the Semi riding a Bushman shaped board. Pipe was about as good as it gets - Peter "Joli" Wilson

I've been heading to Hawaii's North Shore since the early 80's and have only missed a couple of Winters in that time. Looking back over all those trips I can only remember a handful of times Pipeline didn't produce for the Pipeline Masters but in most cases there was a West swell that came in during the December waiting period. The Vans Triple Crown runs over a six week period from early November through to late December and I don't know how many times there would be a Pipe swell until the waiting period started. The Director of the Triple Crown, Randy Rarick seemed to be blessed with good Pipe conditions year after year and 2000 was a perfect example. Right on time was a classic West swell with so much angle that Backdoor was not really an option. Round three through to the Finals were all run in one day. Six to eight foot, offshore, sunny and deep Pipeline barrels. With a packed beach it was the perfect way to crown a Pipeline Master and wrap up a Triple Crown. 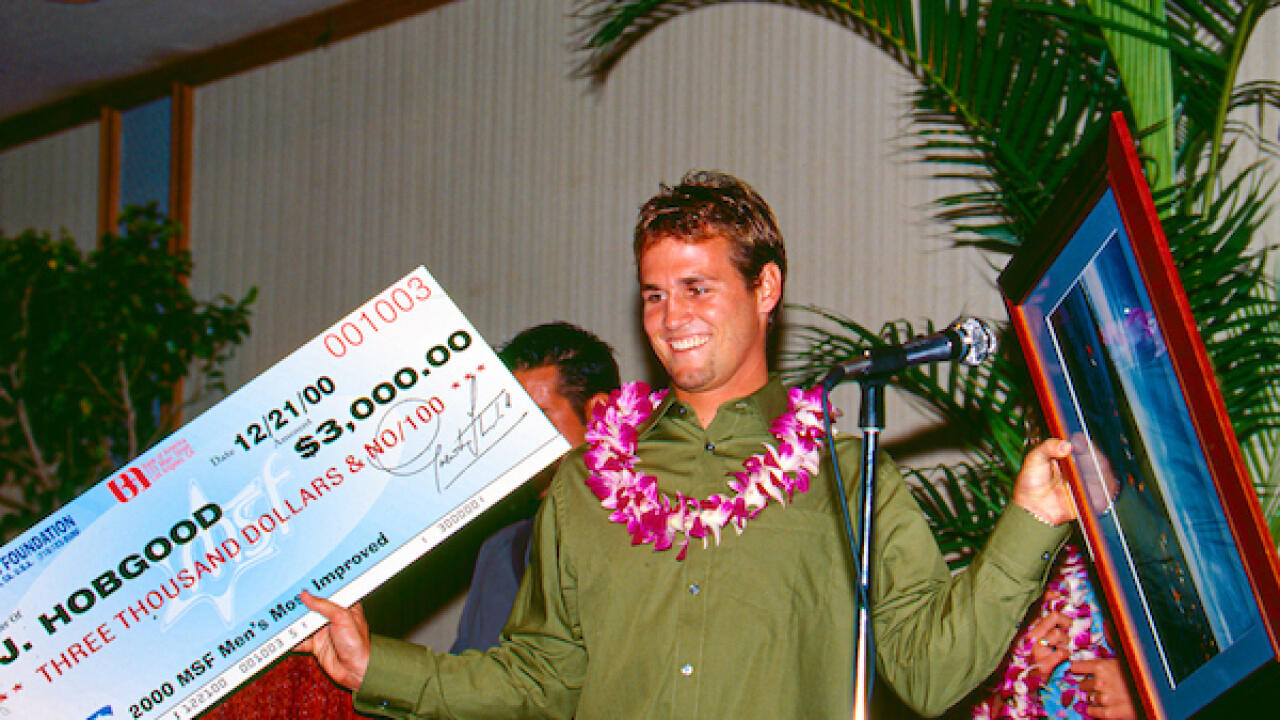 In 2000 the ASP Awards Banquet was held at the end of the calendar year in Hawaii and that year Hawaii had plenty to celebrate with two World Champions being crowned at the Awards Ceremony. Sunny Garcia, after 14 years on the World Tour took out a World Title, something he'd come so close to achieving in 1995 when all he needed to do was win one more heat during the Pipeline Masters and Michael Ho who at 43 won the World Masters Title.

At the same ceremony the Hobgood twins both took out Awards. Damien the Rookie of the Year Title and CJ the Most Improved. Layne Beachley also picked up her third of seven World Titles.

Champions of the 80's' Expression Session 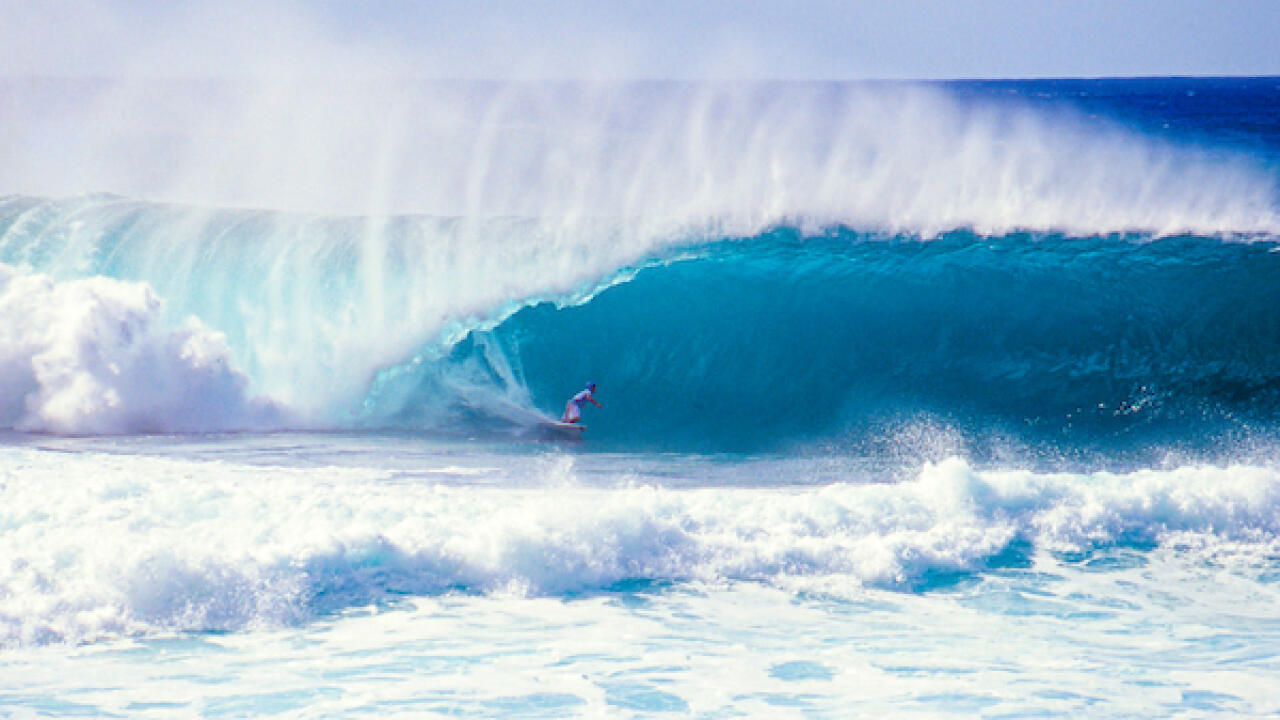 Talk about a star-studded expression session... i - Peter "Joli" Wilson

After being honoured at the Pipe Masters Opening Ceremony, the 1980's Pipe Masters got their chance to surf Pipeline on their own during the Semi's and the Finals of the 2000 event. They all showed their competitive fire was still there charging the Hawaiian size six foot west swell.

Three-time Pipe Master Tom Carroll, 1987 1990 1991 took a couple of heavy wipeouts during the Expression Session and loved being out there with just a few friends. Right through his career Tom never held back and took that attitude into the ‘friendly' heat coming unstuck after one late drop and getting cracked in the head trying to exit a barrel.

Fellow Masters Champ Simon Anderson, who rode his thruster design to victory in 1981 was still drawing lines on his backhand while Michael Ho, the 1982 winner showed his knowledge of Pipe with some crazy late drops, even going switch foot in the barrel on one wave.

This contest was 20 years ago now when Michael was 43 and to give some idea to his surfing skills there are photos circulating on Social Media from earlier this year of Uncle Mike at 63 years old still pulling into Pipe bombs!