Dubbed a "surfing saint" in his heyday by Australian Surfing Life magazine, Mark Richards (AUS) is a special guest at the Hurley Pro at Trestles. A four-time World Title winner, he has been at the desk to reflect on surfing's past and present, and introduce during the specialty Heritage Heat expression session. He recently discussed the attitude that kept him on top during his career, who kept him motivated and the changes he's seen in professional surfing.

World Surf League: What was the most significant moment in your surfing career?
Mark Richards: Winning the World Title in 1979 after only competing in selective events. Prior to that my chosen career path had been a part-time pro surfer and a full-time surfboard shaper. Winning in 1979 sent me on a quest to try to win a second Title, as at that time no one had won two.

WSL: Out of the expression session athletes, who was your biggest rival and why?
MR: I had some epic freesurfing battles with Shaun Thomson (ZAF) at Off the Wall in '77 and '78 where we would both stay in the water almost all day trying to out-surf each other, both hoping to get the nod from all the photographers on the beach at the end of the day.

Competitively, even though there were competitive moments with all of them, the one that really stands out is Cheyne Horan (AUS) as he was runner-up to me in the '79 World Title, and for my third and fourth Titles in '81 and '82 it was a see-sawing battle between us for the ratings lead.

Check out Cheyne Horan's biggest rival. Spoiler: It's not M.R.

WSL: Out of the expression session athletes, who inspired you the most in your career?
MR: To be brutally honest...none of them! As a competitive athlete you cannot be inspired by the surfers you are trying to beat on a regular basis. It is one of the main reasons that current day competitive surfers have struggled to beat Kelly for so many years: pretty hard to go out and smash someone when you are in awe of them.

WSL: You were key in "creating" pro surfing. What do you think about the state of professional surfing in 2015?
MR: It's gratifying to see that a decent percentage of the surfers can make a good living from the sport, which was the dream we had when it all started. But, when it comes to the webcasts, I don't really watch a lot of it. I think having a system with a losers round (so that people keep losing and coming back), just doesn't make sense to me.

Also, best two waves and in a tied situation, going to the best one wave, creates a 30-minute heat where you watch about 25 mins of sitting. There should be a minimum of the three best waves counted in a heat and in a tie it should go to best four. This would give a better overall reflection of who surfed best over the 30 minutes, not who happened to luck into the one exceptionally good wave that came through

WSL: Who do you think will win the World Title in 2015?
MR: I think it will go down to the Pipe Masters because there has been such a variety of different placings of the major contenders in the last few events. There have been a few surfers who have had a chance to run away with it so far but they haven't been able to capitalize on their ratings lead.

Check out the latest rankings on the Jeep Leaderboard. 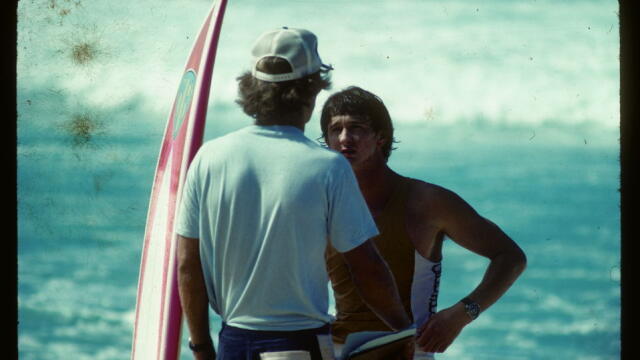 WSL: What was the toughest moment of your career?
MR: Deciding when to quit is possibly the hardest thing. Having a ticket on the Tour bus is one of the most amazing experiences you can have. Going back to reality of everyday life is not an easy transition after living the life of a pro surfer.

WSL: What is are biggest differences between competitive surfing now and when you were on Tour?
MR: There are so many... more consistent judging, better organization, more prize money, events in good surf as opposed to finishing on a weekend to draw a crowd. But possibly the biggest difference is the internet and social media and its reach in the world. It's quite amazing to be anywhere on the planet and watch a WSL heat in real time.

When I was competing after an event it was a quick phone call home to tell my parents the results -- as quick as possible as the cost of the call was so expensive! -- and a hand-written snail mail letter afterwards with all the details.

WSL: What's one thing you know now that you wish you'd known as a young competitor?
MR: A little more knowledge about the value of strength, conditioning, training, and diet. During my era we mistakenly believed that the only training you needed to do was to go surfing. I used to find that if I made it to the Final of an event that often by the end of the day my legs were gone. To combat this I used to run around a football field once every few days! And I thought I was killing it because I knew the other guys weren't. My diet also left a lot to be desired! A nutritionist would have been horrified.