One of the year's most anticipated Qualifying Series (QS) events, the Paul Mitchell Supergirl Pro QS 6,000, got underway in terrific fashion as three-to-four foot waves streamed into Oceanside Pier to start the day. Some of the QS's best up-and-coming threats displayed what they're capable of and sent off warning shots with big performances throughout opening day, completing Rounds 1 and 2 in their entirety. Kobie Enright made her return to Oceanside with a great debut performance. - WSL / Andrew Nichols

One of last year's Supergirl Pro top performers Kobie Enright finished with a Quarterfinal result and is back looking for more of the same. The Australian started off brilliantly in her Round 2 debut, posting a 15.23 (out of a possible 20) heat total, with powerful forehand surfing despite a wave-starved heat to begin. But, Enright's patience was key and she capitalized on both opportunities that came her way.

"I'm so stoked there was waves, I thought the swell was meant to drop a lot, but it's turned out to be beautiful day and it's great to get a start like that," Enright said. "This is one of my favorite events because I feel like it's one where all the girls come together and get behind each other. It's always nice to get a bit of momentum and of course you always want to do better than previous years, but to take it out is the goal and just hoping to do my best." One of Australia's next generation, India Robinson, is setting herself up for a big year. - WSL / Andrew Nichols

At just 17-years-old, Enright's fellow Australian countrymen India Robinson forewent her final Pro Junior year and committed herself to a full-time QS campaign -- and it's paying off. Robinson is currently ranked No. 28 heading into this event with a big result to start the year at the Florida Pro QS 6,000, and then winning the Mothernest Tweed Coast Pro. The Aussie got things started off in great form here, earning an excellent 8.17 (out of a possible 20) to earn a big win in her Round 2 debut.

"This is my first time here since I'm giving the QS a full go, and it's amazing," Robinson said. "Coming into this event, I definitely want to keep improving myself and make it through a few rounds while having fun doing it. I'm glad they were scoring the one major maneuvers because I come from bigger waves and when a section like that comes I just give it everything I've got to do it justice."

Californian's Answer Back for Local Supporters 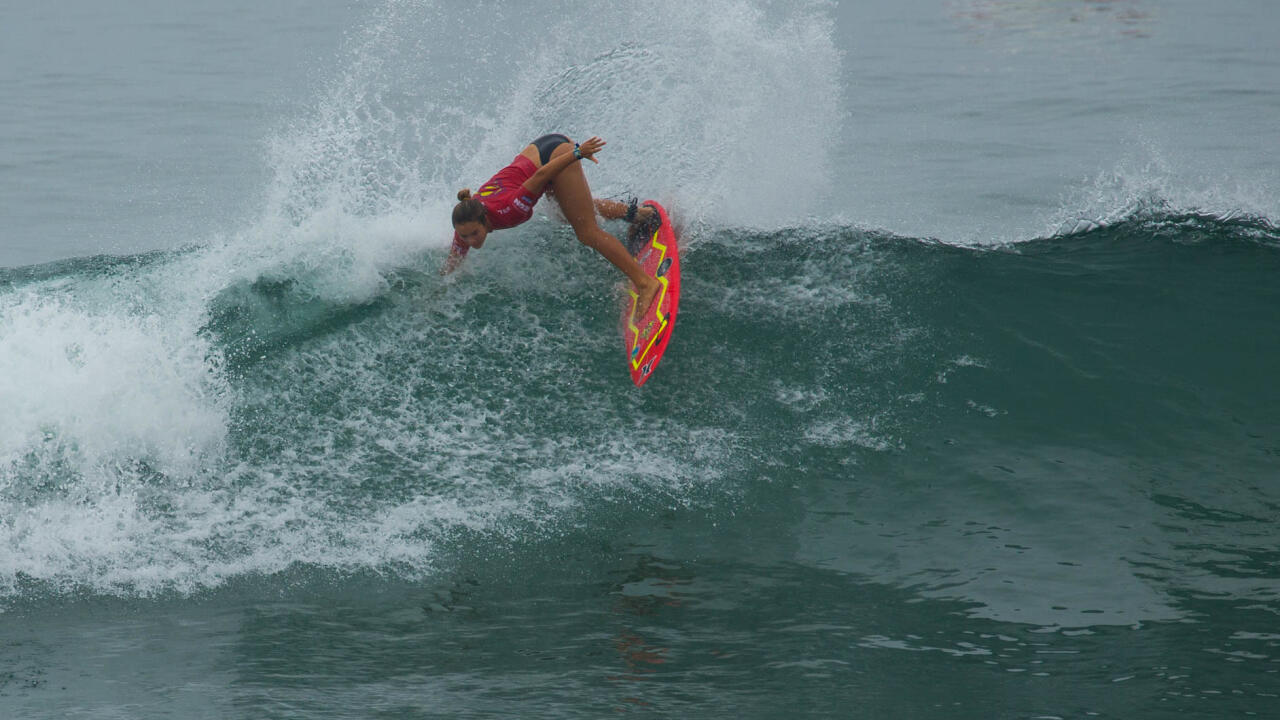 Meah Collins founder her groove once again and put on a dominant performance in both Rounds 1 and 2. - WSL / Kurt Steinmetz

Meah Collins put an end to the internationals dominance with a superb showing in Round 2 over Isabella Nichols, Felicity Palmateer, and Hinako Kurokawa. The Newport Beach, California, added that performance on top of a Round 1 victory to start the day and now carries serious steam into the weekend. It's been a tough start to the 18-year-old's first full year on the QS, but Collins knows what it takes to overcome those adversitie."

"I came into this contest just hoping for the best after I did really well here last year and now just want to do even better," Collins said. "This event feels like home being so close and I'm just trying to enjoy myself, keeping the competition face on of course. I'm just having the worst competitive year ever so I want to make the Quarterfinals and just see what happens from there, but keep a smile on my face at the end of the day." One of the younger North America contingent, Samantha Sibley, continues to show she's a threat to the QS elite. - WSL / Kurt Steinmetz

Hailing from just down the road, San Clemente, California's, own Samantha Sibley earned an impressive Round 2 victory of her own with a 14.07 heat total over an-form Dominic Barona, who also advanced, in deteriorating conditions. The 16-year-old continues a busy summer of competing after a handful of amateur events between the Los Cabos Open of Surf and here in Oceanside, but all the time spent in a jersey is only helping the young competitor. Now, Sibley's hopes of taking on the world's best are in action as she will face Nikki Van Dijk in her Round 3 heat.

"It was super fun to get through that one even though I was the last one to catch a wave, but the selection paid off," Sibley said. "Being patient was the most important thing in that heat since it was pretty lully and if you wasted priority on a smaller one it'd be hard to catch up later. I'm really excited and just hope to get a heat against one of the CT girls since they're my idols. The stacked list of girls in this event is insane and I'm just excited to try and keep going through more heats." But, Dimity Stoyle finished the day's heats off with an excellent 8.33 ride and was all smiles into Round 3. - WSL / Andrew Nichols

Nearly all of the elite-level surfers from the women's WSL Championship Tour will battle at the Qualifying Series contest this weekend.