It's the calm before the storm at the Burton Automotive Pro as competition ran through a day of small wind groomed peaks. All eyes have been on the surf forecast as the weekend has potential for 8 - 10 foot waves for an epic finish to the 30th Anniversary of Newcastle's Surfest. This year's World Surf League (WSL) men's event holds a Qualifying Series QS6000 rating and the Burton Automotive Women's Classic, a QS1000, could start tomorrow.

2012 World Champion Joel Parkinson (Coolangatta, QLD/AUS) scored a 9.07 for his first wave in his 2015 competitive campaign. Competition shifted 500 meters up the beach due to small conditions but there was still plenty of turn and air sections on offer. Parkinson used every ounce of his competitive fire and experience to take the heat win over three exciting up-and-comers with Parker Coffin (USA) advancing in 2nd position while Kanoa Igarashi (USA) and local surfer Jackson Baker (AUS) were eliminated in 3rd and 4th. "That was an unreal start - this year I'm really keen to give it a good go in all the events," Parkinson said. "I'm pretty happy to start the year with a 9-point-ride. There's starting to be a real buzz around the event, knowing there's a good swell coming. I knew I had to grovel through a couple of early heats and we will hopefully score some amazing waves this weekend. I was up against three really talented young surfers - one of them was Jackson (Baker) and he knows this place really well."

Deivid Silva (BRA) is enjoying his stay at Surfest, Newcastle thus far after he took out the Hunter Business Boardriders Pro Junior on the weekend and today won his Round 2 heat in the Burton Automotive Pro. Silva used the onshore wind to his advantage, launching and landing airs, finishing the heat with an 8.07 and 6.67. Newcastle's own Jake Sylvester also advanced in 2nd position.

"I'm so happy with my trip to Newcastle so far," Silva said. "I won the Pro Junior on the weekend and won my heat just now. The waves are hard and it's windy today so you just have to do your best. There's a big swell coming and I have some big boards ready to go. This is an important event and I want to do well." Hiroto Ohhara (JPN) posted the highest two-wave heat total of the day - 17.07 (out of a possible 20). Ohhara picked off the best waves and proceeded to surf fast and hard executing critical top to bottom turns and carves.

"I got two really good waves and did my best to make the most of them," Ohhara said. "I just picked up some really good boards from JS which helped out a lot and the waves I surf every day at home are very similar to this so I felt comfortable out there. I'm really enjoying this event, hopefully I can make a few more heats."

Davey Cathels (North Narrabeen, NSW/AUS) advanced behind Ohhara in spectacular fashion, jumping from 4th to 2nd place in the dying minutes. Cathels netted an 8.63 for his aggressive brand of surfing, tearing apart the wave and booking a ticket into Round 3.

"I felt really slow and sluggish at the start of the heat and I couldn't get any waves," Cathels said. "I had a couple little ones to warm up and then I got that last one and it threw up a couple of sections and I'm so stoked to get through - I thought I was gone. It's small and windy but it's really fun out there still, that last wave was great." 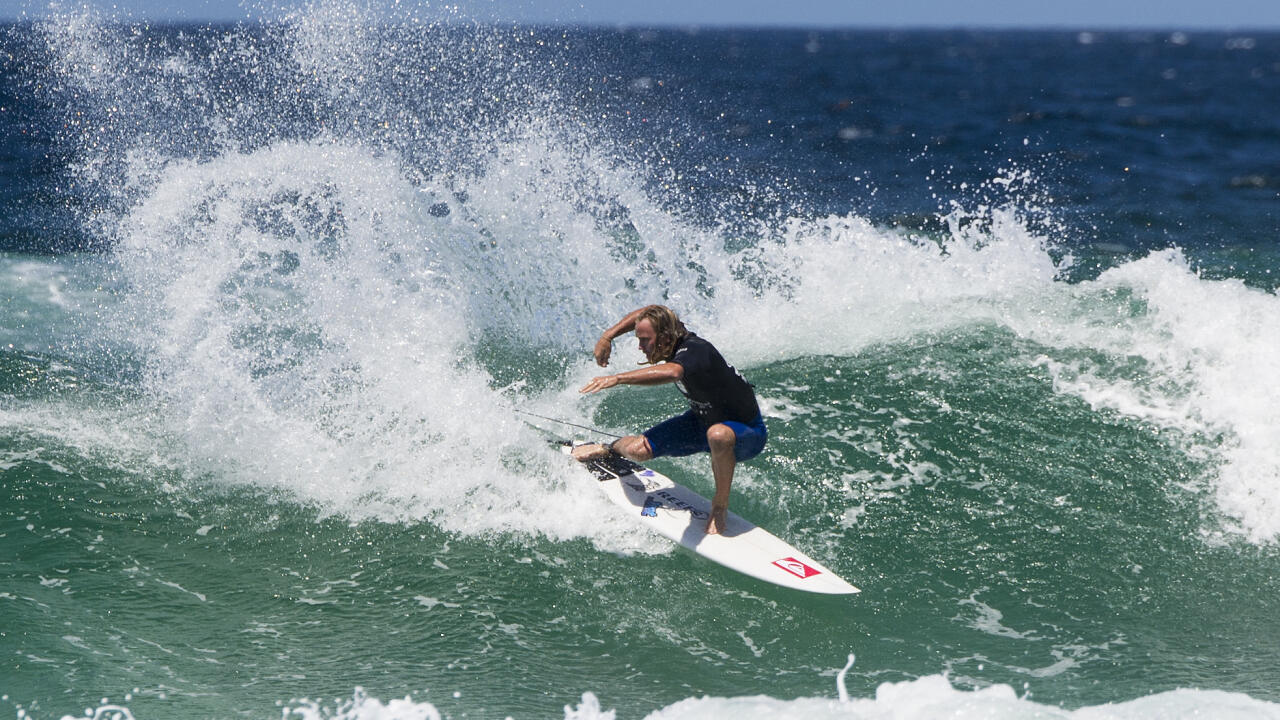 Finn McGill, Barron Mamiya and Seth Moniz set the pace on the first day of the Burton Automotive Pro QS 6,000 in Newcastle.